Is Maryland’s Schedule Tougher with Move to the Big Ten? 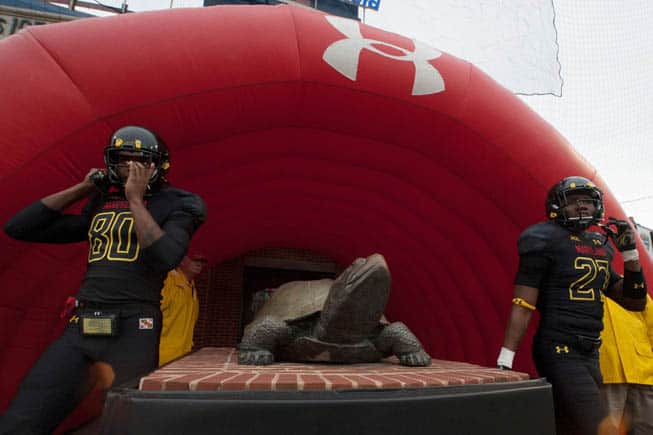 The Big Ten welcomes Maryland into its ranks this season, meaning that the Terrapins will play their first non-ACC slate since 1952.

Does the move to a Big Ten schedule mean that Maryland will have a tougher road to a division, conference or national title?

To answer this, it’s key to compare the conference and division that the Terps are leaving with the ones they’ll be joining.

Though there is a wide variety of ways to compare conference strength, wins and losses against other conferences is a good place to start.

Taking a look at bowl game success, where one league’s finest is pitted against another league’s best teams, the ACC has had an edge over the Big Ten over the last five seasons.

While the ACC does have a slight advantage, both conferences have struggled playing winning teams from other leagues. To illustrate, both have posted a winning record in bowl play only twice in the last five years — the Big Ten went 4-3 in 2009 and the ACC went 4-2 in 2012.

While the overall strength of the conference is important in gauging how Maryland will fare with its new schedule, the specific division is critical. These are the teams that the Terps will have to beat year-in and year-out to have a shot at winning any sort of title.

The two divisions share one striking similarity — they both are home to the two current powerhouses in each conference. In the ACC Atlantic that’s Florida State and Clemson, while in the new Big Ten East its Michigan State and Ohio State.

To illustrate, the last three ACC champions were Clemson (2011) and Florida State (2012 and 2013), while a whopping eight of the last ten Big Ten championships have been won outright or shared by a team that is in the new East division.

From a second-tier standpoint, the Big Ten East has the edge in strength with Michigan and Penn State versus NC State, Syracuse and Boston College from the Atlantic.

Though playing a Big Ten East schedule may be more difficult, top to bottom, than what Maryland faced in the Atlantic, the net effect is the same — with the big boys in the same division, every season’s schedule is going to be brutal. And winning the division is just as difficult as winning the conference.

Before the ACC expanded to 14 teams in 2013, Maryland played three cross-division games, a number that went down to two last season. This is the same set-up it will face in the Big Ten — six in-division games and then two games rotating between teams from the other division, in this case the West.

So, where the Terps drew two games each season from the Coastal pool of Duke, Virginia Tech, Miami (Fla.), Georgia Tech, North Carolina, Pitt and Virginia, as a Big Ten East member it will draw from Illinois, Iowa, Minnesota, Nebraska, Northwestern, Purdue and Wisconsin.

Again, the set-up is similar across the two conferences. The Atlantic is anchored by Virginia Tech complemented by a rotating cast of programs which jump up and have strong years from time to time, while the West features heavyweights Nebraska and Wisconsin with guest appearances by Iowa and Northwestern.

Though the Big Ten West might look more difficult on paper, it’s worth noting that it didn’t have a member hit double-digit wins in 2014 and three of its seven members weren’t even bowl eligible. By comparison, the ACC Coastal had one double-digit team (Duke) and all but one (Virginia) achieved bowl eligibility.

What this means for Maryland this season is that its 2013 cross-division games against Virginia and Virginia Tech will be replaced in 2014 with Iowa and Wisconsin.

Though the Big Ten is generally advertised as a tougher league than the ACC, recent results indicate that the gap between the two is narrow.

Think about it this way — the ACC is 3-2 in BCS play since 2011 while the Big Ten is 2-3. The last time the Big Ten sent a team to the national championship game was Ohio State in 2008, while for the ACC it was Florida State in 2013. And, of course, the Buckeyes lost to LSU while the Seminoles won the big cheesy enchilada over Auburn.

Even though comparing ACC schedules to those in the Big Ten isn’t as simple as apples-to-apples, the numbers don’t lie — the ACC is just as competitive as the Big Ten, especially over the last two seasons.

What this means for Maryland is its Big Ten debut might turn out to be better than expected. In other words, don’t assume that the migration means we won’t hear from the Terps again for several years, like when Arkansas moved to the SEC.

It won’t hurt that Maryland returns 17 starters in 2014, the second most in the Big Ten and the sixth most in the entire nation.

You can’t really ever go off bowl records. The B10 plays almost all SEC schools in their bowl games, while the ACC has played plenty of American/Big East schools. I think if you compare the ACC to the B10 by bowl opponents, you would see the competition is definitely tougher for the B10 in previous years.

I overall agree, the B10 West is tougher, but not as much as you might think. The gap is narrow and I wouldn’t be too shocked if Maryland actually made SOME noise…

The acc atlantic has two strong teams in FSU and Clemson. The big ten east has Ohio State, Michigan, Michigan State, and Penn State. Once Penn State comes back from the effects of sanctions that will be a tough game for the terps, Historically Penn State is a top 20 team.
That generally means there are 4 games within the Big ten division, Maryland will be a big underdog versus only 2 games within the Acc Atlantic that Maryland is a big underdog.
Another thing I didn’t see mentioned is that the Big ten is going to a nine game conference schedule while the ACC stays at 8. It seems like the writer of this article started with the premis of making the argument that the Acc is tougher and built the story around proving that.

Maryland struggled in a “weak ACC”, so if the ACC is weaker than the BIG 10 they’re in for some rough seasons ahead especially with the division their in. They’ll have to be careful if not they’ll end up looking like Purdue. But if they play this right and get some high quality athletes in their recruiting classes then they just might turn themselves into one of the more dominant teams in the FBS, however, that seems like a bit of a stretch to me.

ACC sent 43 players to the NFL this year.. BIG? 30. That is a giant difference. The ACC is far and away a more talented conference. Lets see how Maryland does. That aside you have to remember that Maryland played only 8 conference games in the ACC and will play 9 in the BIG. While playing only 8 in the ACC most ACC schools play a stronger OOC schedule to accommodate.

Jason you need more than one draft….

When was the last time the big 10 won a National Championship?

Idk, when was the last time Ohio State was relevant? That’ll be your answer.

This year. Is that current enough for you?

From a historic perspective, Maryland is 7-48-1 all-time versus the teams they will share a division with in the B1G. 4 of those wins were against Rutgers.

I attended the last Penn State drubbing of Maryland in the early 90’s. I think the final score was 73-7 in favor of Paterno State. I never thought that I would see the day that Maryland was going to schedule games against Penn State again. Television and filling the home seats with opposition fans is what is driving the administration to make these nonsensical moves. :)

as an alum, I have been opposed to this conference switch since it was first announced. we have an interloper school president from the B10 forcing this on the school because he has no roots or ties to the ACC. this is going to backfire badly.

Historically, the ACC is a premier basketball conference, while the B10’s strength has been football. This does not mean the B10 is a pushover in basketball. Over the years, the ACC typically sends 2-3 teams to football bowls, while the B10 sends 4-5 teams to bowl games. I agree that Maryland is going to have a rough time in the B10 until it recruits more top-notch football players. Until then, I suspect Maryland will be at best a 50-50 team in B10 football.

yes, B10 is much weaker than the ACC

MD will do much better in B10 than ACC, and if they can become the B10 school of choice for the athletic/southern players that do not go SEC or ACC, they may dominate the B10 in a few years.

Looking at MD’s brutal schedule in 2015. I think that stretch of 7 consecutive games against strong bowl teams will be the toughest schedule in the nation. Just a juggernaut of historically powerful programs. If they can go 3-4 in that stretch, they might be able to get to a decent bowl game. Their non-conf games are not cupcakes.