Is LSU’s Schedule the Key to Its First SEC Title Since 2011? 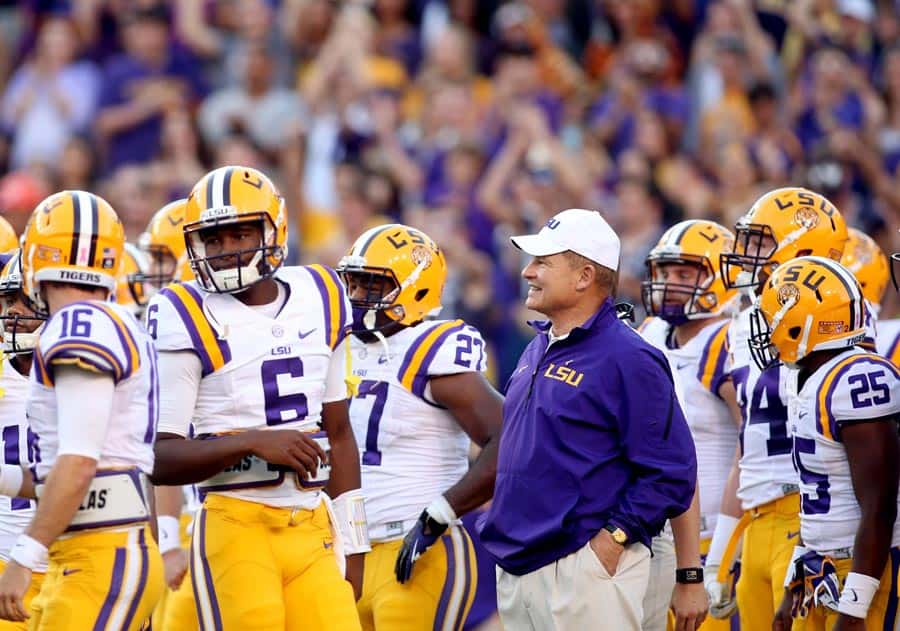 If that weren’t enough, the Tigers’ stiffest non-conference action this year comes via a Week 4 road trip to Syracuse, a team that hasn’t been mentioned in the AP rankings since the end of the 2001 season. The balance of the non-SEC slate is Eastern Michigan—a team that hasn’t gone over .500 since 1995—and Western Kentucky.

LSU does have road trips to Mississippi State, South Carolina and Ole Miss, but gets Auburn, Florida, Arkansas and Texas A&M at home.

The only real drawback are the two teams it drew from the SEC East—Florida and South Carolina—both formidable foes, but both teams who won only seven games in 2014.

Regardless, top to bottom it’s the Tigers’ easiest schedule since 2008, when they played all of their non-conference games against non-Power teams (FCS Appalachian State, North Texas, Tulane and Troy) and got Alabama, Ole Miss and Georgia at home.

Does it add up to LSU’s best chance at winning the SEC since 2011 or, at the very least, a return to the land of double-digit wins, a feat it last achieved in 2013?

Though it seems logical, history offers another opinion. Take a look at the Tigers’ regular-season schedules during the high and low points of the decade-long Les Miles’ era.

Here’s a breakdown of the regular-season schedules during these years.

Is it any coincidence that LSU won the most games during the two seasons it also played the highest-ranked non-conference opponents (the No. 9 Hokies and No. 3 Ducks) it’s faced since 2005?

If that weren’t enough, it’s also the two years the Tigers played the most regular-season ranked foes—six in 2007 and a whopping seven in 2011. The only other season that comes close is 2010, when the Tigers squared off with six ranked teams and finished 11-2.

What’s also compelling is the fact that LSU played 10 Power opponents in 2011—adding West Virginia to its game with Oregon—one of only three times it has done so in the Miles era. The other years—2005 and 2010—both ended with 11-2 records.

Take a look at who the Tigers played in the eight-win years.

Is it any coincidence that 2008 is also the only year in the Miles’ era that LSU hasn’t played a Power team out of conference? And while last season’s opener vs. a ranked Wisconsin team at a neutral site wasn’t a picnic, did you know that the Tigers haven’t lost to a Big Ten foe in the regular season since 1988, when they traveled to Columbus and got edged 36-33 by Ohio State?

2008 and 2014 also represent two of the only four times Miles coached teams have faced fewer than five ranked foes, playing just four in both seasons. The only other times this happened was in 2009 (the 9-4 finish), when the Tigers played a decade-low three ranked opponents and in 2006 (an 11-2 campaign), when they also faced four.

What it all adds up to, historically speaking, is that LSU has achieved better results when its schedule is the most difficult. That is, at least under Miles.

While this doesn’t definitively mean that given its “easier” 2015 slate that the Tigers will fall short of their goals of an SEC crown and a place in the CFB Playoff, it does make you wonder.

Do some teams defy conventional wisdom by playing better and winning more when things get tougher? Or is greatness easier, and more likely, when cupcake consumption is up?

Ive noticed that this writer routinely doesnt seem to understand that non conference games are irrelevant to conference standings.

Seems she is referring to the toughness of Alabama’s opening game affecting possible affecting them later down the line, i.e. injuries and/or mentally.

commentators at LSU-Florida, said the Tigers’ remaining schedule is the toughest in the nation. Even with one “cupcake” game, LSU has one tough row to hoe each weekend. Chances are LSU and Florida will meet in the conference championship game. God, I hate rematches. The team that lost in the regular season, has an immediate psychological advantage. Who can beat Florida in the east?

I would think the way Florida is playing that Georgia will be the only team to beat them in the east, if the Gators get passed them then I call Florida in SEC Championship game, just can’t see Vandy or Gamecocks pulling it off. LSU has a tough road a head of them, please don’t count them in already.

The LSU Tigers will have to do it all themselves, but I have faith.