Is Bob Stoops the most underrated coach in the BCS era? 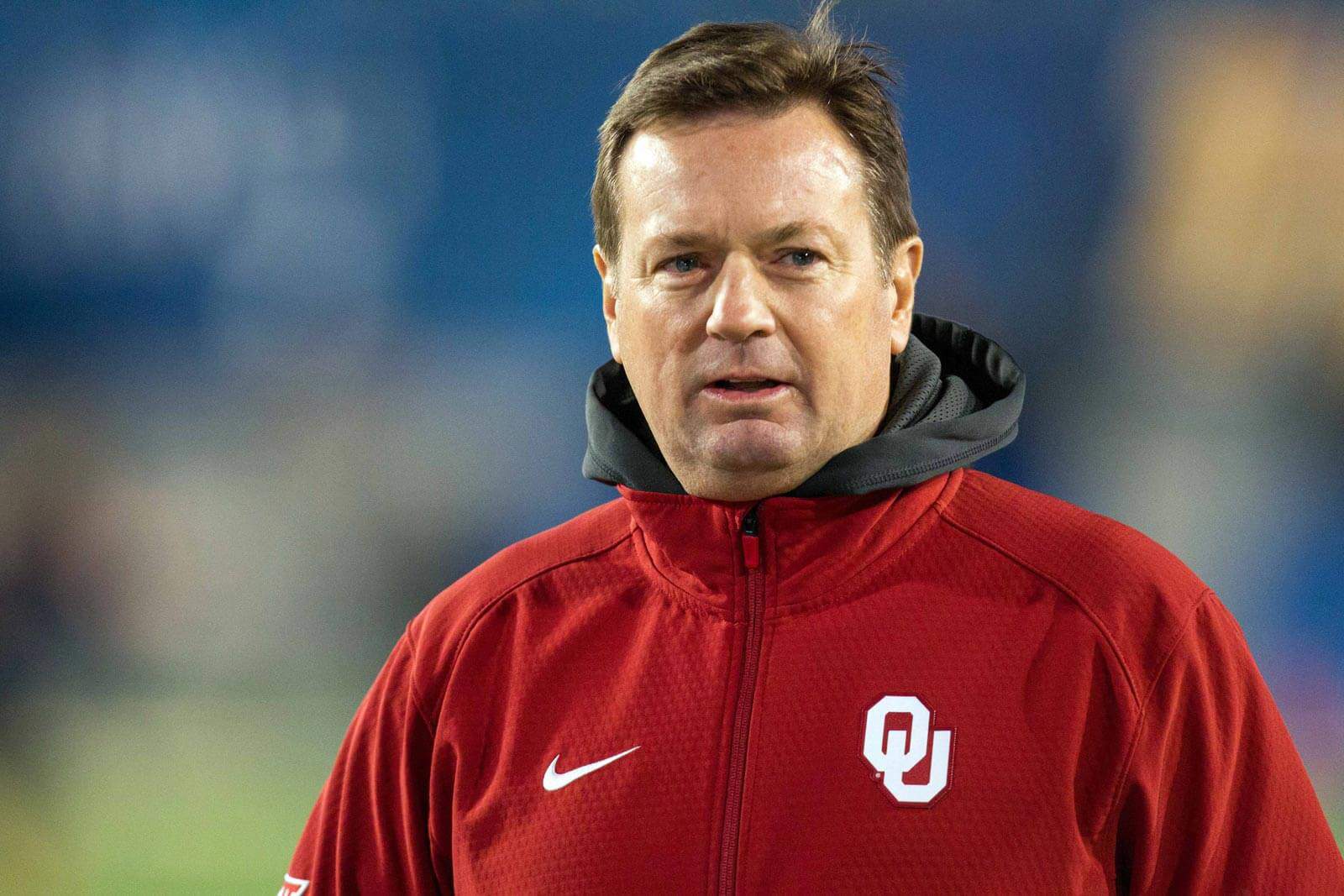 I know I have a lot to learn, but it hasn’t felt overwhelming and hasn’t felt that different, really.

According to Tyler Palmateer of the Tahlequah Daily Press, those words were among Lincoln Riley’s first as he took over the reins of the Oklahoma Sooners football program this past June.

Riley has never been the head coach of a football team, at any level, but suddenly he’s getting a cool three million dollars to lead one of the most storied programs in history.

Riley walked on as a quarterback at Texas Tech in 2002, never accumulating any stats. He was a student assistant, graduate assistant, and wide receivers coach in Lubbock from 2003-09, all under Mike Leach. He spent from 2010-14 at East Carolina as the offensive coordinator and quarterbacks coach before landing at Oklahoma as the OC in 2015.

Now, after two seasons in Norman, he’s got a huge pair of shoes to fill.

Is it safe to assume that Oklahoma’s powerhouse football program won’t miss a beat with the change at the helm? Is Riley, who turns 34 in September, capable of ensuring that the Sooners don’t slip off the national radar? It’s something they haven’t done since Stoops took over for John Blake in 1999 after the team posted a 12-22 record from 1996-98.

Here’s what The Oklahoman’s Berry Tramel had to say about the transition (in a podcast with SportsDayDFW’s Kevin Sherrington).

So the program’s in great shape. They had a guy they could hand the program to that would keep everything running, the same staff, the same foundation – I think that was important…

The truth is, it would have been more of an upheaval to this 2017 class if Lincoln Riley would have left instead of Bob Stoops.

Admittedly, the last remark references recruiting, but the overall tone of the interview, and of so much of the press surrounding Riley taking over for Stoops is that it isn’t that big of a deal.

Bob Stoops’ 18-year run at Oklahoma illustrates how the college football world can begin to take brilliance for granted. Despite achievement after achievement, Stoops seemed to draw fewer accolades than other successful coaches as his tenure drew out.

He also faced criticism from Sooner fans. Here’s what NewsOn6.com had to say after the 2012 season.

When the Oklahoma Sooners wrapped up a solid but unimpressive 10-3 season by getting blasted in the Cotton Bowl by Texas A&M, Sooners fans everywhere howled.

The arguments for change came swiftly and forcefully: Bob Stoops should be fired; OU is getting lapped by too many programs in the recruiting game; certain assistants need to be let go. Some of the arguments were legitimate, others not so much, but the consensus among fans was it would take a lot for Bob Stoops to actually initiate change in a program defined by loyalty and solidarity.

The statistics for each include only those earned at each coaches’ destination job, therefore they don’t include Saban and Brown’s previous records at other schools.

Out of the 10 categories, Saban is the leader in seven, Stoops wins two and the pair is tied in the final – losing seasons.

Stoops’ only statistical triumphs are in home record (he’s 101-9 vs. Saban’s 63-7) and conference championships (he won a title 56% of his years at Oklahoma vs. Saban’s 50%). Though he leads in the number of Top 10 finishes, technically Saban’s achievements trump Stoops’ because he’s hit the mark more often in fewer years (90% vs. 61%).

Worth nothing is that Saban still has eight seasons remaining to catch Stoops. All-in-all, Saban’s coached 138 games at Alabama vs. Stoops’ 238 at Oklahoma.

So, while Saban’s numbers are better, Stoops sustained the success for longer. To be fair, the numbers will require revisiting once Saban finally steps down.

What Stoops does do is beat Brown (who he coached against in all but two seasons) and Swinney in every category except three; road games, vs. the Top 10, and national titles.

Brown is four percent better in road trips, but he led the Longhorns into 10 fewer away games than Stoops did at Oklahoma. In Top 10 action, Swinney leads the way, but again he’s had less experience facing Top Ten opponents, recording 16 such games vs. Stoops’ 37 and Brown’s 31.

It’s no surprise that Stoops comes up shortest in national titles – one of the major complaints against him at Oklahoma. Though the three are tied at one apiece, Stoops had two more seasons to make a run than Brown and nine more than Swinney.

If you’re thinking, “What about other active guys?” only seven other Power head coaches have been at their current post 10-plus years (Iowa’s Kirk Ferentz, Kansas State’s Bill Snyder, Michigan State’s Mark Dantonio, Northwestern’s Pat Fitzgerald, Oklahoma State’s Mike Gundy, TCU’s Gary Patterson, and Utah’s Kyle Whittingham). None of them have numbers that come close to Stoops’, much less Saban’s.

The final comparison worth making is that of programs who have said goodbye, one way or the other, to successful coaches only to suffer subsequent pain and obscurity.

It’s an experience shared by both schools who handed the reins over to someone with head coaching experience (think Charlie Strong at Texas and Rich Rodriguez at Michigan) and those who promoted a young protégé with zero background as a head (think Will Muschamp at Florida).

The final tally to mention is 30-9 (78%) – that’s Stoops’ record in his final three seasons as the head coach at Oklahoma.

Though it’s impossible to predict how Lincoln Riley will do, it’s also logical to assume that the transition at Oklahoma won’t be seamless.

all of those schools need to have several losing seasons to come down to earth to see what reality is like. wouldn’t it be great to have a national champion that is NOT one of those schools? YES IT WOULD! I can only wish Bob Stoops, who was a GREAT coach, the best of everything. He deserves it.

This doesn’t mean Bob Stoops is underrated, it means that he was already correctly rated.

Pretty much everyone already thought that Stoops did a better job at OU than Mack Brown did at UT.

The problem for Stoops in the end was that his early success was followed by a bunch of falling short kind of seasons and for Alumni and psycho crazy fans his successes just didn’t count where it mattered most. National championships. However, before he got to Oklahoma the program was in decline then he gets there and they’re a National Champion again but just that once and that’s just not good enough for some people, especially when you have people that want to compare every other coach to Nick Saban. Bob Stoops is one of the greatest coaches to grace college football and his record speaks for itself. Everyone remember 2013? Yeah, Stoops out coached Saban in that head-to-head match up. In the last four years he recorded a 39-11 (0.78%) record with two Big 12 titles and two Sugar Bowl wins against SEC teams ( Though Auburn shouldn’t have been there, but hey slim pickings in the SEC in 2016 except for Alabama). Final thought is good for Bob Stoops going out on his terms as a winner ( No losing season at Oklahoma! WOW!!!)!

Look at Stoops’ records after his brother left to coach at Arizona. Very telling. Great coach but not underrated.