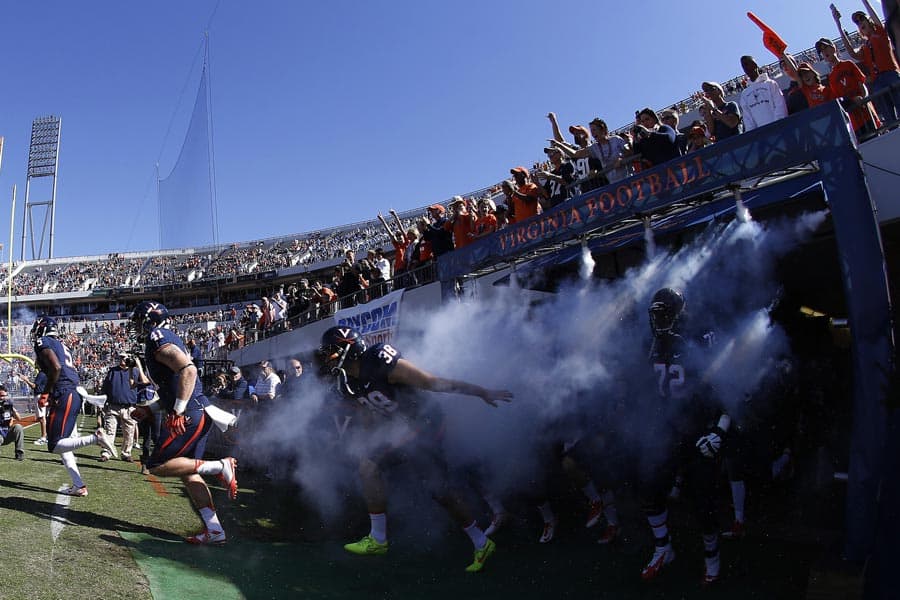 The Indiana Hoosiers and the Virginia Cavaliers have scheduled a home-and-home football series for 2017 and 2018, the two schools announced today.

In the first game of the series, Indiana will travel to face Virginia at Scott Stadium in Charlottesville on Sept. 9, 2017. The Hoosiers will then host the Cavaliers at Memorial Stadium in Bloomington on Sept. 8, 2018.

Indiana and Virginia have only met twice on the gridiron. The Cavaliers won both games of the home-and-home series, 47-7 in Charlottesville in 2009 and 34-31 in Bloomington in 2011.

“As I have previously noted, like IU, the University of Virginia is one of the premier public universities from one of the top conferences in the country. In addition to previously announced series against UConn (2019, 2020), Cincinnati (2021, 2022) and Ball State (2018-2020), this matchup is appealing to our players, alumni and fans,” IU Vice President and Director of Intercollegiate Athletics Fred Glass said.

For Virginia, the series with Indiana replaces two previously announced games against Stanford for the same two seasons and dates. According to UVA’s release, a “scheduling conflict” resulted in the cancellation of the games.

Indiana, which can only play three non-conference games per season beginning in 2016, is slated to host UMass in 2017 and Ball State in 2018. The Hoosiers need one more game for each season.

What happened to the Stanford-Virginia series? This seems to replace it

It’s in the article.

Who cares about this matchup. They are 2 of the worst teams in their respective conferences. This would be a great Hoops matchup, but football? I don’t think so.

Have to agree with PeteF3, NutSac you’re maybe more of a NutSac then you realize. Good game for so many reason. These two teams are from the ACC and B1G, where they are trying to build legit schedules.

Here me out everyone, this post is a tad long, but broken into paragraphs so easily readable. The point of it is not to point out supposed conference superiority, but a desire for better games and a batter product for our beloved college football.

PeteF3, that is funny. Sniffy, I think you are looking at it the wrong way.

I think these types of games give way to less speculation and more analysis. It is always easy to say that, The #3 team in my conference would beat the #6 team in yours.”

Here is my take:

The reason why more of these games need to be played is for the committee to have more subjective material to analyze. (Though wether or not they do, that is speculative).

SEC East Champ Mizzou lost to Indy and got stomped at home by Georgia. Georgia also lost to (6-5) Florida and (6-6) USC.

So it is fair to say that Indy could have pulled off a similar (6-6) year in the SEC East along with their 2 non-con wins. They would just need 3 more wins out of 7 against the rest of the East and A&M and Arky from the West.

Or, to make it easier. By TCU scheduling a decent, but not spectacular squad Minnesota squad, they were bumped ahead of Baylor, even though they lost straight up to the Bears.

The reason being the committee got to review a broader body of work.

Too much emphasis on being unbeaten and even more so on the mythical conference superiority.

FSU finished 13-0 and were mocked because of the perceived weakness of the ACC.

In my opinion FSU finished 13-0 because they faced down UF and OSU squads, and the enigma of enigma’s, ND. Either way, no one else had 11P5 teams on their regular season schedule and 3 P5’s non-conference to boot.

Had it been another season, I do not believe FSU, nor many other teams would have been able to beat Florida, Notre Dame and Oklahoma State in addition to their eight other regular season games regardless of conference.

It was luck, and a lot of Jameis, for good or ill.

I would like to see all teams run a similar gauntlet of a regular conference schedule, plus at least 2 P5″s. Some detractors will whine about the blue-bloods just playing Wake and Vandy.

If it becomes policy that 2 P5’s are required and after a season or two when everyone ascertains that going 11-2 and being invited to the playoff is still viable, we hopefully will see a marked improvement in non-con schedules.

I meant to say, it was a lot of luck, a lot of Jameis, and that schedule. There was no room to doubt they put their cards on the table and played all comers. That is the point.

And, I think they would have been exposed way earlier than in the first round against OU.

@JackStriker – I agree in most to what you have written. Whereas the Indiana vs. Virginia match-up in itself may not be so interesting or important, it is another gauge to rank/judge Conferences and their teams against other Conferences and their teams. When a P5 Conference team is only playing eight conference games and then slating three of their four non-conference games against the “Little Sisters of the Blind & the Poor” really truly nothing is learned for ranking purposes. These “tune-up” games are important for a team to prepare themselves for their conference games and opponents of major conferences, but should not be viewed or counted towards any ranking consideration. An example of frustration would be how a team from say the SEC will play a team for the Big South Conference late in the season and we as fans are to take that seriously? Come on that’s a joke.

“As I have previously noted, like IU, the University of Virginia is one of the premier public universities from one of the top conferences in the country.”