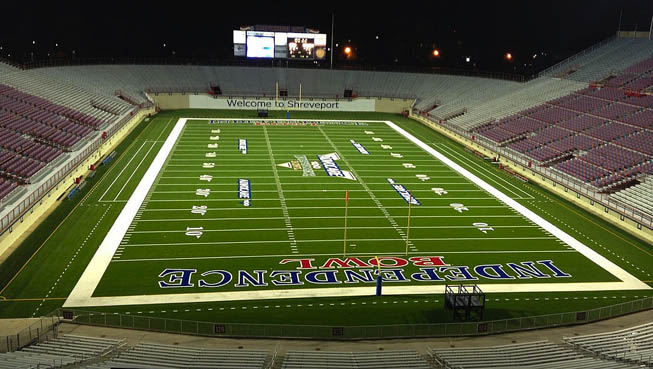 Earlier this week, we learned that Nashville is planning a college football kickoff game featuring a team from the SEC. Now comes word that the Duck Commander Independence Bowl is also considering their own kickoff game.

The early-season kickoff game would be played at Independence Stadium in Shreveport, Louisiana. The stadium, which hosts the Duck Commander Independence Bowl, has a capacity of 49,427.

Duck Commander Independence Bowl Chairman Paul Pratt says they want to start the game in the fall of 2015, and they would like local teams to participate.

“We’re hoping to use a Louisiana team,” Pratt said. “If it’s ULM or Grambling or (Louisiana) Tech playing someone from Texas, I think that will be a great match-up.”

But in order for the game to be played, bowl officials need a proposed hotel occupancy tax to pass. The additional revenue would give them the ability to create and host the game.

The addition of a kickoff game in Shreveport would bring the total number of kickoff games to five for the 2015 season. Games are already planned for Arlington (Alabama vs. Wisconsin), Atlanta (Auburn vs. Louisville), Charlotte (North Carolina vs. South Carolina), and Houston (Arizona State vs. Texas A&M).

Tennessee and UAB will open the 2015 season at LP Field in Nashville, but it will be a virtual home game for the Volunteers.

The 2015 UAB/Tennessee is NOT a virtual home game for Tennessee. Both universities are roughly 180 miles from Nashville.

Evan look that may be true but in Nashville, that is Tennessee country and what he was saying is fanwise it be a defacto home game, meaning there will be more Vol fans than Blazer fans

It’s a virtual home game because it is UT’s home game, but moved to Nashville. It was previously scheduled for Knoxville. The Vols will have 80-90% of the tickets and fans.

This isn’t a “kickoff classic” type game where there is an even split of tickets.

Even if it was kick off, still be Vol fans would out number Blazer fans

UAB has no fans

The North East needs a new Kickoff Classic ay either Yankee Stadium, Boston, Philadelphia with an Eastern School vs a Big 10 School?

The Yankees aren’t going to allow a game to tear up the field in the middle of the season.

If the UAB/Tennessee game was at Legion Field it would still be a virtual home game for the Vols.

Half time entertainment will be a mass same-sex marriage. instead of wedding bells it will be duck calls.

same sex morons do not belong in football, so RANDY GTFO

Denver would be a nice spot for a kickoff classic involving the PAC/MWC/BYU and Big XII/B1G West/American West.

Or Las Vegas if they ever get that new stadium built.