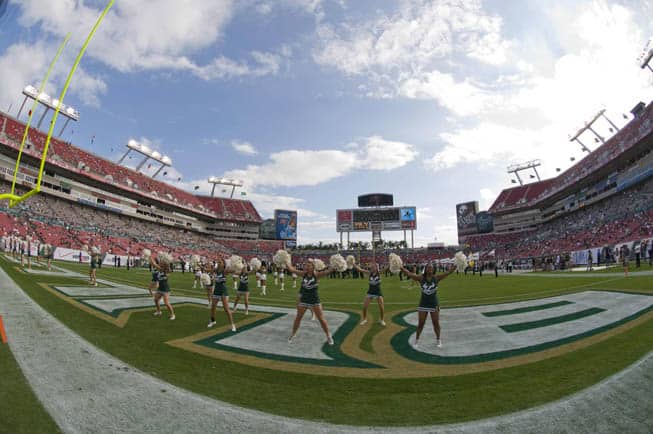 The Illinois Fighting Illini and the USF Bulls have scheduled a home-and-home football series for 2017 and 2018, USF athletics director Doug Woolard announced today.

In the first game of the series, Illinois will travel to face USF at Raymond James Stadium in Tampa on Sept. 9, 2017. The Fighting Illini will then host the final game at Memorial Stadium in Champaign on Sept. 15, 2018.

Illinois and USF have never met on the football field.

USF is the second non-conference opponent scheduled for Illinois in 2017, joining a recently announced home game vs. Western Kentucky.

For the 2018 season, the Bulls are the first announced non-conference opponent for the Fighting Illini.

The Bulls now have three non-conference games scheduled for both the 2017 and 2018 seasons. The Bulls also host Stony Brook and Wisconsin in 2017 and Elon and Michigan State in 2018.

After losing big to FCS McNeese State on Sat, will USF even have a football team in 2017.

calm down the program is in good hands the coach doesn’t even have his players that he wants on the team just yet, first thing we need is a quarterback I blame the quarterback for that loss, had he made the switch earlier in the game we would have won that game when the quarterback kept throwing interceptions and not completed passes everyone gave up even the defense and I don’t blame them

South Florida is a tough opponent, but Illinois have a better basketball team.

What are odds that College Game Day will be there?

About 100 times greater than them showing up in Moscow, Idaho that weekend.

In other words pretty slim,