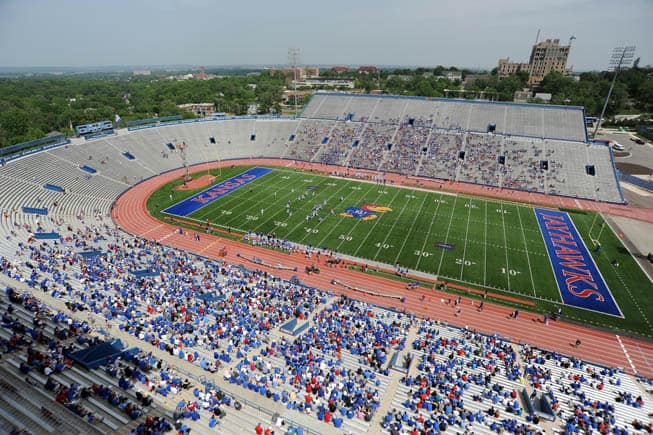 The Illinois Fighting Illini and the Kansas Jayhawks have scheduled a home-and-home football series for 2023 and 2024, both schools announced today.

“This series with Kansas is another great addition that fits in with our scheduling philosophy,” Illinois Director of Athletics Mike Thomas said. “We have set out to schedule games against some outstanding institutions and I feel like we’ve done that with home-and-home series finalized for North Carolina, South Florida, Virginia and now Kansas.”

Illinois and Kansas last met in Champaign in 1968. The Jayhawks won that game 47-7, but the Illini lead the overall series 3-2.

“I am really pleased to add Illinois to our schedule,” said Kansas football head coach Charlie Weis. “This series gives us another opportunity to play a game in an important area to our recruiting efforts. Additionally, it’s a chance to accommodate our large alumni base in the Chicago area.”

Both games are the first announced non-conference contests for Illinois and Kansas for the 2023 and 2024 seasons.

News of a potential series between the two schools first surfaced in October when the Big Ten accidentally posted a future non-conference schedule document online. The document listed the series as Sept. 7, 2019 at Kansas and Sept. 19, 2020 at Illinois. Obviously, those dates were changed to 2023 and 2024.

Nice photo of the crowd at that game……..Appy. St gets more folks for their equipment distribution day in August……

Looks like a pic from a spring game. Notice how thin each sideline is and the lack of a band.

It was from their 2013 Spring Game

These two teams are so bad that the loser of the game should get a one suspension of play. let’s hope that another 56 years passes before they play each other again.

Sorry, I meant that to be a one year suspension of play (a mini death penalty). I was so excited at the prospect of this 2 game series that I was careless in my typing. Just think, the starting quarterbacks in this game are in the second to the fifth grade.

A lot can change in ten years, both these teams were in BCS games in 2008. Thanks for your opinion guy.

They deserve each other. Winner will be who can draw fewer fans to their home stadium.

Kasey seems a little upset. Relax, Kasey. The odds are that one of them may be back in a bowl game in 15-20 years.

I really don’t understand the hater parade here. Things go up and down quickly in college football.

Dave: Illinois had gone two years without a bowl win, they will be back shortly.

If this match up was next year it would be an awful game, but in ten years it could certainly be an exciting series.