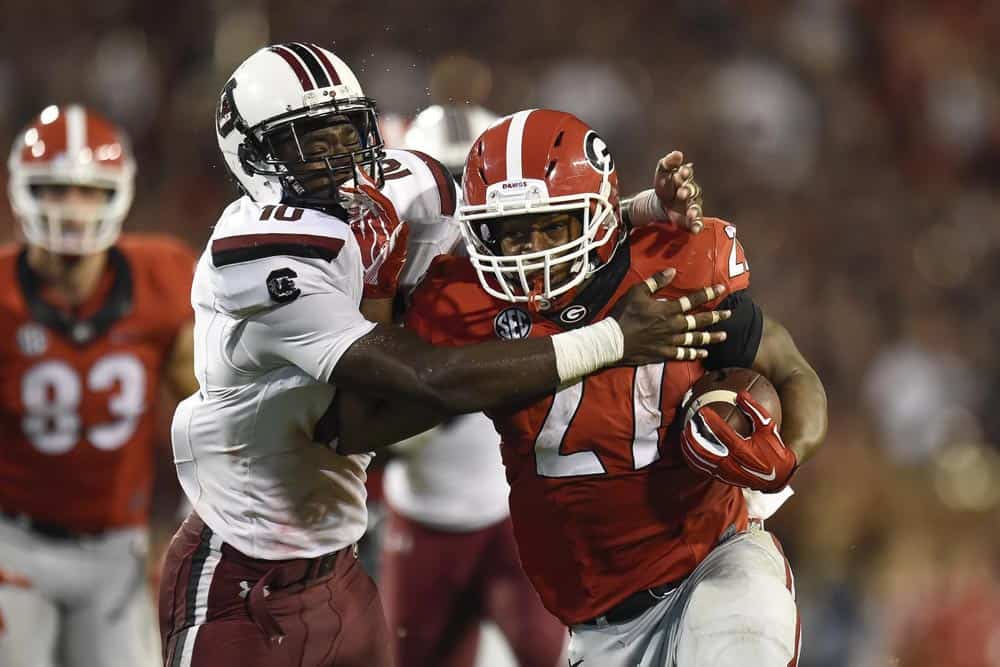 College football plans could be altered this weekend as Hurricane Matthew, a category five storm, is expected to make landfall in numerous locations along the Atlantic coast throughout the weekend.

The Southeastern Conference also issued a statement on the numerous concerns regarding Hurricane Matthew, as multiple games within the conference could be affected.

“The SEC communicates regularly with schools on significant weather issues and will remain in contact with the schools involved in both football games that have the potential to be impacted by Hurricane Matthew this weekend,” the conference said in their release.

Georgia is slated to play SEC East rival South Carolina on Saturday at 7:30pm ET in Columbia, S.C., but a potential change of time or venue could be possible.

The hurricane is expected to make landfall on the South Carolina coast at 8am Thursday, and could have an impact as far inland as Columbia come kickoff time.

South Carolina has had to make a change in venue fairly recently as the floods ravaged the Palmetto State. The Gamecocks were slated to play LSU at Williams-Brice Stadium in 2015, but conditions led LSU to open their doors and for the game to be played in Baton Rouge, La.

Saturday’s forecast for Columbia now includes rain, a 40 percent chance of precipitation, in addition to wind gusts and a high of 79 degrees. By those projections, it seems as if it may not be too much of a hassle to play on-time and at Williams-Brice Stadium. However, South Carolina governor Nikki Haley disagrees.

Haley said during a Tuesday news conference that she “can’t imagine” the game being played in Columbia on Saturday, according to Matt Connolly of The State.

Prior to Haley’s comment, the University of South Carolina issued a statement on the situation.

“The University of South Carolina and the athletics department are currently monitoring the movements of Hurricane Matthew,” the school’s statement said. “We are in communication with the National Weather Service, local authorities and the SEC regarding potential weather issues. The safety of everyone that could be impacted by this storm is paramount. Once forecasts call for action, we will use all means necessary to inform the public.”

The school announced that they have canceled the equestrian and volleyball matches against Georgia on Friday. They will make a decision later in the week, after convening with state, local and university officials.

Georgia head coach Kirby Smart stated in Tuesday’s press conference that there are multiple scenarios in play, according to Jason Butt of The Telegraph and macon.com.

Haley’s comments could be precautionary as the state would seem to take every measure to let the people know they’re protected, due to fifteen deaths from the flooding just a year ago.

However, if the game time or venue were to be altered, the possibilities of playing in Athens, in Atlanta at the Georgia Dome or moving kickoff to Thursday, Friday or Sunday would seem to be in play at this time.

Georgia State, who plays their home games at the Georgia Dome, could move their slated kickoff to noon, in order for both teams and fan bases to make a move into the facility on Saturday.

Florida’s game doesn’t seem to be as much of a concern as South Carolina’s as the storm is projected to have passed by their noon kickoff on Saturday. However, there is the potential of a time or venue change due to the ramifications of the storm.

The University of Florida issued a statement on Tuesday about the concern surrounding the storm.

“There has been no change as it relates to Saturday’s football game,” said Chip Howard, the executive associate Athletic Director of Internal Affairs. “We continue to monitor the progress of Hurricane Matthew and it’s potential impact on campus. We are working closely with local, state and university officials as well as the SEC office.”

In addition to the two games within the SEC, the following games could also see schedule changes: UCF (vs. Tulane on Friday, Oct. 7), Florida Atlantic (vs. Charlotte),  Miami FL (vs. Florida State), and USF (vs. East Carolina).

For the latest information on game changes and postponements, please click here.

On an unrelated note…
http://www.espn.com/college-football/story/_/id/17722766/acc-elects-keep-current-football-schedule-format