How playing at Army nearly cost Dwight Eisenhower his career and a brief history of U.S. Presidents and college football 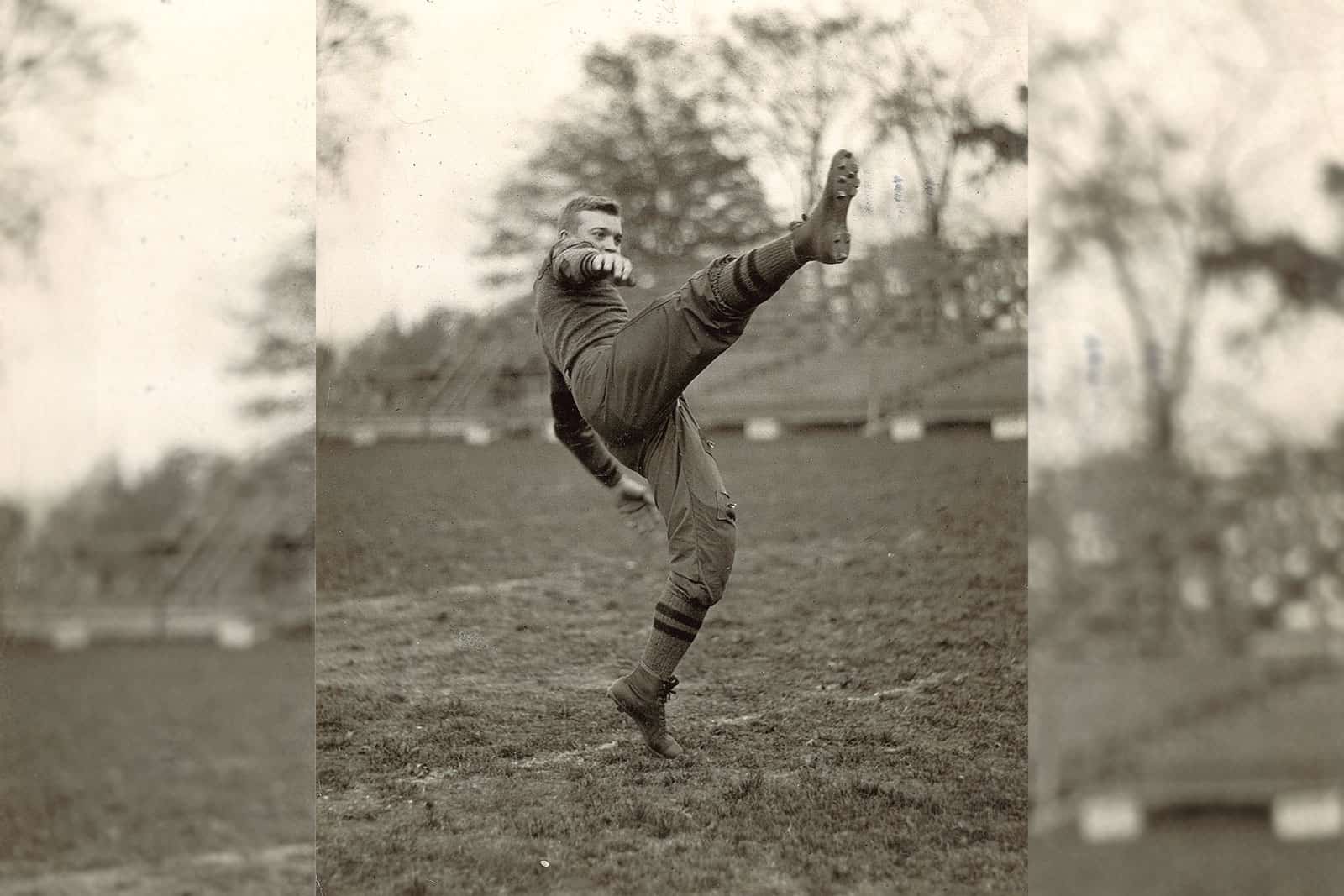 Though the Heisman Trophy presentation is scheduled for Saturday night, the only on-field action in college football this weekend is Army vs. Navy at 3pm EST on CBS.

Woven into the fabric of the rivalry, and the unique nature of the programs who participate in it, are storylines that are so rich that they seem almost impossible.

Dwight D. Eisenhower, the 34th president of the United States, played college football at Army for two seasons (1911-12) before breaking his leg in a game against Tufts College (located in Massachusetts, now a DIII program). Not only did it end the on-field career of an athlete considered to be one of the “most promising halfbacks in the East”, it, and a subsequent injury “nearly cost him his West Point commission.”

If not for the support of the president of West Point’s medical board, the panel who had voted to discharge him from the academy, Eisenhower wouldn’t have gone on to graduate in 1915. Though he may well have been highly successful without finishing his studies at Army, it’s logical to assume that his career progression might have been very different.

Did Army’s 15-6 win over Tufts in 1912 nearly cost the school its claim to a second president (Ulysses S. Grant graduated from West Point in 1843)?

While his story may be the most historically impactful, Eisenhower isn’t the only U.S. President with a direct connection to college football.

Without Theodore’s Roosevelt football intervention, there well may have never been an AP Poll, a BCS, a CFB Playoff nor a 119th annual Army-Navy game.

By the early 1900s, football had become not just brutal, it was deadly. History.com cites a report that 18 football deaths, along with 159 “serious injuries” occurred in 1904 alone. This led to an obvious push to abolish the sport.

Enter in Roosevelt, then in the fifth year of his presidency:

Using his “big stick,” the First Fan summoned the head coaches and representatives of the premier collegiate powers—Harvard, Yale and Princeton—to the White House on October 9, 1905. Roosevelt urged them to curb excessive violence and set an example of fair play for the rest of the country. The schools released a statement condemning brutality and pledging to keep the game clean.

Though it took a couple of more seasons to right the ship, including another White House meeting hosted by Roosevelt in 1906, eventually the rules were amended to promote safety and lay the foundation, and ensure the very survival, of the game we love so passionately in 2018.

According to a historical account published in The Crimson, Woodrow Wilson was elected a “football director” and “participated in the coaching of that original Rugby team of Tigers” when Princeton first played football vs. Harvard in Cambridge in April of 1877.

Wilson graduated from Princeton in 1879 and served as his alma mater’s president from 1902-10.

As per The Stanford Daily, Herbert Hoover was the guy who booked the venue and printed the tickets for the first-ever “Big Game” between Stanford and Cal in 1892.

In 1894, he managed the school’s athletic finances and traveled with the football team all season to ensure its financial solvency and, therefore, its survival. Both the 1892 and 1894 teams were coached by Walter Camp.

Despite the physical incapacities he faced later in life, Franklin D. Roosevelt went out for football as a freshman at Harvard in 1904. According the FDR Foundation,

With 150 others Frank tried out for freshman football, but was cut and assigned to the Missing Links, lightest of eight intramural “scrub” teams. His teammates elected him captain. “It is the only [team] composed wholly of Freshmen,” he wrote to his parents, “and I am the only Freshman Captain.”

According to a piece on Boston.com, JFK was a 6-foot-1, 163-pound end for the non-varsity Crimson. In a rare review of a president’s football acumen at the time he actually played, here is his coaches’ very-brief assessment at the close of the 1936 season.

The most adept pass catcher was John Kennedy, but his lack of weight was a drawback.

Though, according to The New York Times, Richard Nixon never got further than the third-string as a guard for Whittier, he did retroactively earn his letter in football once he became president. He also “admired his head coach, Wallace Newman, more than ‘any man I have ever known aside from my father.’

The most accomplished president to play on the college gridiron, Gerald Ford played center for Michigan’s back-to-back national championship teams in 1932 and 1933. The Wolverines compiled a 15-0-1 record over the two seasons and outscored their opponents 254 to 31. The 1934 team plummeted to a 1-7 mark, tying it for the second-worst season in program history. Despite this, Ford was named the team’s MVP that year.

Though he received contractual offers to play pro ball for the Detroit Lions and Green Bay Packers, Ford opted out and instead continued his education at Yale Law School.

While he didn’t play for Navy’s top team, Jimmy Carter did participate in the programs’ “sprint” squad. Designed for players weighing under 173 pounds, according to Sports Illustrated (which also lists Robert Kraft as a former participant with Columbia), “it’s football for guys who wear mediums instead of XXL’s.”

Though perhaps better known for his depiction of George “The Gipper” Gipp in the 1940 film Knute Rockne: All American, Ronald Reagan did more than just act like he played football. Reagan was a starting guard at Eureka (Illinois, now a DIII program). Unlike JFK, Reagan’s college coach, Ralph “Mac” McKinzie, had lots to say about Reagan the football player in a 1985 article in the Chicago Tribune.

Only average in ability, but a team player who played unselfishly, who cheered on his teammates, who played to win, and who had a real flair for dramatics and showmanship. Even then, he was a leader and he was well-liked by his teammates and his classmates

…Slow afoot, only average in size, and lacking in many techniques. But he had about him a good attitude, he believed in conditioning and hard work, he understood self-sacrifice and self-development, he was a team man, and he cooperated well.

Reagan, who also broadcast University of Iowa games for a Davenport radio station, was inducted into the Eureka College Athletics Hall of Fame in 1982.

This is interesting and awesome!

This is a great article. I love the history of college football, and it is interesting to see how many presidents had a role in the greatest collegiate sport.