How many seats were left empty during the 2018-19 bowl season? 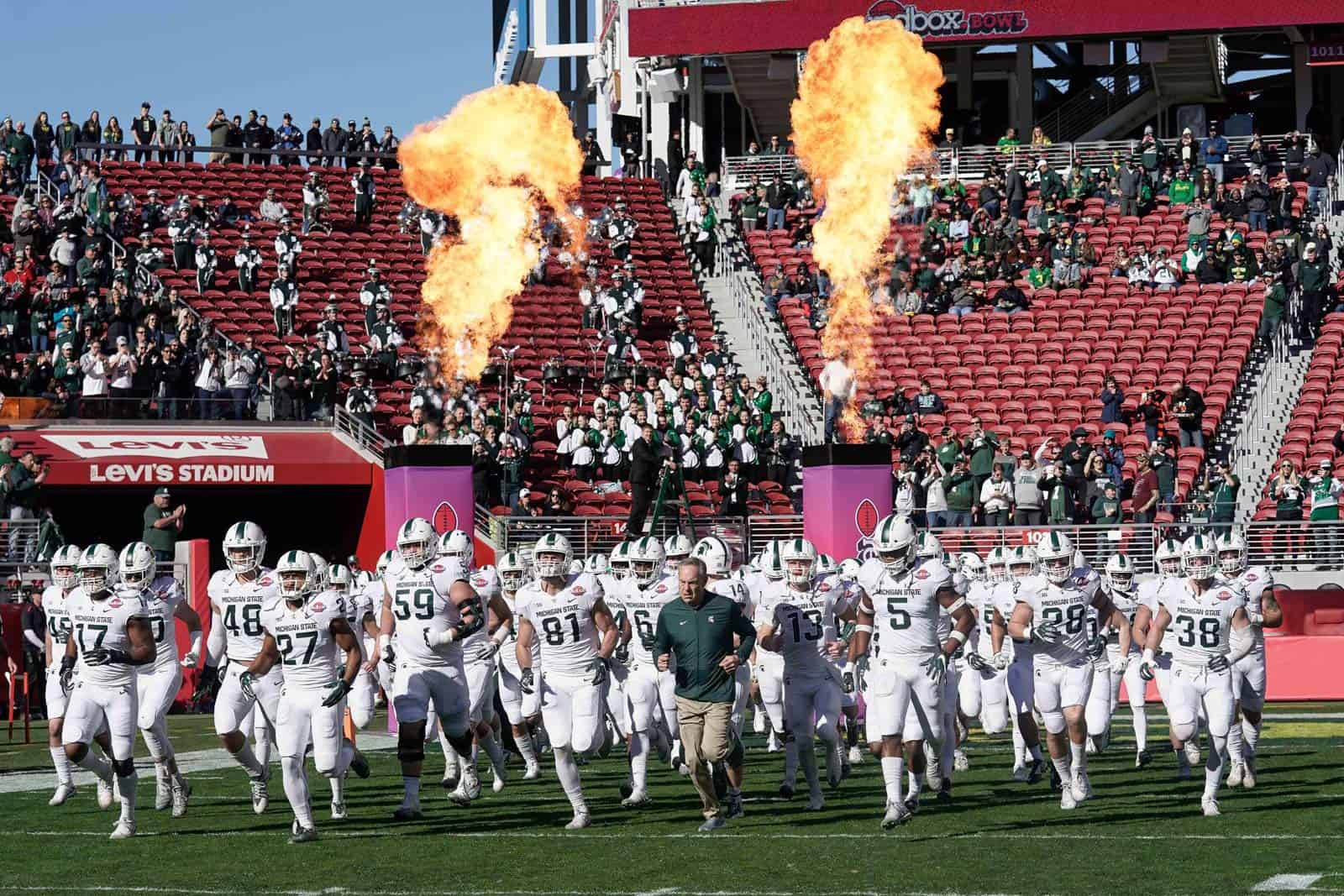 If you watched any part of this season’s generous offering of bowl games, if nothing else, you saw row-upon-row of empty seats.

While most reports compare the average annual bowl attendance with last season’s figures – how many seats were left unused?

If you total up the entire number of seats available (the capacity for each venue) and subtract the official attendance for each of the 39 games (remember the SERVPRO First Responder Bowl was cancelled due to weather), there were nearly 700,000 empty seats this bowl season.

Only five bowls had fewer than 1,000 seats empty, a number that includes the only two bowls that sold out their games.

The non-ranked vs. non-ranked matchup with the fewest-empty seats was the Military Bowl – Cincinnati vs. Virginia Tech on Monday, Dec. 31 at Noon EST. An impressive 32,823 flocked to reasonably-sized, 34,000 seat Navy-Marine Corps Memorial Stadium in Annapolis, Md. Only 1,177 seats went unused.

The award for bowl with the fewest empty seats featuring two non-Power 5 members goes to the Bahamas Bowl. Again, this had to do with Thomas Robinson Stadium’s capacity of 15,023 – making it easier to entice 13,510 to watch FIU and Toledo go at it (Fri., Dec. 21 at 12:30pm EST). Only 1,513 chairs were left vacant.

Though it’s a valid argument that the number of bowl games is the problem – 40 games featuring 80 teams or 62% of the total FBS field – it’s also venue selection that leads to empty seats.

Think about it this way – let’s come up with 37 meaningless postseason games that most people don’t care about and then let’s book more than half of them into stadiums that hold 60,000-plus people.

Though a lower capacity naturally results in a lower number of potential empty seats, it’s still noteworthy that the 16 bowl games this season played in venues with fewer than 60,000 seats accounted for only 183,619 of the empty seats. That’s only 26% of the grand total.

To put another spin on it – the average fill rate for the 20 bowls with venues of 60,000 plus was 61%. This includes the Rose, Peach, and Sugar Bowls which all filled more than 95% of their seats. These “bigger” games also included 24 of the 25 teams ranked in the final CFP rankings.

Seeing row-after-row of empty seats on television, much less in person, adds to the growing impression that all but the CFB Playoff games (and the New Year’s Six bowls) are less true reward and more pure entertainment. It also explains why a growing number of pro-caliber athletes opt out of participating.

All we can hope for is that wiser heads will prevail and what’s good for the great game of college football will no longer be sacrificed in the name of television revenues (all but five of this year’s bowl games were offered on an ESPN network or ABC).

you might say that the First Responder Bowl had a a poor response.

Why are fewer bowl games “good” for college football?

The bowl games (even empty ones) still make economic sense because people watch on TV. The vast majority of players want to go. Schools also elect to go (they could turn down bowl invites if they wanted to).

So who is harmed from the plethora of bowl games and what benefit comes from cutting the number of the bowl games?

Note that “it offends my sensibilities” is not a strong argument.

Jason, if the ratings were so terrible that ESPN thinks it could do better showing something else on TV, ESPN would kill off a bunch of these bowls. That they haven’t yet means that these bowls still make economic sense (because the eyeballs they draw for their cost is better than any other alternative for ESPN).
Again, “because I think they’re stupid” isn’t a compelling argument vs. economic sense. And I doubt you know the economics of bowl viewership better than ESPN does.

Richard has a good point. It is really only the fans that have built up this notion that bowl games need to equal “big” college football games. If you look at the typical regular season college football game, most home stadiums have empty seats. It is only a handful of the powerhouse schools, such as Alabama, Nebraska, and Ohio State, that skew the data towards sellouts. Even big football schools like Tennessee and Penn State struggle to fill their stadiums for their cupcake games. But especially looking at lower tier P5 schools like Kansas and Minnesota, they often have only 50% attendance or less unless the opposing fans travel well. If you can’t expect the Gophers to fill their home stadium, how do you expect them to fill an NFL stadium in Detroit? As long as there is still TV revenue, it really doesn’t matter how many people actually go to the bowl games or how many there are. I actually had a much bigger problem with so many of the bowl games this year being played during week day work hours. Even bigger bowls like the Sun Bowl I couldn’t watch because I was at work. To me, that is a much more sound reason to decrease the number of bowls. Right now, anyone that loves college football and works a 9-5 is unable to watch all of the games live without taking off half of December!

Don’t really know where you’re getting Penn State struggling with attendance. Their only game in the last two years with attendance under 100,000 was the Maryland game at the end of the season. It was played in an ice storm and there were car crashes all around State College.

Thanks for your support, David.

I have not watched a live sporting event in 5 years. Try a DVR. The games are now 3 to 4 hours long
and I can watch the whole thing in an hour without missing a play. No commercials, and no reviews that take 5 minutes to wait for.

It should be noted that the bowl with the most empty seats featured a school playing in their home stadium. Also, the Lions messed-up a good thing with the Motor City / Little Caesars Pizza Bowl when it was the MAC vs B1G, as it was right in the footprint. CMU vs Purdue drew over 60k

Bowl games should be a reward for a winning season, not a mediocre one. They need to axe some of these games. Make it so that you have to win EIGHT games to qualify automatically and maybe sneak in at seven. I’d even go as high as nine wins to make it more of a reward. But, anyway you slice it, if you’re not in the championship running, your bowl game isn’t much more than a consolation game. Even if D1A went to a true playoff system, like every other division within the sport, the bowls are nothing more than a consolation game.

I quit watching football after Army-Navy unless my collegiate alma mater, Eastern Michigan, plays a bowl game since it’s been few and far between. But even then, they won seven games twice the past three seasons.

Ah, these types of discussions are fun as most people’s arguments tend to be “this is the way I think it ought to be”/”it offends my sensibilities”.

What I find odd is that I never hear people say we should kill off the NIT or make the argument that postseason play in NCAA basketball should be a reward for a good/great season (instead of a mediocre one). Why is that?

“Logic” and alma mater check out.

The non-P5 bowl with the fewest number of empty seats was the Armed Forces Bowl between Army and Houston, not the Bahamas Bowl.

I hope they add even more games. my family has so much fun in our pool each year. It’s great bonding time. I can’t get enough of them. Don’t like it? Don’t watch it.

College football has a few problems it needs to address.

1. There is an attendance problem in college football with fewer people coming to games
2. College football games are too easily accessible for people to watch on TV and other platforms
3. Going to bowl games is a formality for most power 5 programs and many fans don’t get very excited about going to a bowl game if their team was supposed to win 10 games and only ends up winning 7, especially if that team was in a bowl the 5 years before. Many fans would get bowl fatigue.

To me there are some solutions to these problems

1. Have an NFL like rule about sell-outs for home games being aired on TV. This would presumably inspire more fans to go to games if it isn’t guaranteed to be on TV. Make streaming the game a paid service for about the cost of a ticket.
2. Take the SEC for example when the CBS game is on at 3:30pm est, if the game isn’t a sell out then the home market gets an SEC network game on the CBS airwaves. Same with games on ESPN, if that game isn’t a sell out then the home market gets an SEC network game.
3. 10-20 bowl games need to be eliminated. Having less bowl games would make actually going to a bowl game more special and more fans wanting to go to those games. I have said more than once on this messageboard that cities with more than one bowl game such as Orlando should consolidate those games. These other bowl games could become neutral site regular season games. I’m pretty certain that if the Cure Bowl was held in October and featured either a conference or non-conference game between American, ACC, or SEC teams, it would draw more fans than the Cure Bowl does now. Also could eliminate bowl games in cold weather cities like New York, DC, Detroit, and Boise.

I believe these suggestions would improve college football’s problems with attendance.

TV brings in as much or more money than ticket sales for big time college football conferences these days.

Most the games with the empty seats are the “2nd” bowl game a venue, like Levi’s Stadium or the Super Dome, so while 19,000 tickets is 3/4 empty in the Super Dome, it is almost full in next years Myrtle Beach Bowl or a Bowl in Boise Idaho. I am happy to delete or move a lot of those 2nd Bowl games.

The other problem is that the bowl tie ins create some pretty bad matchups at the bottom end of the schedule. Again deleting the bottom 10 games or so would help.

Last note ESPN has a subsidiary company that manages a lot of the mid and lower tier bowls so we are even really hurting a non profit organization that run most of the established bowls.

Most of these bowls should be called Consolation games instead of bowl games. It’s to the point that they should just give every team a game for more practice for the flowing season. Half of these games are played for TV air time only. Play these consolation games at he home team of one of the schools. Match up like records like 0-12 vs 1-11 . Rutgers vs UConn, Kansas vs Arkansas. Just don’t call all of these bowl games. then ESPN can pick out whichever ones they want to televise. It’s all about them just filling air time any way.