How many national championships would Notre Dame have won as full ACC members? 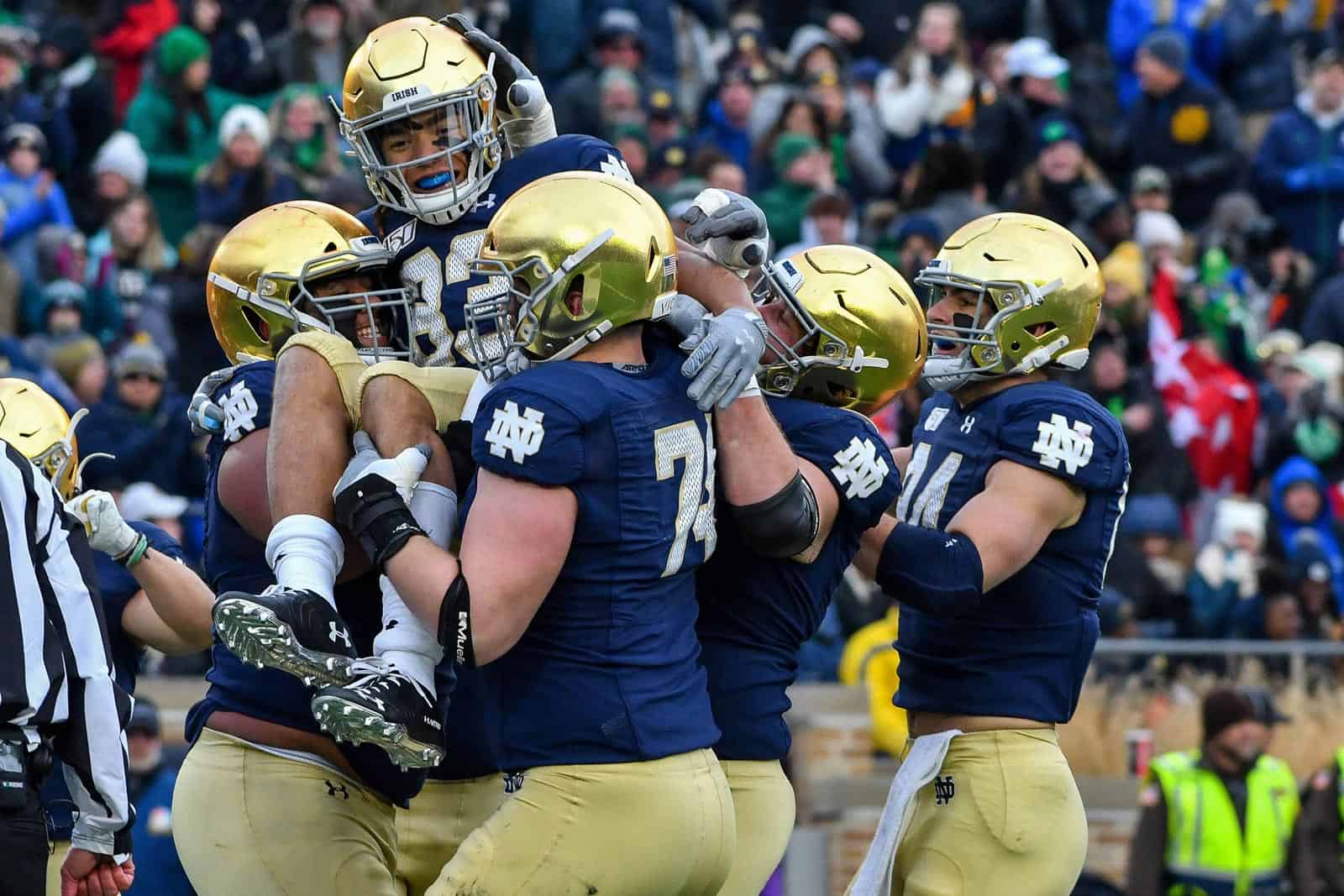 Let’s pretend that it’s 2012 and instead of retaining its independence, Notre Dame football follows the other Irish athletic programs and leaves the Big East for full membership in the ACC.

Rather than inking a deal to play five ACC opponents each season, let’s imagine that Notre Dame – instead of Louisville – joins the ACC-Atlantic division in 2014.

In this scenario, the Irish would have to play the standard eight-game ACC slate and then would have four non-ACC opponents to schedule. This would allow them to retain their annual rivalry clashes with USC, Navy, and Stanford and would also make it possible to add a Michigan, Michigan State or other historical foe. Beyond preserving these longstanding series, such opponents would boost the strength of the new schedule, thereby softening the perception of playing a “weaker” ACC slate.

Within the conference, Notre Dame would play the other five members of the ACC-Atlantic and then two opponents from the Coastal – a rotating member plus Virginia. The Cavaliers are Louisville’s permanent cross-division rivals, so we’ll use them as the Irish’s for this example.

Here’s a look at the schedule Notre Dame played in 2019 vs. what it might have looked like as full ACC members.

The Hurricanes appear on the imaginary slate as the rotating opponent from the Coastal because that’s who Louisville drew in cross division play last season. The fourth non-ACC opponent went to Michigan as opposed to Georgia because of the history the two programs share.

If you’re thinking that replacing games with New Mexico and Bowling Green with Syracuse and Wake Forest aren’t an apples-to-apples exchange, you’re right. That said, these are all winnable games. The Irish are 4-0 against the Demon Deacons and 6-3 against the Orange (who they haven’t lost to since 2008). The bigger question might be, “Is it worth it to upgrade two opponents from ‘for sure win’ to ‘very probable win’ to clear the overall path to the CFP bracket?”

The argument would become even easier to digest by dropping a Michigan/Georgia tier opponent and reintroducing a New Mexico/Bowling Green level foe into the mix. This is plausible – and perhaps necessary – as it’s extremely rare for a Power 5 member to play more than two Power opponents in non-conference play. In 2019, only one Power program – Boston College – had three such foes scheduled (Kansas, Rutgers and Notre Dame).

Given that Michigan and Georgia were the only losses Notre Dame suffered in 2019, it’s logical (but admittedly over-simplified) to assert that the Irish, by following the above blueprint (including dropping the Wolverines for a Group of 5 opponent), would have had a better chance of running the tables as ACC members last season than it did as independents. The biggest hurdle, and most exciting opportunity for viewers, would have been Notre Dame grappling with top-ranked Clemson.

The other benefit of a full ACC membership, and something independence will never afford the Irish, is the boost of a conference title game, or a 13th win against a quality opponent. This would allow Notre Dame to compete – without any need for a “special pass” from the CFP committee – with the SEC, Big Ten, Big 12 and Pac-12 in schedule strength debates. In 2019, a 12-0 Irish team would have just had a second game vs. Virginia – the Coastal champion – standing between it and a playoff appearance.

Add in that the Irish are as attractive nationally (i.e. the most popular girl in junior high school) as Ohio State, Alabama and Oklahoma and it’s very easy to see them – even as one-loss ACC champions – being selected by the committee over a Washington, Michigan State, TCU or even Auburn.

While it’s impossible to definitively claim that “Notre Dame would win the national championship if it was an ACC member” it’s an intriguing discussion.

Think about it this way – how close could a quality Notre Dame team get if all they had to do was beat Clemson, USC, Stanford, Florida State, Navy, Virginia, the balance of the ACC-Atlantic and a rotating opponent from the Coastal?

Taking it a step further, what if the Irish dropped Stanford and USC as annual opponents and began mirroring the scheduling practices already in place in the ACC? What if they actually played Louisville’s schedule year in and year out?

How many championships would they have won then?

The other compelling angle of the conversation is the effect Notre Dame’s imaginary ACC membership would have had – and would still have – on Clemson’s skyrocketing trajectory.

The Tigers simply don’t play the same number of Top Ten ranked teams in the regular season than an Alabama, Oklahoma or even Ohio State. This makes the potential add of an annual game with the Irish an additional tall hurdle that they currently enjoy not having to contend with.

Clemson hasn’t played a Top Ten opponent in the regular season since Oct. 1, 2016 when it outlasted (3) Louisville 42-36 at home. That was three and a half seasons ago! As good as the Tigers really are, and as much as they’ve showed up in the postseason vs. the best of the best, they’ve got an easier, clearer path to the place where they hand out the trophies.

Consider LSU, which has played ten Top Ten regular-season opponents since Oct. 1, 2016. It amounts to ten times as many incredibly difficult tests to earn the opportunity to compete for a title.

Circling back, the comparison also adds credibility to the argument that Notre Dame might have a better shot at a national title as ACC members. The Irish have grappled with three Top Ten foes during the regular season since Oct. 1, 2016. While those aren’t SEC numbers – it still triples what the top member of the ACC-Atlantic played during the same time frame.

What if Notre Dame’s insistence to preserve its historical football independence isn’t – as some perceive it to be – an advantage in the CFP era of major college football? Indeed, what if, instead, remaining conference-free is a roadblock to the Irish winning national championships?

Provocative question, Amy …. and I don’t know the answer.

I do, however, think the schedule you have outlined is unrealistic if ND were a full conference member.

First, would five of the eight ACC games, as you have outlined, really be on the hallowed sod of Rock’s House?

Third, if the annual Michigan series fell victim to ND’s obligation to play five ACC opponents per year (which it did), then I think it would be difficult to see Michigan as a third P5 opponent after USC and Stanford.

Fourth, playing five ACC home games in 2019 implies three ACC home games in some future season, which means all four non-conference games would be at home presuming ND which wouldn’t be compatible with preserving each of the USC, Stanford and Navy home-and-home series.

Fifth, there will be at least one “buy game” on the schedule each season, as ND will presumably be trying to play seven home games annually.

ND may have to give up Independence some day, but ND’s status as a national university, the scheduling flexibility and the attractive self-reliant revenue model all currently argue for staying the course.

If this were to happen, I see them not only not scheduling a Big Ten rivalry as the 4th non-conference game, but probably dropping Stanford as an annual opponent as well. Also there would be some reshuffling of division members, likely a switch with VTech so that UVA and VTech would become crossover opponents while ND and BC become crossover opponents. This would allow ND to play annually BC plus in division GTech, Pitt, and Miami, arguably their four most important ACC rivalries. Ending the season with Miami would also be likely. 4th OOC game would be a cakewalk while third might rotate bw Stanford, Purdue, Mich St, Mich, and some other P5 programs.

I basically agree that if Notre Dame did join the ACC, it would have probably kept Navy and one Power 5 team as a non conference game each year and rotated the other games with one or two NFL stadium sites per year. That is a good enough schedule for the committee.

If they had started that series right as Clemson became the best team in the ACC and Florida St was coming off a National Championship would Notre Dame have been put in the Atlantic with them, or in the Coastal?

Who would be the better program if Clemson, Notre Dame and Florida St were all in the ACC Atlantic? We will never know for sure.

One thing that needs to change about ND football’s relationship with the ACC is how ND can qualify for the Orange Bowl.

In years where the Orange Bowl is not a semifinal, and the ACC champion is in the playoff, ND should be the ACC rep IF they are ranked above all other ACC teams (outside the champion) in the final CFP ranking AND did not already qualify through the berth that could also go to the Big Ten or SEC. If another ACC team is ranked above ND, and ND is the highest-ranked out of all possible opponents for the ACC representative, then ND can still qualify for the Orange Bowl that way.

This needs to be implemented in the wake of last season in which Clemson was the only truly good ACC team, but did not go to the Orange Bowl as they qualified for the playoff. ND was ranked 15th in the final CFP Poll, higher than any other non-champion ACC team, but because they weren’t technically in ACC football, 24th ranked Virginia got the Orange Bowl bid. I was bitter about this because ND had beaten Virginia earlier in the season, and even more so when Ohio State, a team who played a much tougher schedule than Clemson, lost to them in the playoff. It’s even worse considering that not only ND lost to Clemson in the playoff the year before, but Clemson’s QB idolizes Peyton Manning, a man I deem a coward for not joining the Browns in 2012.

It would be all too perfect if the football gods decide to punish UVA for taking the Orange Bowl bid that should have gone to ND by making them become the first ACC team to lose to UConn, a school rejected by the ACC on several occasions, in ages next season.

And as far as roadblocks to national titles go, the real biggest roadblock to ND winning one is their insistence on keeping Brian Kelly as their coach. They need to realize that their potential under Kelly has been maxed out, and replace him with Urban Meyer when it is next convenient.

As it stands, ND’s national title drought of 31 years is the longest current drought among the collective P5 conference memberships if ND is counted as its own conference. The next-longest drought, that of the Pac-12, is only 15 seasons long.

ND has not won a major bowl since the Cotton Bowl to end the 1993 season. I attribute all of this to the “Rudy Curse”. The Irish have not performed as well since that movie came out. As much as I love ND, Rudy should never have been made. ND might have won like 5 more national titles in the last quarter century if the movie didn’t exist.

As it stands, Urban is ND’s best shot at completely obliterating the Rudy Curse.