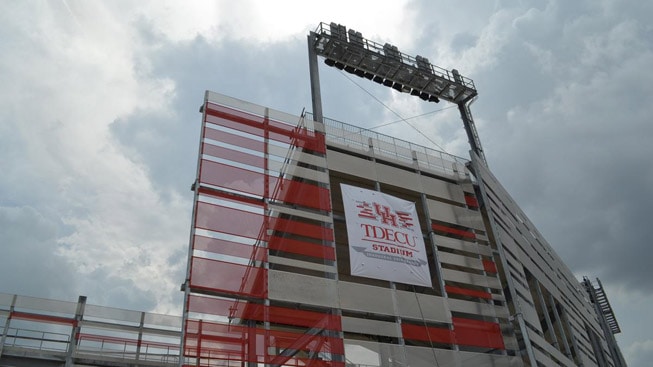 UH will host Vandy at TDECU Stadium in 2015. (Photo-Josh Cain/HBJ)

The Houston Cougars and the Vanderbilt Commodores have scheduled a home-and-home football series for 2015 and 2021, both schools have announced.

Houston will host the first game of the series at the brand new TDECU Stadium on Oct. 10, 2015. In the second and final game, the Cougars will travel to face the Commodores at Vanderbilt Stadium in Nashville on Oct. 2, 2021.

“The addition of Vanderbilt allows us to reach our non-conference scheduling goal of two opponents from major conferences in 2015 with the SEC and ACC with Louisville, along with a minimum of six-to-seven home games in a season,” said Houston Vice President of Intercollegiate Athletics Mack Rhoades. “We will continue to remain aggressive in our non-conference scheduling and look to bring strong opponents to the City of Houston.”

Houston and Vanderbilt first met earlier this year in the 2014 BBVA Compass Bowl in Birmingham. The Commodores beat the Cougars in that contest 41-24.

“We are pleased to join the University of Houston in making this scheduling announcement,” Vanderbilt Director of Athletics David Williams II said. “We know from the excitement of the BBVA Compass Bowl that this should be a very competitive series. It will allows the Commodores to play on the road in front of one of Vanderbilt’s largest alumni bases. The team experienced tremendous alumni support on our last visit to Houston (at Rice in 2009).”

Vanderbilt will officially release their 2015 non-conference schedule later this year. The Commodores are tentatively scheduled to open the season at Middle Tennessee (Sept. 5), host Western Kentucky (Sept. 12), and host Austin Peay on a date to be announced.

That year the AAC splits into divisions, so it will be interesting to see how Houston handles there non-conference games against Vanderbilt and Louisville. They’re going to have to win one of them if not it just might be a real rough season for Houston in 2015 but before we jump the gun lets see what happens this season.

Good to see that Houston was able to schedule a team from the SCC for their final OOC game for 2015.