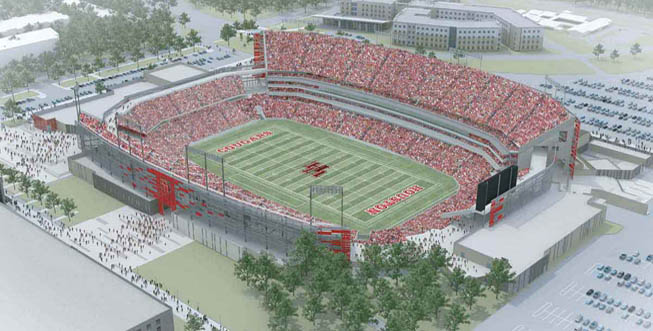 Houston and UNLV will meet at Houston Football Stadium.

The Houston Cougars and the UNLV Rebels have added a game against each other to their 2014 football schedule.

The move helps Houston’s strength of schedule because they had two FCS opponents on the slate. The Cougars are also scheduled to host Grambling State on Sept. 6.

“We are grateful this opportunity presents itself now as it was not available two months ago when we originally announced our schedule. Adding a third FBS opponent was a priority for our program as it relates to the strength of schedule component of the new College Football Playoff,” said Houston Vice President for Intercollegiate Athletics Mack Rhoades. “We’d like to thank Tennessee Tech Director of Athletics Mark Wilson and UNLV Director of Athletics Tina Kunzer-Murphy for their help in completing this late rearrangement.”

UNLV was able to add the Houston game to their schedule due to the Hawaii Exemption. That rules states that any team that plays at Hawaii during the regular-season may schedule an additional game to help offset travel costs. UNLV visits Hawaii on Nov. 22, 2014.

“We saw nothing but positives in adding a trip to Houston to the schedule,” said UNLV Director of Athletics Tina Kunzer-Murphy. “Taking the team to play in a high-profile city and their brand-new stadium, while also helping our budget, is something that was certainly appealing. We are also excited to travel to an area of the country where a good number of our players call home. I want to thank University of Houston athletics director Mack Rhoades and his staff for their work in making this happen and we are looking forward to a great game.”

It seems like a win-win for both schools. Plus, UH doesn’t have to pay out TnTech since it’s just a reschedule.

How can this be Houston can’t play thirteen games. Or did they cancel one of there games against a FCS opponent?

They moved the Tennessee Tech game to 2015.

2nd paragraph states the TTU game was moved to 2015.

That will not happen.

There is absolutely no reason why any MWC school would leave for the AAC – if anything, the absurd travel alone is enough reason to not want to leave.

New New stadium is well past due for UH campus. It should attract many schools that recruit Houston area heavily.