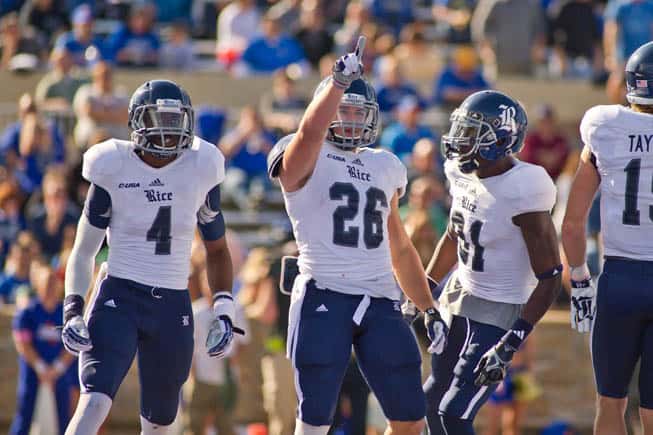 The Hawaii Rainbow Warriors and the Rice Owls have scheduled a home-and-home football series for 2014 and 2018, both schools announced today.

Hawaii will travel to face Rice at Rice Stadium in Houston on Oct. 4, 2014. The Owls will return the trip to Aloha Stadium in Honolulu on a date to be determined in 2018.

Rice previously had four non-conference games scheduled for the 2014 season, but New Mexico State had to drop their game scheduled for Sept. 6 due to their transition into the Sun Belt Conference.

“When we were faced with the challenge of replacing New Mexico State at such a late date, we knew we faced an uphill battle in securing an FBS opponent, but that was always our first priority,” Rice Director of Athletics Joe Karlgaard said in a statement. “Rick Mello (Rice Senior Executive Athletic Director) was very diligent in his search and we are excited to welcome Hawai’i back to Rice Stadium.”

The game with Hawaii completes Rice’s schedule for the 2014 season. The Owls open the season at Notre Dame and then, after an off week, travel to Texas A&M. Rice’s fourth and final non-conference game is at Army on Oct. 11.

With the addition of Rice, Hawaii will take advantage of the Hawaii Exemption and will play a 13-game schedule in 2014. The Rainbow Warriors also host Washington, Oregon State, and Northern Iowa and travel to Colorado.

The 2014 MWC schedule, which dates have not been released for yet, has Hawaii hosting Nevada, UNLV, Utah State, and Wyoming and visiting Colorado State, Fresno State, San Diego State, San Jose State.

This news blows for UH. Sounds like we’re stuck having to add a 2nd FCS team to complete our schedule. What a way to open a new stadium.

Rice needed a home game. The Hawaii game gives Rice 5 home games in 2014. If Houston refused to play at Rice, it makes sense that Rice scheduled Hawaii instead.

Houston AD Mack Rhoades said that Houston was willing to play an away game rather than schedule a second FCS team.

But I doubt OS wants an away game the week after traveling to Hawaii. Depends on $$$.

Prairie View A&M could use an FBS opponent. How about it Cougs?

Houston currently has 6 home games and 5 away games scheduled. Although a seventh home game would be nice, it isn’t necessary. I’d like to see a home and home scheduled with Oregon State. The 2014 game could be played on 9/13 at Corvallis with a game in Houston to be played later.