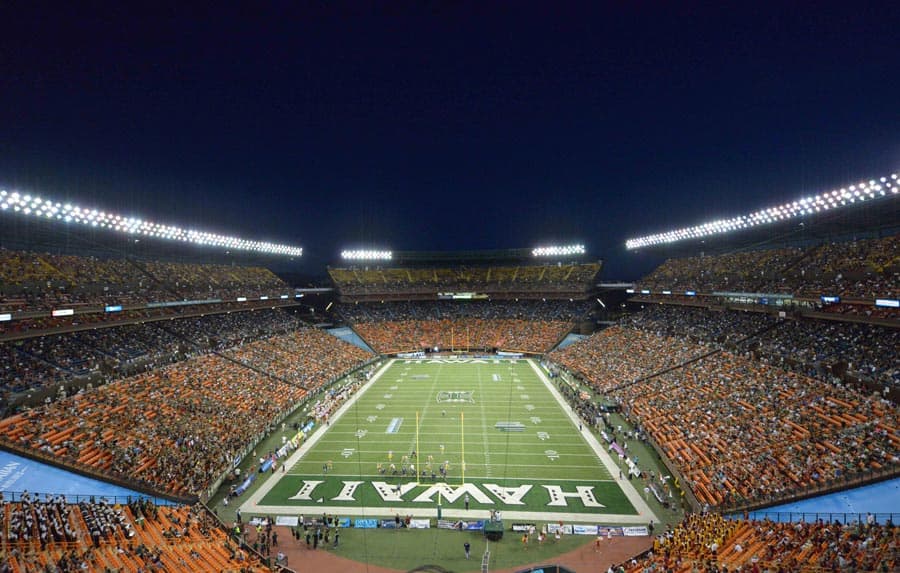 The Hawaii Rainbow Warriors and the Oregon Ducks have scheduled a three-game football series beginning in 2020, the schools announced today.

In the first two games of the series, Hawaii will travel to face Oregon at Autzen Stadium in Eugene on Sept. 19, 2020 and Sept. 16, 2023. The Rainbow Warriors will then host the Ducks at Aloha Stadium in Honolulu on Sept. 21, 2024 to complete the series.

Hawaii and Oregon have met seven times on the football field, but not since a 36-16 UH win in 1994 in Honolulu. The Rainbow Warriors have won the last three games against the Ducks, but trail in the overall series 4-3.

Hawaii has also added two games to an existing home-and-home series with the Arizona Wildcats. The two teams will now meet in Tucson in 2016 and 2020 and in Honolulu in 2019 and 2025.

Additionally, Hawaii has scheduled two future games against teams from the Football Championship Subdivision (FCS). UH will host Western Carolina on Sept. 2, 2017 and Fordham on Sept. 12, 2020. Hawaii has never faced either program in football.

Frankly, I know this is more charity than not, but I feel Hawaii should be a full member in the PAC12. Personally, I feel Hawaii can be a valuable asset to the NCAA, but they need help. There had been some threats by the AD that they might even need to shut down their football program… I feel this would be terrible. The only way I see Hawaii being able to sustain football is if they are able to become full PAC12 members.

Some will argue this will deplete the level of competition in the PAC12, but for once, conference realignment needs to get it right and help pick a athletic department up rather than try to run them into the ground. To complete the addition of Hawaii, San Diego State, Boise State, or UNLV would be ideal.

Then again, this is all my opinion and I am not being overpaid to run college athletics into the ground.

Ryan, thanks!! It would be a nice dream come true for us Rainbow Warrior fans.

BYU, but wouldn’t SDSU, be a better fit. They always seem to be on the cusp of better things and perhaps like, TCU, with P5 conference affiliation could draw better coaching and upgrade the talent level.

Jack, yes, very true. They would be a great fit.

Sorry, I meant BYU and SDSU.

On the other hand, Hawaii is a better fit based on research university status which PAC has always valued as much or more than athletic history … WSU is best example of this.

Hawaii would be a good fit because of the television market. Hawaii would add over 1.2 million households to the Pac12 Network.

BYU will never work as they flat out don’t play any sport on Sunday. The Pac-12 has way too many sporting events that occur on Sundays and they don’t want to work around BYU’s availability.

The Pac-12 could add SDSU in the south and Wyoming or San Jose St in the north. I’d LOVE to see them add Boise St, but apparently the academics don’t blend well. Nevada would be an OK addition, UNLV meager in football but strong in basketball. Maybe the Pac-12 could reach out to Air Force and/or Colorado St?

None of those teams mentioned offer any real benefit to the PAC. They don’t have enough financial endowment nor do they have a significant “footprint” in any TV market. If anything, the PAC would most likely strip the BigXII of Texas & Oklahoma in a crazy scenario before adding any of the above mentioned teams.