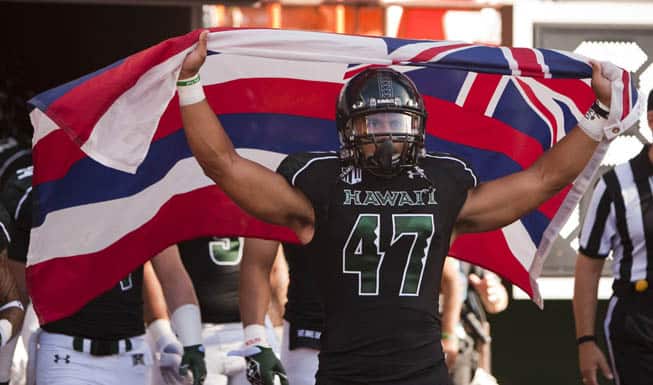 Last week, the Kansas Jayhawks announced that they will play a home-and-home football series with the Hawaii Rainbow Warriors in 2016 and 2017.

On Monday, Hawaii confirmed that series plus announced that they will play at UCLA in 2017. The Rainbow Warriors also provided updates to several other games on their future football schedules.

Hawaii will travel to face the UCLA Bruins at the Rose Bowl in Pasadena on Sept. 9, 2017. The Rainbow Warriors are 0-2 against the Bruins, and the two schools haven’t met since the 1939 Poi Bowl in Honolulu.

“The addition of UCLA and Kansas elevates the strength of our non-conference football schedules,” said Hawaii Athletics Director Ben Jay. “Both are top-notch programs and are the type of teams our fans want to see us play. We will continue to schedule teams from these conferences to add to our future schedules and find every opportunity to showcase our student-athletes and our university to a national audience.”

The Rainbow Warriors also announced several changes to games that were previously scheduled.

Hawaii was slated to travel to Washington on Sept. 12, 2015 for the second and final game of their 2014-15 home-and-home series. That 2015 game has now been moved to a season to be announced.

Below is a look at Hawaii’s future non-conference football schedules through 2022:

Silly. Hawaii begged out of the BYU home and home series due to whoopings and now they will play UCLA road only to elevate schedule.

Hawaii got beat last year 41-0 @ BYU and then they backed out of multiple games.
BYU should have kept it closer and this series would still be on.

Nobody’s commented on Kansas being called a “top-notch program”…?

Scheduling for 2022? Seriously? The Lunar University Aeros (on the Moon) need a home and home with a ‘Power 5 Conference’ team. I think that’s their first bowl eligible year as D-1.