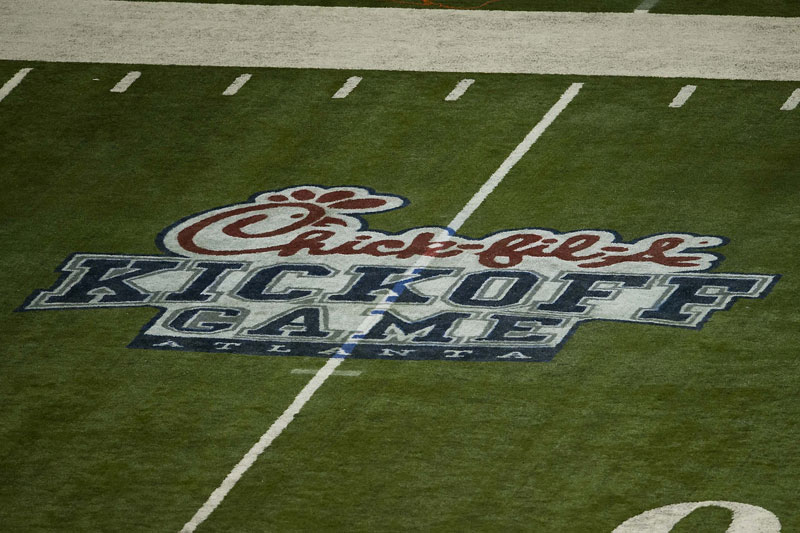 Georgia Tech and Tennessee could meet in Atlanta in 2017. (Paul Abell-USA TODAY Sports)

The Georgia Tech Yellow Jackets and the Tennessee Volunteers are close to completing an agreement to play in the 2017 Chick-fil-A Kickoff Game, according to reports.

“I’ve heard through the grapevine there may be some talks about opening the season here in the Falcons’ new stadium in ’17 with Tennessee,” Johnson said.

According to the AJC, the Georgia Tech-Tennessee game would take place on Monday (Labor Day) and could be one of three matchups that season. Other games would likely be played on Thursday and Saturday.

The game would also be played in the new Atlanta Falcons Stadium, which is slated to open in time for the 2017 season. Ground was broken on the $1.2 billion stadium in May.

Currently, Georgia Tech already has two non-conference games set against SEC teams in 2017 — at Ole Miss on Sept. 9 and home vs. Georgia on Nov. 25.

Tennessee is slated to open the 2017 season at home vs. Southern Miss on Sept. 2. That game would likely be postponed or bought out. The Vols are also scheduled to host Indiana State on Sept. 23 and play at Memphis on a date to be determined.

Next season’s matchup features Auburn vs. Louisville, while a game for 2016 has yet to be announced. Reports last year had Florida State and Georgia participating.

What a nothing match up of teams. TN has sucked for a decade and Gtech is good once every 10 years. This is as bad as 2012 TN vs NC State or this year Boise and Ole Miss.

You never know, Tennessee & Ga.Tech can be pretty good in 3yrs. I think the Boise St vs Ole Miss should be an entertaining game.

Tennessee will be very good again by then. They are recruiting at an elite level under Butch Jones. To clarify, Tennessee has sucked for 6 years. The previous two years to that they won 9 games. The program fell apart with the ridiculous hiring of Lane Kiffin and then the horrible timing of him leaving for USC. Derek Dooley was then hurriedly rushed into the job to fill the position. He will go down as the worst coach in 118 years of Tennessee football. The program is now recovering but you won’t see Tennessee getting back to 9+ game winning seasons until 2015 or 2016. Butch Jones is quickly get the Vols back as one of the top 15-20 programs in the country, a position of which they historically keep.

GT is going to play UG, Tenn and Miss in the same season? I don’t believe it.

Overrated?? Bama seems to be always competing for an SEC or National Championship but to some respects so does Auburn.

FSU needs to get in one of these games vs. Alabama, Georgia, or LSU.

Georgia Tech had a great season this year and UT is getting better quick. “Butch Please” is “getting-er-done”. schoup needs to learn how to count. Phil Fulmer won the SEC East the year before they fired him and won more games then any coach in America while he was head coach. Thanks Cannonvol

Is this a done deal?

Yeah Iowa said the same thing and you see how that turned out…Tennessee will be stacked.