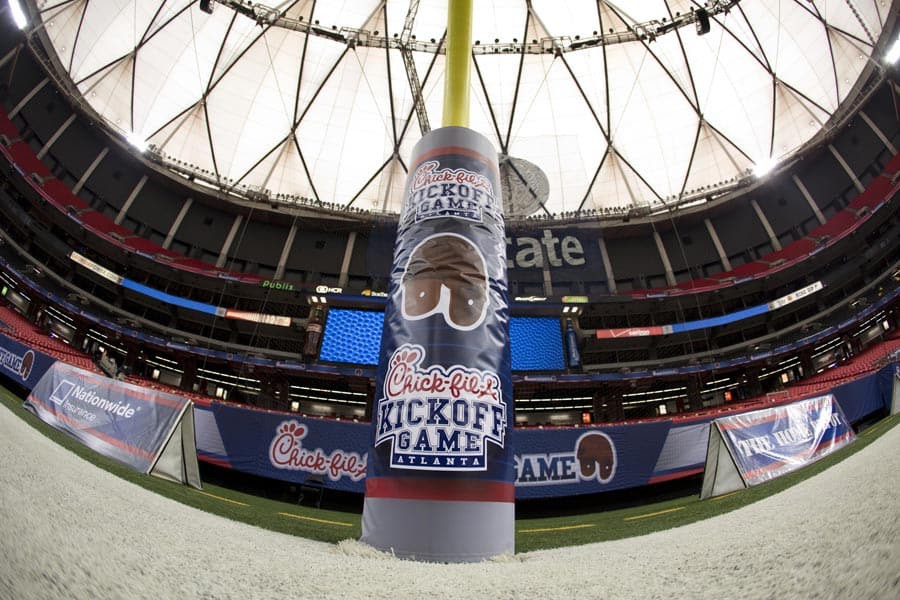 A long rumored matchup for the 2017 Chick-fil-A Kickoff is finally official. The Georgia Tech Yellow Jackets and the Tennessee Volunteers will meet on Monday, Sept. 4, 2017 (Labor Day).

Last month, it was announced that the Alabama Crimson Tide will face the Florida State Seminoles. That game will be the first of the two matchups and is set for Saturday, Sept. 2.

Both games will be played at the New Atlanta Stadium in Atlanta, Georgia and both will be televised nationally by ESPN.

Georgia Tech and Tennessee have met 43 times, but not since a 1987 matchup in Knoxville. The Volunteers lead the overall series 24-17-2.

“We are looking forward to and are very excited to open the 2017 season in the Chick-fil-A Kickoff Game in Atlanta,” said Butch Jones, Tennessee head football coach. “It will be a great opportunity for our program to play in a new state-of-the-art facility while playing on a national stage. The state of Georgia is very important to us in recruiting footprint, and that coupled with our alumni base and passionate fans, will make for a very exciting experience.”

The addition of the neutral-site game tentatively completes the 2017 non-conference schedule for Tennessee. The Volunteers are also scheduled to host Southern Miss (Sept. 16), Indiana State (Sept. 23), and UMass (Nov. 4).

Great matchup! I enjoy playing neighboring schools such as Auburn,Alabama and Tennessee. Wish we played these teams more often. The Atlanta staduim is gonna be a great facility! Go Jackets! #Together we swarm!

Looking forward to this game with my cousin Susan Soi she is a Tech fan and I well I may be from Georgia but Tennessee is where my heart is. I’ve been a Vols fan for the last 25 years win,lose, or draw. I bleed Orange.Looking forward to spending this day with you cuz. Wish you the best of luck …..NOT.