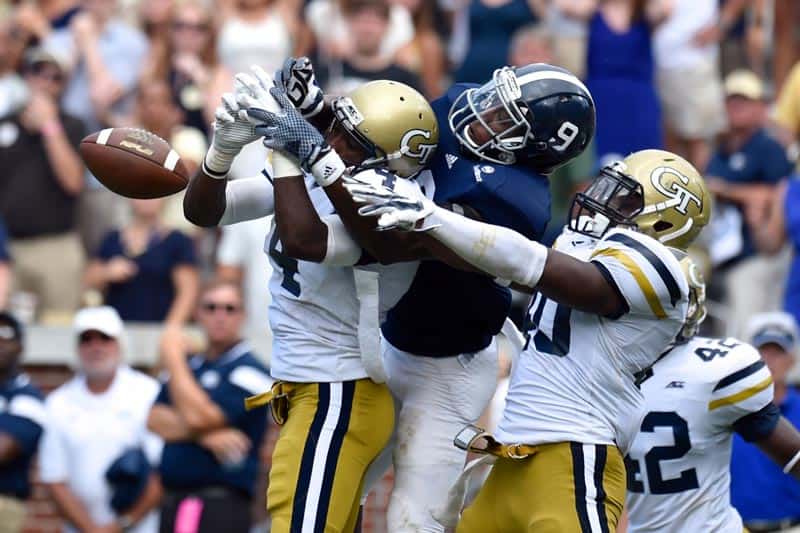 The Georgia Tech Yellow Jackets and the Georgia Southern Eagles have scheduled a football game for the 2016 season, both schools announced today.

Georgia Tech will host Georgia Southern at Bobby Dodd Stadium in Atlanta on November 19, 2016. The game will be only the second meeting between the two in-state schools following Georgia Tech’s 42-38 victory in Atlanta earlier this season.

The addition of Georgia Southern tentatively completes the 2016 football schedule for Georgia Tech. The Yellow Jackets are slated to open the season at home vs. Mercer on Sept. 3, host Vanderbilt on Sept. 17, and travel to bitter rival Georgia on Nov. 26.

Georgia Southern also now has their 2016 non-conference schedule tentatively finished. The Eagles are scheduled to open the season vs. Savannah State on Sept. 3 and visit Western Michigan on Sept. 24 and Ole Miss on Oct. 8.

“Playing a high-quality opponent within just a few hours of campus benefits both programs and scheduling this game is a win-win situation,” said Georgia Southern Director of Athletics Tom Kleinlein. “For us, with such a large number of our alumni living in the Atlanta area, we have the opportunity to bring their team to them.”

Bobinski, BAD BAD move scheduling this team the week before we play Georgia. I guess you missed the game this season where they were 42 seconds away from BEATING US on our OWN FIELD. Alabama A&M in 2013, good. Georgia Southern in 2016, bad.

Agreed! I think this should be scheduled as the first or second game of the season!! I do like the matchup, but not in November.

I know that Georgia Southern has been somewhat successful for a small program with limited resources, but if you are afraid of them, then you should be ashamed. They should be the worst caliber team on any Power 5’s schedule.

Tim Williams, the point is this shouldn’t be a team to be proud of putting on your schedule. It should be your worst out of conference game if you are one of the best Power 5 teams, especially one from the great SEC.

Sorry for the above mistake of SEC. I was just ridiculing the Georgia Bulldogs for being part of the great SEC. Still GT, this should be your worst team on your resume too.

Hey Maverick, they should be…but they aren’t. Hail Southern my friend

Why would you even want to watch Tech play Alabama A&M, irregardless of what week it is during the season or who your next opponent will be?

Mercer!?! A PFL team with no scholarships??? That’s embarrassing.

I think tech and GSU (the REAL GSU not the gag state whipping boys) could become rivals soon.. Similar offense, similar defense.. I don’t REALLY want it, cuz I’ve always been a tech fan.. Bowling Green never even heard of us.. But they were dominated and decimated by a team with a substitute coach!! No….Ga Southern is for real.. Dominating in FCS.. Now playing power 5 teams to the wire… Think again if you even THINK that’s a Patsy on your schedule! ALL 3 Georgia FBS TEAMS ARE FOR REAL… Ok.. There’s 4… But THAT one IS a thug lipped inner city school wanna be.. The only and I do mean ONLY REASON THEY BEAT US THIS YEAR HAD NOTHING TO DO WITH THEIR MEDIOCRE TEAM!! They won because WILLIE QUITS AND HIS STAFF WERE TOO BUSY LOOKING FOR EITHER HOUSES IN LOUISIANA, or NEW COACHING JOBS.. Their “take this job and SHOVE IT!” Filtered down to every player on the team… Causing a loss to the worst team ever to claim to be FBS… Speaking of thugs.. I want my 750k back you stole from us during negotiations!