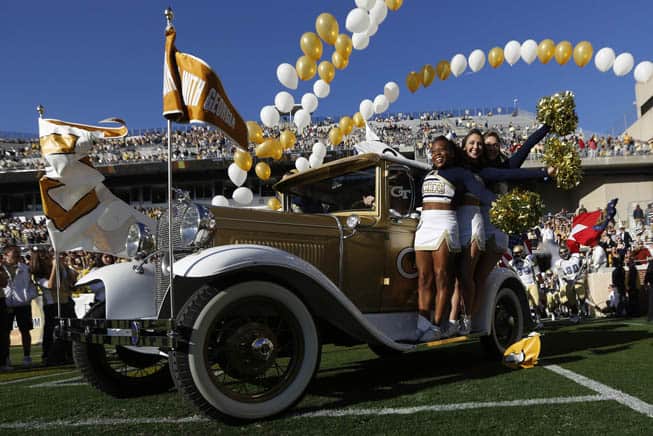 Georgia Tech will host Mercer at Bobby Dodd Stadium in Atlanta on Sept. 3, 2016. The game will be the season-opener for both schools.

“We are pleased to add Mercer to our 2016 football schedule,” Bobinski said. “This is part of an ongoing effort to support and accentuate college football in the state of Georgia. Our yearly contest with Georgia and the addition of Georgia Southern and Mercer helps us meet that objective.”

Georgia Tech played their first ever college football game against Mercer way back in 1892. The Bears won that contest 12-6, but then fell to the Yellow Jackets in the next 11 meetings.

“We are excited to play a great institution like Georgia Tech,” said Mercer Director of Athletics Jim Cole. “The Yellow Jackets have a rich history of excellence in academics and athletics and we are thrilled to renew a football tradition that dates back over 100 years.”

Mercer, which is rebooting their football program this season after a 72-year hiatus, will be a member of the Southern Conference in the FCS. The Bears open the season against Reinhardt on Saturday, Aug. 31.

Per a copy of the contract, Georgia Tech will pay Mercer a $300,000 guarantee for the game.

Mercer also has to certify in writing prior to Aug. 1, 2015 that they will average 90% of the permissible number of grant-in-aid per year over a rolling two-year period, to satisfy the provisions of NCAA Bylaw 20.9.7.2.1.

Mercer!!?? Oh mercy. Obviously a $$$ game for Mercer’s upstart program. Need to think about playing in city rival GA State from Sunbelt Conf. That would make more sense. They are in Div I now

2016 is the 100 year anniversary of the thriller between Georgia Tech and Cumberland. Shouldn’t they give Cumberland a chance to avenge that 222-0 squeaker?

And before you point out that Cumberland doesn’t have a football program, keep in mind that they didn’t really have one in 1916 either.

Right on, Bill! Right now Cumberland and Alabama have something in common – namely that Georgia Tech won’t play either of them! Ga Tech cancelled games with Bama this year and in 2014. Cumberland approached Tech about a 10/7/16 game and TECH WANTS NO PART OF CUMBERLAND. Reportedly Cumberland offered to throw in a baseball game to let Tech baseball a rematch of the spring 1916 game that saw them lose to, eh, some team wearing Cumberland uniforms by a 22-0 score.

And yes, Cumberland is playing football now and should be NCAA Division II by 2016, so throw out the “won’t play NAIA teams” excuse. Mottos being thrown around up here are “Atlanta – home of two great chickens – Chick-Fil-A and Ga. Tech Football,” and “Hear my bark, feel my bite, Ramblin’ Wreck is now in sight.”

Will Georgia Southern count as an FCS opponent next season as if so they will be playing 2 D1AA teams again. Hope the AD realizes you can only count one FCS win towards a bowl game so the 2nd one is a waste of a game much less a ripoff to the season ticket holders.

No, Georgia Southern will be a full member of the Sun Belt.

Kevin, The Sun Belt is FBS in name only. From a SOS standpoint, Georgia Tech would get a tougher game from a FCS team.

Brad, Southern has lost in the FCS semifinals the last 3 or 4 years… so really only 2 or 3 FCS programs are better than Southern.

I’ve heard that GT is in discussion to play St. Olaf’s in 2018 and Bemidji St. in 2019. Let’s see if those contracts get signed. The ACC is such a farce when it comes to football. Is Clemson playing Wofford or the Citadel this year? I can’t wait for the playoffs in the next few years and the first team that goes 12-0 and doesn’t make them because their non-conference sched was abysmal. It is the only way these schools will change. Maybe it would be best for college football if the five BCS conferences form their own division and then only schedule within their own division.

Show me a team that doesn’t schedule FCS teams on the regular. I dare you.

and Hawaii played Weber in 2008, Central Arkansas in 2009Charles Southern in 2010 and Lamar in 2012; and they play Northern Iowa next year; Buddy

I was referring to this year only for Penn St. and Hawaii. However, looking at future schedules, Penn St. plays no FCS schools and Hawaii has only Northern Iowa on their’s for the future. Far less than what the ACC has.

For you being a smart @$$ about Clemson football, they have CMU scheduled but canceled when the ACC went to 9 games to reserve UGA. Then they went back to 8 so they had to schedule someone (SCST). And you wanna talk about strength of of schedule? A top 5 Georgia team and maybe a top 5 but defiantly Top 10 South Carolina team on the road. Before you talk, you you’re facts before you sound ignorant.

I wish that they would schedule Coastal Carolina! I understand that there is a mounting tide of interest in that game.

Only mounting Tide in college football right now is based out of Tuscaloosa. Roll Tide Roll.

Before everyone blindly accuses a team they know nothing about for scheduling a soft team,

The Alabama series is pending.

Quite a bit of SEC in there. Weird.

Harrison, Kennesaw Mountain and a few other area High Schools have opening! Come on Teach give them a shot

Kevin, I noticed on Georgia Tech’s future schedules page you have the Mercer game date as TBA, but in the article it says Sept 3, 2016.

Thanks, just neglected to update it after we obtained the date.

Mercer going 10 and 2 in their first season (NCAA, Division 1 record for first year program) who
had over 90% freshman, will be a senior talented team in 2016. Georgia Tech, do not take them lightly.

FYI: Mercer was the very first football team Tech ever played, way way back in 1890-something. This has historic context and value beyond “instate cupcake.” Just sayin’.