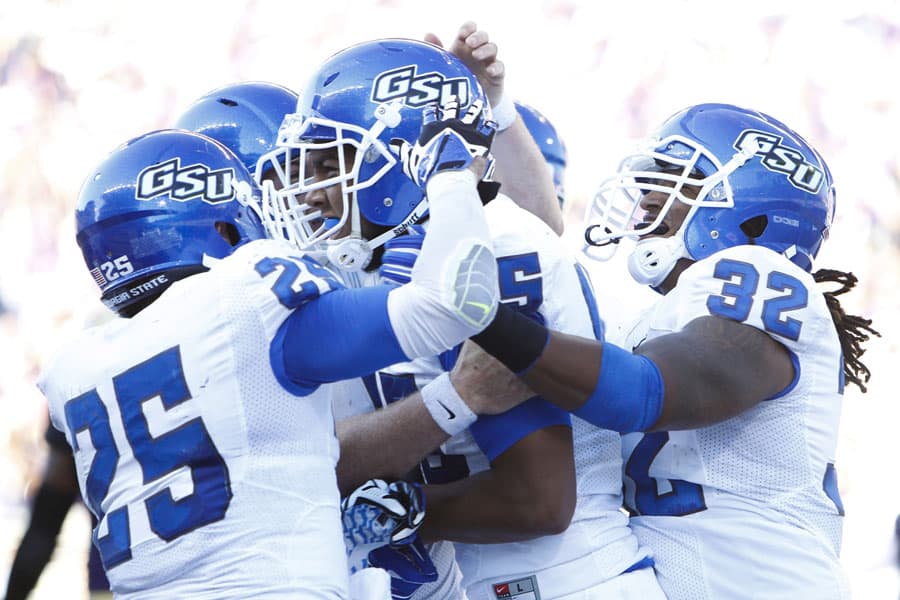 The Georgia State Panthers will play at Alabama in 2020 and at Auburn in 2021, FBSchedules.com has learned via an open records request to GSU.

Georgia State will travel to face the Alabama Crimson Tide at Bryant-Denny Stadium in Tuscaloosa on Sept. 12, 2020. Per terms of the contract, Alabama will pay Georgia State a $1.3 million guarantee for the game.

On Sept. 25, 2021, Georgia State will travel to face the Auburn Tigers at Jordan-Hare Stadium. Auburn will pay GSU a $1.25 million guarantee for the game, which will be the first meeting between the two schools.

Georgia State is currently 0-3 against teams from the SEC. The Panthers also lost 51-13 at Tennessee in 2012.

Games against Alabama in 2020 and Auburn in 2021 are the first scheduled for Georgia State for both seasons.

If your going to schedule a GSU, might as well be the one that definitely gives you a win. HAILSOUTHERN!

I don’t recall SOUTHERN ever beating BAMA – so not sure about this definite win smack-talk? As always – if you can’t get into to college – then go to SOUTHERN!

Does anyone have a solution to these body bag games? I am not calling out any conferences. They all play these games. I am just tired of them. A prerequisite 10 conference games? (Sorry BigXII, need to have to at least live up to the name) +1 from the P5, giving everyone a single warm-up and that’s it. Maybe they need to add 10-15 scholarships to ensure depth in order to play these games. So be it. One decent P5 team plus a few Sun Belt or MAC teams and Cal-Poly or Furman non-con gives no one a subjective point of view when comparing teams for the Playoff.

I say make 9 conference games mandatory for all conferences, both the P5 and the G5. Have P5 teams schedule 1-2 G5 games and the remainder against another P5 team. No more FCS match-ups, even for the G5.

Those other schools programs would not survive without these payout games. Besides, no way SEC is going to do that and have every team lose and throw away chance at playoff.

Lack of class scheduling Georgia State which will likely go the way of UAB and drop football. in the near future.Troy State would love to play both teams but neither has the class to give them a game. That is gutless.

Georgia State just started football in 2010 and immediately jumped up to the Sun Belt. They have made their bed and therefor must lie in it, so they are not going to drop football.

Seems that it would bring more interest for fans if Georgia State played UGA or Georgia Tech instead.

Do people who post here on these type of games…understand the reason behind them.. it is financial ?…and every AD at a SEC school must maximize revenue to ensure that other sports on his watch can compete successfully…home and home games will not ensure the universities balance sheet…plus many SEC towns rely on 7-8 home football games to carry the small mom and pop vendors for the other 358 days of the year…if you schedule a neutral site game or home and home game…you may have a revolt from hoteliers, restaurants, gas stations etc.