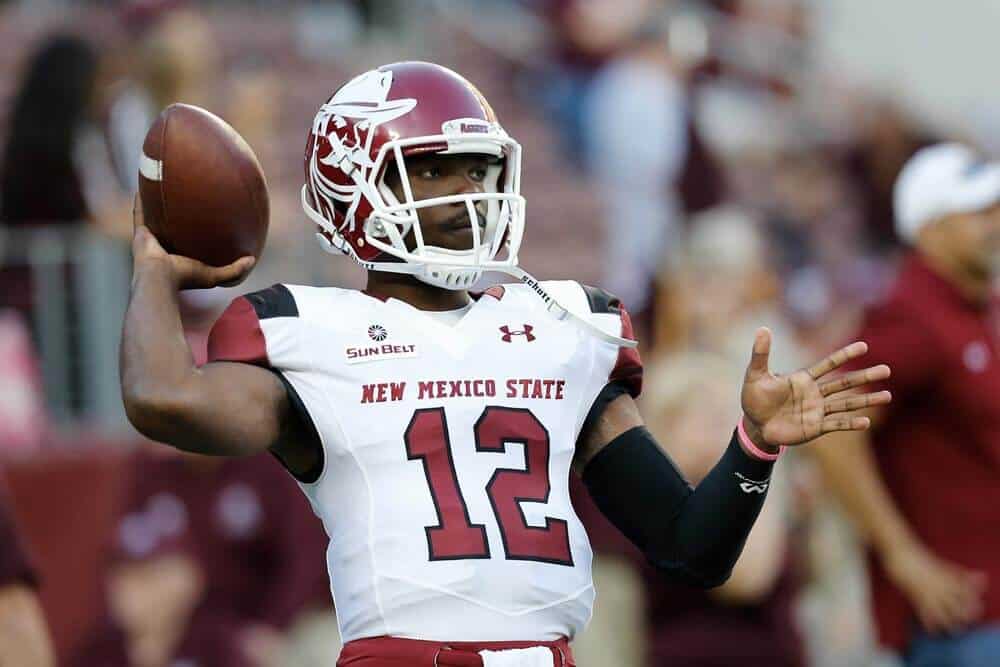 The Georgia Southern Eagles and the New Mexico State Aggies have scheduled a home-and-home football series for 2018 and 2019, both schools announced on Thursday.

In the first game of the series, Georgia Southern will travel to face New Mexico State at Aggie Memorial Stadium in Las Cruces on Oct. 20, 2018. The Eagles will then host the Aggies at Paulson Stadium in Statesboro on Oct. 19, 2019.

Georgia Southern and New Mexico State, both current members of the Sun Belt Conference, have met three times on the gridiron. The Eagles beat the Aggies in all three contests, including 22-19 this past season in Las Cruces.

Georgia Southern was previously scheduled to play Kent State in a home-and-home series in 2018 and 2019, but that series has been canceled.

“Kent State approached us in regards to making a change to the status of our scheduled series,” said Georgia Southern Director of Athletics Tom Kleinlein. “We respect their request and have terminated the contract with them. New Mexico State is a familiar opponent who was also looking for games, and we are excited to work out this deal with the Aggies. The El Paso and Las Cruces areas are parts of the country our fans have enjoyed traveling to and I have no doubt they will enjoy it again in 2018.”

New Mexico State will be playing their final season as a member of the Sun Belt Conference in 2017. The Aggies will then compete in 2018 and beyond as an FBS Independent.

“We are happy to announce a series with Georgia Southern University, who not only has a rich football tradition but also one that we are very familiar with,” NMSU Director of Athletics Mario Moccia said. “Our goal in building an independent schedule was to secure as many games with Group of 5 opponents as possible and this is a big step in completing our 2018 schedule, which we have been diligently working on.”

The Aggies now have six games scheduled for their first season as an FBS Independent in 2018, which includes their annual rivalry games vs. New Mexico and UTEP.

New Mexico State is scheduled to open the 2018 season vs. Wyoming (Aug. 25) and visit Minnesota (Aug. 30) and UL Lafayette (Sept. 8 or Oct. 6) before hosting Georgia Southern on Oct. 20. Dates for games against New Mexico and UTEP are to be determined.

NMSU is FBS Independent…Idaho is the obscure FBS school that is dropping down to FCS…first FBS school to ever do so. Georgia Southern had a home and home scheduled with Kent State but Kent recently requested that Georgia Southern allow the discontinuation of the series which is why the NMSU/GS series was scheduled…to replace the Kent State/GS series.

I am well aware, what I am implying is that I do not think NMSU will be a viable FBS program and will ultimately need to drop down just as Idaho did. Unless the MWC wants to move somebody up (my best guess would be Eastern Washington as Montana/Montana State and NDSU/UND/SDSU/USD seem to be tied together) and make an even number there’s nowhere for NMSU to go but down.

I know they won’t take it, but the Big Sky will have an opening after 2019 when UND will leave. The Big Sky could offer them full membership since the conference will have 11 full-member schools after spring 2018, and 12 is easier to deal with than 11.

Just a thought, but I know that the Aggies want to stay at FBS.

Getting together a schedule for 2018 will be tough but I hope NMSU can stay in FBS. If they can vulture a few more games with schools that other schools cancel on, they can cobble together enough games.

It has been surprisingly silent on the 2018 scheduling news front for NMSU. I think we’ve heard more from Liberty in their few days in FBS.