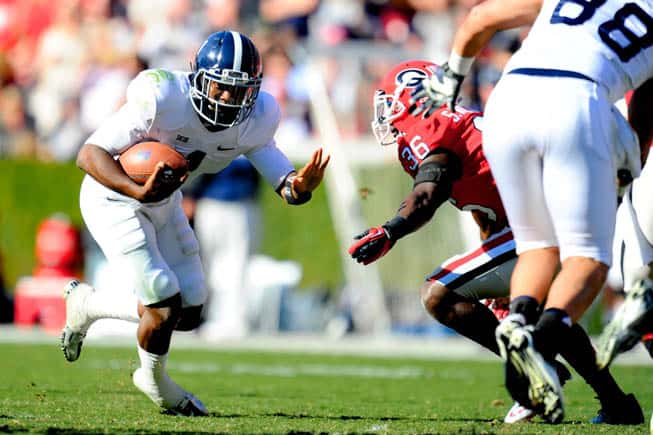 The Georgia Southern Eagles will play at Navy in 2014 and are close to finalizing deals to play at Georgia Tech and NC State.

Georgia Southern is set to join the Sun Belt Conference on July 1, 2014. They will be eligible to compete for the Sun Belt Championship in 2014 and can accept invitations to bowl games after the 2015 regular season.

Georgia Southern will travel to face Navy at Navy-Marine Corps Memorial Stadium in Annapolis on Nov. 15, 2014. In their first and only meeting back in 2010, the Midshipmen beat the Eagles 13-7.

Georgia Southern is also close to finalizing contracts to play at Georgia Tech and NC State in 2014, the Savannah Morning News has reported. GSU has never faced either school in football.

The Eagles are currently scheduled to open the 2014 season with back-to-back home games against Duquesne on Aug. 30 and Hampton on Sept. 6. However, both of those games were scheduled prior to GSU accepting an offer to join the Sun Belt. One of those games will need to be canceled if Southern adds three FBS non-conference games.

Georgia Southern is also slated to visit LSU on Sept. 13, 2014. But due to the addition of Navy and possibly Georgia Tech and NC State, there is speculation that the LSU game will be moved to the 2015 season.

The addition of Georgia Southern would complete Georgia Tech’s 2014 non-conference schedule. The Yellow Jackets are also set to host Wofford and travel to Georgia and Tulane.

NC State already has four non-conference games lined up in 2014, so they will need to cancel or postpone one in order to host Georgia Southern. The Wolfpack’s 2014 schedule currently includes home games against Old Dominion and Presbyterian and trips to Central Michigan and USF.

The AJC reported on April 19 that Georgia Southern and Georgia Tech have verbally agreed to move their game scheduled in 2015 (Sept. 5) to the 2014 season.

Okay GaSo – Let the beatings and whoopings commence!
Was the move to FBS really very good for the program?

short term no. They have to pay for the upgrade somehow. Look At Western Kentucky third year FBS and they moved to C-USA which is still a step up from what they had 4 to 5 years ago. They stand to gain more exposure and more money for these types of games. For basketball 3 out of the last 5 years the sun belt has had better RPI then the southern conference had. With that they have a harder chance to make the BB tournament they have a better chance of getting a better seeding in the tournament. You also have to think that the flagship SOCON school is leaving in all sports to the sun belt(APPY state)

App State Flagship?? Are you kidding me, GA Southern has 6 national championships and owns the Southern Conference, without GSU the socon is a joke…App st couldnt fold towels for the eagles….

Wow? In your mind AppyState is a flagship?

The State of North Carolina is now supporting six or more FBS programs. Good luck living at the bottom of that hole AppyState!

Is Georgia State an FCS Independet before joining the SBC?

In 2013, they will be a member of the Southern Conference but ineligible for the playoffs.

In 2014, they will be a full member of the Sun Belt but ineligible for a bowl until after the 2015 season.

Herandos asked about Georgia State (GSU), not that stinkhole GaSo.
Yes GSU was a newby FCS program that was in the CAA for one year
after being an FCS independent for two years. They started in 2010.

You have had greaat success playing “small college” football. Now, put on your big boy pants and let’s see what you can do. It’s to late to take your foorball and go home.

this game can gain more interest of people in worldwide network

Georgia states fb program is a joke. Watch how quickly both GaSou and App St dominate that conference.