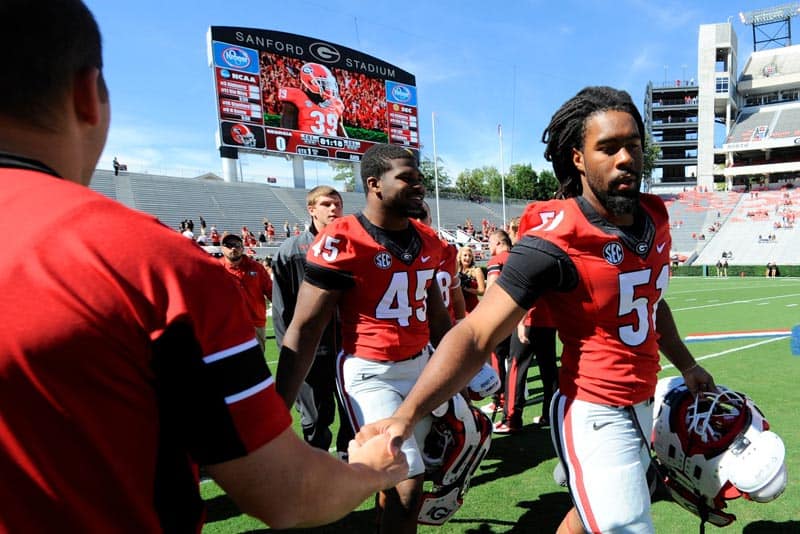 The Georgia Bulldogs have added the Samford Bulldogs to their 2017 football schedule, according to a memorandum of understanding.

Georgia will host Samford at Sanford Stadium in Athens on a date to be determined. The two schools have met once on the football field, a 39-0 Georgia win in Athens in 1943.

Samford is a member of the Southern in the Football Championship Subdivision (FCS). The Bulldogs will receive a $500,000 guarantee for playing the game.

Georgia has now tentatively completed their non-conference football schedule for 2017. The Bulldogs are also scheduled to travel to Notre Dame on Sept. 9 and Georgia Tech on Nov. 25 and host Appalachian State on a date to be announced.

SEC games for the Bulldogs in 2017 include Kentucky, Mississippi State, Missouri, and South Carolina at home and Auburn, Tennessee, and Vanderbilt on the road. Georgia will also face Florida in Jacksonville on Oct. 28.

Georgia now has one FCS team scheduled for each season through 2017. The Bulldogs host the Charleston Southern Buccaneers this season, open against the Southern Jaguars in 2015, and host Nicholls State in 2016.

Beginning in 2016, each SEC school must play a minimum of one non-conference game against a team from another power five conference. Georgia already satisfies that mandate with their annual rivalry game against Georgia Tech of the ACC.

In 2017 and 2019, Georgia will also step out of conference to play Notre Dame in a home-and-home series.

Don’t worry, someone will come on here complain why Georgia isn’t play Michigan & So. Cal in the same year as Ga.Tech & ND….LOL

Gtech sucks. ND is the most over ranked and over-hyped program in the history of CFB. They haven’t won a major bowl game in 25 years. Btw, while other P5 conferences are reducing and eliminating FCS games and they play 9 game conf schedules.

Hey Ryan, you’re right. No one should have any complaints on this game. Heck, if Samford is good enough for Auburn to finish their season this year with, they should be good enough for the Bulldogs. Samford has some four impressive wins this season already; Stillman, VMI, Mercer and Furman. And the losses to Wofford and Chattanooga may be a little hard to swallow, but still a solid team to add to the schedule. Good addition, just wish Savannah State would have been available.

Hi Ryan, I think Georgia and the rest of the SEC East do a really nice job scheduling out of conference games, especially compared to the SEC West.

The reason people jump on the SEC, and they are usually Pac12 fans, is because the Pac 12 plays 9 conference games compared to your 8. In addition to those 9 games, they play at least 1 more power 5 team, which totals to 10 Power 5 games… But to make their schedule even harder, they might play 1 of 2 more power 5 teams. Or they may play 2 stronger group of 5 teams like from the Mountain West or AAC.

For example, UCLA played OOC this year, @Virginia, Memphis and @Texas. That is 11 games against power 5 teams, plus 1 game from an AAC team. Oregon played Michigan State, a MWC team, and a FCS team.

Your Georgia Bulldogs’ schedule is similar to Oregon’s, in that you play 10 power 5 teams. However, Oregon plays 5 away games compared to your 4 away games. With that, I still would say Oregon’s schedule is tougher than Georgia’s. UCLA’s schedule is much much tougher, as they played 6 road games.

Playing away, no matter who you’re playing against, is tough. The SEC doesn’t play in someone else’s house very often. And neutral sites are not very neutral when they are played in the south. When bowl season comes along, it’s tough for fans from other parts of the country to fly out. SEC teams drive a few hours for the day.

Almost EVERY FBS program schedules an FCS opponent. That is not the significant issue.

And B1G programs will discontinue scheduling FCS programs AND the same time will play a 9-game conference schedule.

Whereas most seasons the majority of SEC programs schedule TWO SunBelt, CUSA or MAC programs AND a FCS opponent each season. This is the significant issue.

The new SEC rule requiring at least one game against a P5 opponent is a step in the right direction. But until the SEC foes to a 9-game conference schedule, the SEC non-conference schedule will be a point of contention

The playoff committee will understand non-conference schedules when it comes final grading time.

Btw, Florida plays a FCS every year almost, in fact they lost to a FCS school in 2013. Ohio St, Stanford, Penn St, Oklahoma, and Texas also play FCS schools. This info is easily found on several websites. The only schools never to play FCS programs are ND, USC, UCLA..the only 3!

Another point please don’t be naive enough to believe the CFP committee is nothing but a fraud, it’s head is a SEC person. Ole MIss, MIss St, play no P5’s OOC this year and play woeful OOC’s and they are ranked high, just like the AP poll they are disregarding they play such lousy OOC that they start with a 8 game schedule. Throw in games vs cellar dwellers in the SEC each play atleast 2 and you’re down to 6 games. Btw, a point people are neglecting the 2nd place team in the SEC east lost at home to Indiana, a team that has not won a single game in the B10 and will be underdogs in every conf game the rest of the season. Please spare me the SEC hype, it’s teams that were inflated like Scar, A&M and teams who play cream puffs OOC like Ole MIss, Miss st getting inflated rankings which perpetuates all year. The CFP follows the AP poll and is a fraud in concept. All other CFB has a 16 team playoff that’s the right system for FBS too.

For 2015 non-conference schedules awaiting to hear:

And NM St has to drop one game which will generate a TBA for another program.

MIdmajors not having full 2015 is no big deal. There are 3 P5’s with open spots…Boston College, Miami, and Mizzou.

HAHA, SEC still rules and i love how much people hate us… another title coming soon

No doubt about it Ryan, the SEC totally rules; the Media and all of the empty blinded fools that believe whatever the evil four letter network says. You’re spot on. Don’t lose your sunglasses.