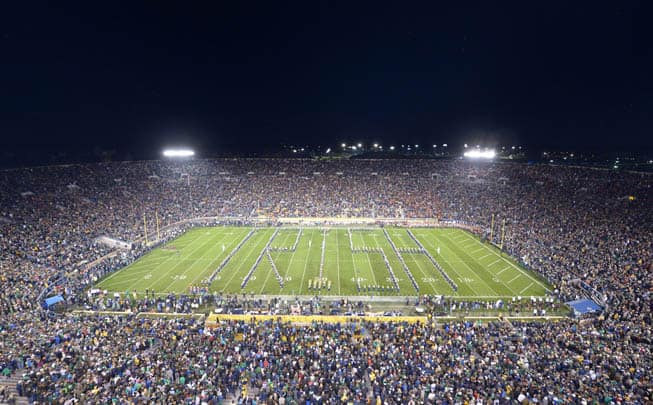 The Georgia Bulldogs and the Notre Dame Fighting Irish have scheduled a home-and-home football series for the 2017 and 2019 seasons, both schools announced today.

In the first game of the series, Notre Dame will host Georgia at Notre Dame Stadium in South Bend on Sept. 9, 2017. In the second and final game, the Fighting Irish will travel to face the Bulldogs at at Sanford Stadium in Athens on Sept. 21, 2019.

“This series will generate an overwhelming level of excitement for our student-athletes and supporters,” said UGA Director of Athletics Greg McGarity. “We have a tremendous amount of respect for Notre Dame and look forward to the start of this memorable experience.”

“Playing Notre Dame will be an honor and a great challenge for us,” said UGA head coach Mark Richt. “I have a lot of respect for the job Coach Kelly is doing there and I’m sure college football fans across the country will enjoy watching our two teams compete.”

The 2017 game will be the first meeting between the two schools since they met in the 1981 Sugar Bowl. Herschel Walker led UGA to a 17-10 victory, which ultimately led the Bulldogs to be crowned 1980 consensus national champions.

Notre Dame is the second scheduled non-conference opponent for Georgia for both the 2017 and 2019 seasons. The Bulldogs also play at in-state rival Georgia Tech both years.

The Fighting Irish have several games scheduled in 2017 and 2019 due to past commitments as well as their scheduling agreement with the ACC.

“As our football schedules evolved with the start of our Atlantic Coast Conference competition in 2014, we had future games slated with top-drawer opponents in virtually all the major conferences,” said Notre Dame vice president/athletics director Jack Swarbrick.

“One exception was the Southeastern Conference, so we are pleased now to be able to check that box. These will be two contests that will have great national appeal, in part because our only previous matchup came in a bowl game.”

“These are two very attractive football games against a Georgia program that also has impressive history and tradition. Mark Richt has done an excellent job keeping that program at the forefront, both in the SEC and nationally,” said Irish coach Brian Kelly.”

Good for both of them. This is what college football should be. Not hiding behind cowardly opponenets and doing a home & away. Neutral Site games are de facto home games in most cases. Alabama.

Amen, M. Sage. I am no UGA or ND fan, but I applaud both programs for scheduling this series. UGA’s recent scheduling history has its fair share of BCS programs (including home and away games), such as Colorado, Arizona State, Oklahoma State, and Clemson. Hat’s off to them for keeping it up. ND is one of the few FBS programs to have never played an FCS program, so while you gotta give credit to ND for this move, it’s not all that surprising. Now let’s see if ND can schedule Alabama or LSU.

Really dude didn’t Bama just get ripped by a Big 10 team that everyone throughout the season said was a bad conference and didn’t deserve to be in the final 4. Its in the past. God for both programs for the schedule at least its not southwest Louisiana st looking for some $ and an ass kicking at Bama.

Georgia cancelled the home-and-home series with Oregon, even though some wish to advertise otherwise.

That 2015 non-conference schedule appears to be one big SOS negative.

Certainly if the Bulldogs can firm up a series with the Seminoles, that would improve perception.

Georgia is trying to keep up with Auburn’s tough OOC schedule…..this is a good first step.

And how many times has Aubarn beat Georgia the last 4 years ?

Ah yes, rematches of that fateful 1981 Sugar Bowl where Georgia thoroughly deserved their national championship by scoring one of their touchdowns on a drive of less than 5 yards after Notre Dame refused to field a kickoff, and Buck Belue completed one whole pass.

And that pounding running back Hershel and Woerner with those critical plays.