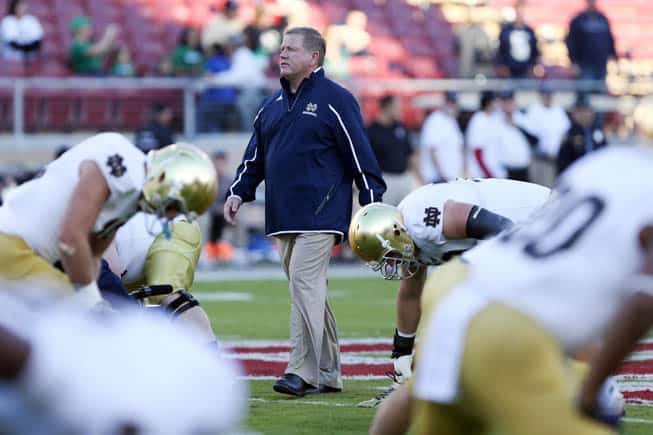 Notre Dame hasn’t faced an SEC team in college football’s regular season since 2005, but that could change in the future.

According to a report by Jeremy Fowler of CBSSports.com, Notre Dame and Georgia are in discussions to play a home-and-home series. The series would likely take place in 2018 and 2019.

University of Georgia athletics director Greg McGarity acknowledged that there have been discussions on a series, but nothing has been finalized on paper.

“I think it’d be great for the University of Georgia if we were able to make it happen,” McGarity said.

Georgia and Notre Dame have only met once on the football field — the 1981 Sugar Bowl at the Superdome in New Orleans. The Bulldogs defeated the Irish 17-10 in that game to claim the 1980 National Championship.

Georgia has remained stagnant in their future football scheduling due to the possibility of the SEC moving to a nine-game conference schedule. The Bulldogs don’t have any non-conference games scheduled past 2015 outside of their annual rivalry game against Georgia Tech.

The Bulldogs did have a home-and-home series scheduled against Ohio State for 2020 and 2021, but the Buckeyes canceled the agreement over uncertainty with the Big Ten schedule.

Notre Dame is in a different position. The Fighting Irish are contracted to play five ACC teams per season and will also play Navy, Stanford, and USC annually. That leaves them with four games to schedule each season, and some of those spots will occasionally be filled with Big Ten teams such as Michigan, Michigan State, and Purdue.

News of a potential series between the two schools first broke last year when Notre Dame head coach Brian Kelly said that Georgia would be a “natural matchup” for the Irish. The State of Georgia is talent-rich and is heavily recruited by Notre Dame and other top schools.

This is the type of game the Irish need to play if they intend to not get embarressed during the National Championship. More games against fast SEC, fewer against the slow Big 10

Seats 92,746. It’s sufficient because it would be a UGA home game, not a neutral site.

They could always play Wake and Duke in Charlotte.

This would be a fun game for College Football fans, I would pay to see it.

Why would Georgia want to play Notre Dame? If they win so what. If they lose their season is ruined. There are no N. D. fans in Georgia. They would do better to play GA State or GA Southern, even Mercer. Football has a new face in Georgia