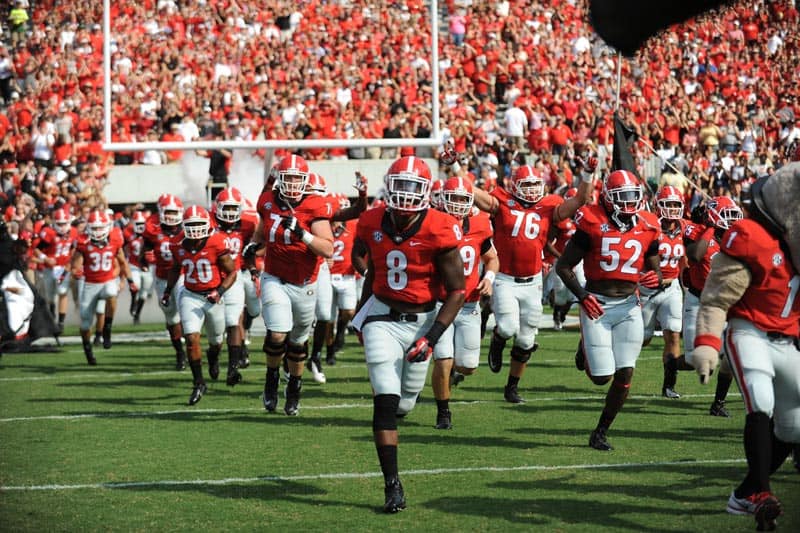 The Georgia Bulldogs have added the Nicholls State Colonels to their 2016 football schedule, according to a memorandum of understanding obtained from UGA.

Georgia will host Nicholls State at Sanford Stadium in Athens on a date to be determined. The two schools have never met on the football field.

Nicholls State is a member of the Southland Conference in the Football Championship Subdivision. The Colonels will receive a $525,000 guarantee for playing the game.

Georgia now has two of their four non-conference games for 2016. The Bulldogs are also scheduled to host Georgia Tech on the final weekend of the season (Nov. 26).

SEC games for the Bulldogs in 2016 include Auburn, Tennessee, and Vanderbilt at home and Kentucky, Missouri, Ole Miss, and South Carolina on the road. Georgia will also take on Florida in Jacksonville on Oct. 29.

Georgia now has one FCS team scheduled for each season through 2016. The Bulldogs host the Charleston Southern Buccaneers this season and open against the Southern Jaguars in 2015.

Back in June, Georgia announced a home-and-home football series with Notre Dame for 2017 and 2019.

East Carolina, Southern Miss, Marshall, Memphis, UAB, UCF, and South Florida would love a game with Georgia. And I’m sure that Georgia fans would much rather see these guys on their schedule, than a FCS school every year.

Take Southern Miss, Memphis, UAB and South Florida off that list, please. They are four of the worst programs in the nation and would have no shot against Georgia. Hell those four shouldn’t even be lumped in with Marshall, ECU, and UCF. Those three would at least have a shot at beating Georgia, unlike the other four

USM and USF were ranked 3 or 4 years ago. All thise teams have a shot at being decent in 3 years.

My point is that these schools are a better challenge than an FCS school.

georgia is not smart, they wont get into teh playoff, PLAYOFFS! by scheduling Nicholls State, but i lived in georgia once and their knot vury smart down round dem parts, east carolina would be a much better game, greg 1.0, they could play in charlotte and atlanta

Just as long as there aren’t “too many” power teams. Then fans will complain that their schedule is overloaded.

As a UGA fan I would rather see us play Nebraska or Texas than any of these schools. We don’t want to play a South Florida or a Southern – we want to play national teams.
Under the old AD we would take some great road trips – Colorado, OK ST., and we were scheduled for Oregon. Those are great trips and that is “College Football”!

I completely agree. I made trips to Tempe and Boulder to see the Dawgs play and would love to travel to more places to root for my team.

sure legend and then when Mark Richt doesn’t win “enough games” you’d start screaming for his job, like you guys do every year. Face it folks, you go to nothing but P5 vs P5, and this sport will go bye bye.