Georgia moves up to sixth in Week 6 college football polls 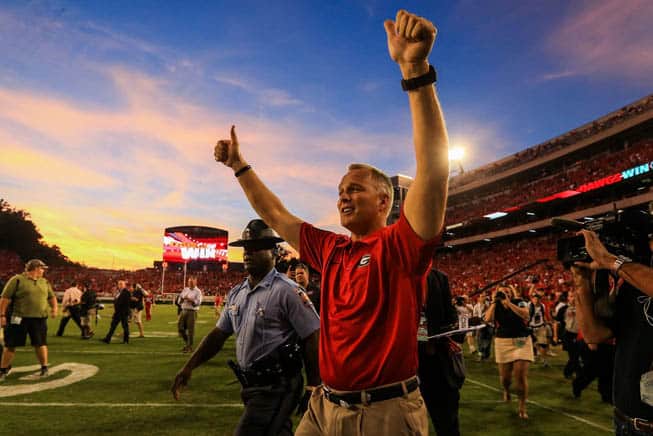 After their thrilling 44-41 victory over then No. 6 LSU, the Georgia Bulldogs have moved up to No. 6 in both the AP Poll and the USA TODAY Sports Coaches Poll for Week 6.

Georgia was previously ranked 9th in the AP Poll and 10th in the Coaches Poll. The Bulldogs jumped over Florida State and Louisville in both polls and Texas A&M in the Coaches.

The Top 5 in both polls remained the same. In the AP, Alabama is No. 1, followed by Oregon, Clemson, Ohio State, and Stanford. The Coaches Poll is the same except for Ohio State is third and Clemson is fourth.

It sue seems Alabama and Oregon are in a class by themselves, with a big gap back to the third team. So the current BCS system will be fine this year. Everyone but me seems to like next year’s 4-team playoff. If it were in effect this year I think there would be a huge fight over the 3rd and 4th teams and will be most years.

WHO does ALABAMA play to warrant a top seed in the country??? Georgia has played three top ten teams this season. Alabama?LSU is the only top 25 team left on their schedule!!!

Don’t worry angry Dawg, if you beat Florida then you’ll have your chance at Bama in the SEC CG. Sometimes I worry if we’re doing well. Then I read a random angry comment and I realize that the Tide Rolls! Also, it doesn’t help your argument about a tough schedule if you lose to Clemson.

Props to Aaron Murray and the Dogs, out lasting the Tigers. Can either Georgia or LSU put up that many points on the Tide?