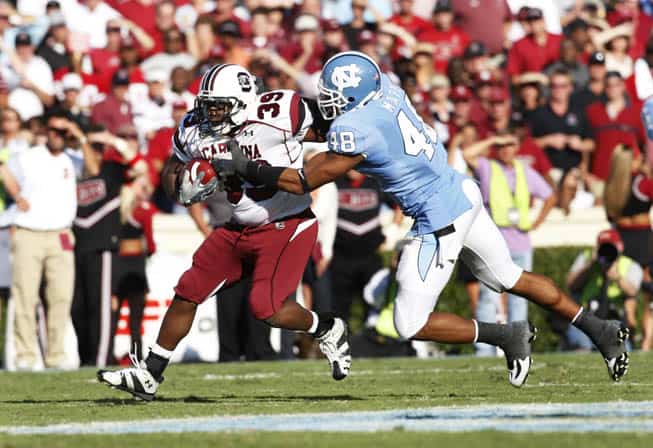 The Gamecocks and Tar Heels will open the '15 season in Charlotte. (Bob Donnan-USA TODAY Sports)

The North Carolina Tar Heels and the South Carolina Gamecocks will open the 2015 season at Bank of America Stadium in Charlotte, it was officially announced this morning.

The game will be played on Saturday, Sept. 5, 2015. The Charlotte Observer first reported news of the future match-up on Tuesday.

“We are extremely excited to bring these national football powers and regional rivals together in Charlotte for college football,” said Will Webb, Executive Director of the Charlotte Sports Foundation. “Both North Carolina and South Carolina have a strong alumni presence in the region. This will be a tremendous game featuring a marquee matchup of ACC and SEC teams. We look forward to hosting the Tar Heel and Gamecock teams and fans in Charlotte.”

South Carolina will be the “home” team after USC Athletics Director Ray Tanner won a coin toss at the news conference this morning.

The two schools will face off this season on Thursday, Aug. 29 at Williams-Brice Stadium in Columbia. It will be the first time the Tar Heels have visited the Gamecocks since 1990.

North Carolina now has their first announced non-conference opponent for the 2015 season.

The Gamecocks already had four non-conference games scheduled in 2015.  A game at East Carolina was scheduled as their season opener on Sept. 5, but it will be moved to another season. South Carolina is also slated to host UCF (Sept. 26), The Citadel (Nov. 21), and Clemson (Nov. 28).