Fresno State to Play at Washington in 2017 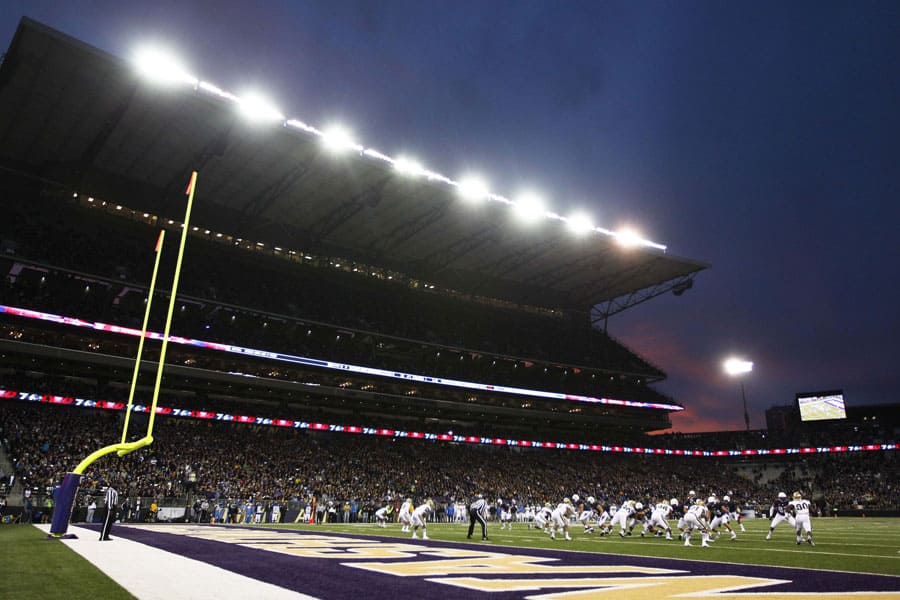 The Fresno State Bulldogs will play at the Washington Huskies in 2017, Fresno State Director of Athletics Jim Bartko announced Monday.

Fresno State will make the trip to Husky Stadium in Seattle on Sept. 16, 2017. The game will be the fourth overall meeting between the two schools and fourth in Seattle. UW leads the series 2-1.

“This is a great opportunity for us to stay on the west coast and play a highly competitive Pac-12 program,” Bartko said. “This game will provide us with great exposure and is an easy trip for both our team and our fans to get to and from Seattle.”

The addition of the trip to Washington gives Fresno State three of their four-non-conference games for the 2017 season. The Bulldogs are also slated to host Incarnate Word on Sept. 2 and BYU on Nov. 4.

Fresno State has the option to play five non-conference games in 2017 as they are scheduled to visit Hawaii that season.

MWC games for Fresno State in 2017 include Boise State, Nevada, New Mexico, and UNLV at home and Hawaii, San Diego State, San Jose State, and Wyoming on the road.

The Washington Huskies have now completed their non-conference schedule in 2017. UW opens the season at Rutgers on Sept. 2 and then hosts Montana on Sept. 9 before taking on Fresno State.

Just another non Power 5 team for the Huskies who don’t have a name Power 5 opponent until Michigan in 2020. Scoot Woodward wants 7 home games every year-quality is of no importance and as a result the Huskies only have 4 power 5 non leagues in the next 7 seasons with 2 of them being unexciting Rutgers.

The lack of posts from Husky fans show just how unexcited they are with AD Woodward ‘s passion for Big Sky and mid level Mountain West teams.

Dave, you may be a little harsh on the Washington program. Yes, it doesn’t look strong 3 of the next 7 years, but for most all the years leading up to this span you have mentioned UW has one of the most complete non-conference schedules played, playing 1 or 2 P5 programs every year and both home and away. Could only imagine if an average SEC school would take on a typical schedule the Huskies have. Agree, not to exciting, but their history for the most part is solid.

Sorry to disagree, but when you spend 250 million for atop notch stadium, hire away one of the top coaches in the country, one would expect more than a Big Sky dominated schedule with a smattering of Mountain West teams and a Power 5 (Rutgers) in name only, there is nothing to get excited about- but when a single home game against BYU in 2018 is the only moderately interesting non league game until 2020′ then I think the criticism is just. Just because they had quality non league schedules in the past is no reason to go over board and give us 1-2 cupcakes everyone year and only a medium second tier team like Rutgers as your top OOC is an insult to their fan base.

Sad reality is that the Pac-12’s use of the 9 game conference schedule replaces the need of having an elite non-conference game. Why disadvantage yourself even further against other conferences using an 8 game schedule. If you happen to win enough… the Pac-12 championship game “fills in” as your elite game. Funny thing is last year Chris Petersen voted against power5 teams playing against group of 5 teams. Woodward has been scheduling opposite of that viewpoint. Either way Huskies just need to focus on winning games… no matter who’s on the schedule. And yes, I am a Husky fan.

I think UW should just schedule both Boise and BYU yearly, or a 2 year on 1 off deal. I surmise both of those schools would love it and mutually beneficial for all three. Then just add in a usually mid-tear team P5 squad like Rutgers this season or Illinois like last year. They drew over 62K for their games vs. Eastern Washington and Illinois. Not sellouts, but with Boise or BYU in town the attendance will get a bump.

Being that BYU and Boise are the best two regional draws they have, it is a pretty shrewd move. so on most years their schedule will look like:

That’s a pretty commendable non-con slate. Hands down better than the one “neutral site” match up the first week of the season and then two or three body bag games model so many other schools employ.

In off years maybe try to schedule an Oklahoma or another Big12 upper tier team or Iowa or Nebraska along with the BYU/Boise combo.

Then C.P. just needs to win that PAC-North and get the ball rolling.

That would be nice, but it will never happen. Even tough Washington’s stadium is twice the size of Boise State’s, Boise no longer schedule 1 and done or 2 away 1 home game schedules with larger schools with bigger stadiums. The UW has never gotten BYU to do more that home & home schedules, although BYU has done that with other PAC12 schools like USC and Stanford and of course Notre Dame.

What the Huskies need to do is stop aggressively scheduling Big Sky and other FCS opponents like they have done lately. My gosh they have 10 games scheduled between 2014-2021 with the havenots from the Big Sky and Big Sky equivalent Idaho. No wonder there are so many unsold tickets and noshows for those games. Just look at the Georgia State game last year, 10,000 unsold tickets and another 10,000 plus in no shows.

On the other end of the spectrum, BYU and Washington State have played 4 times and never in Pullman.

No, Dave I meant do a home and home for two years and then take a season or two off and reschedule another homer and home, and then like you said try to slip in a ND or BIG 10 or 12 team. I just think it behooves UW and Boise and BYU to always be playing one another.