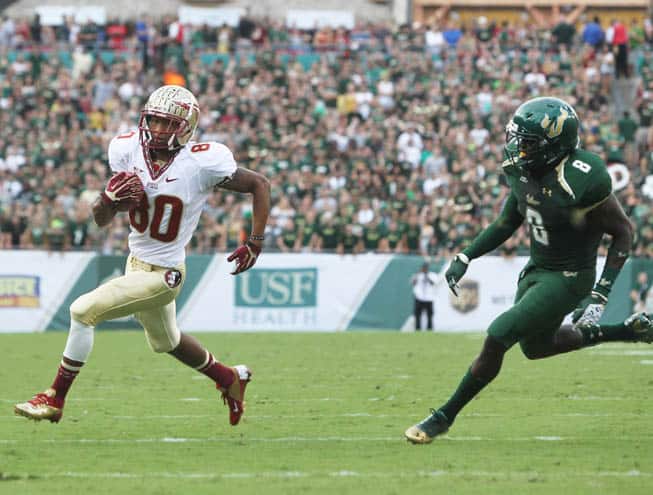 The Florida State Seminoles and the USF Bulls have scheduled a home-and-home football series for 2015 and 2016, the two schools announced today.

Florida State will host USF at Doak Campbell Stadium in Tallahassee on Sept. 26, 2015. The Seminoles will then travel to face the Bulls at Raymond James Stadium in Tampa on Sept. 24, 2016.

The overall series between the two schools is even at one game each after the Seminoles beat the Bulls 30-17 in Tampa last season. In their first ever meeting in 2009, USF upset Florida State 17-7 in Tallahassee.

“We are excited to add USF back to our schedule for the 2015 and 2016 seasons,” said Florida State Director of Athletics Randy Spetman. “For all the Seminole fans throughout Central Florida, this is a great opportunity to once again see their team play in an NFL facility. The last time we played in Raymond James versus USF the atmosphere was excellent and the excitement generated among our fan base was unmatched.”

“We’ve been working collaboratively on extending the series between USF and FSU for some time,” USF Director of Athletics Doug Woolard said. “The two previous games provided such great atmospheres for both of our fan bases that it was important for us to extend the series. Combined with our recent non-conference scheduling announcements, we’re very pleased with how our future schedules have come together.”

USF previously announced four games for the 2015 season, and now they have five, which is one too many. The Bulls are currently slated to open the season at home vs. Florida A&M (Sept. 5), host Indiana (Sept. 12), visit Maryland (Sept. 19), and travel to Nevada (Oct. 3).

Obviously, one of the four previously scheduled games will be moved to a new season or canceled. Greg Auman of the Tampa Bay Times reports that the game to be moved is Nevada.

Great for both Teams.