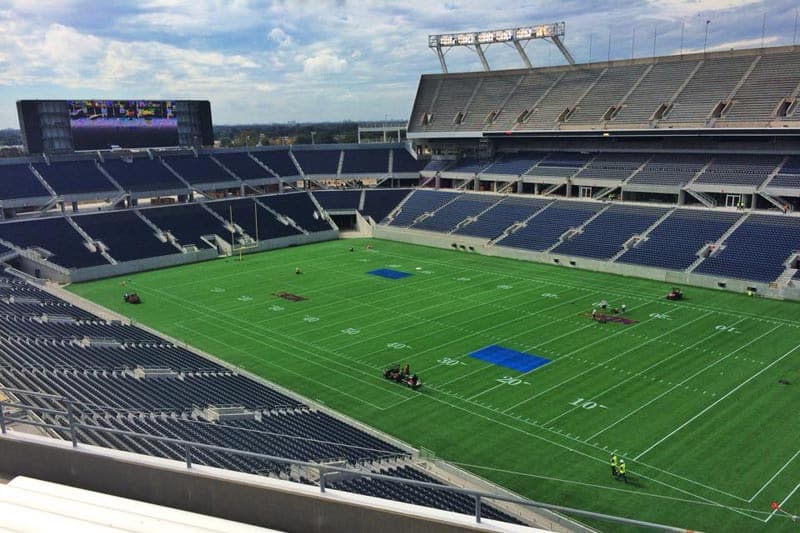 The FSU-Ole Miss matchup, which was initially reported by ESPN last week, will take place on Monday, Sept. 5, 2016 (Labor Day) and will be televised nationally by ESPN.

“We’re excited to bring regular season neutral-site college football games back to the Citrus Bowl and establish Orlando as a major kickoff destination for the future,” said Florida Citrus Sports CEO Steve Hogan. “Florida State and Ole Miss will undoubtedly be a game worthy of national attention and we can’t wait to welcome fans from Tallahassee and Oxford to Central Florida to start the 2016 season.”

The game will be played at the newly renovated Orlando Citrus Bowl Stadium, which made it’s debut this morning. The stadium now has a capacity of 61,348 and is expandable to 65,194.

“We are pleased to be able to play again in the Orlando Citrus Bowl and look forward to seeing the changes in the venue,” said FSU Athletic Director Stan Wilcox. “We have a large base of fans and alumni in Central and South Florida who travel to all our home games, and we have been looking to play some games that might require less travel for our fans around the state. The new College Football Playoff has placed a renewed focus on quality non-conference games. I know it will be a game that will excite both fan bases and one that will draw a great deal of national attention.”

Ole Miss has never played a regular or post-season football game in Orlando. It will be the first regular-season appearance in the city by a team from the SEC since September 28, 1991, when Florida defeated Mississippi State, 29-7.

“Kicking off 2016 with Monday night football is a big thrill for our program, and this is a great game on many levels,” said Ole Miss Director of Athletics Ross Bjork.” “Florida State is one of the traditional powerhouses of college football, and with the evolution of the college football playoff, matchups that provide a boost to our strength of schedule are a priority for us. Orlando is a destination city, and I know Rebel Nation will respond in a big way to provide a bowl game like atmosphere to kick off the season. We appreciate our partnerships with ESPN and Florida Citrus Sports to make this featured game a reality.”

Florida State and Ole Miss have only met once on the gridiron. The Rebels defeated the Seminoles in that game, 33-0 in Oxford in 1961.

Good to see Missi schedule a credible OOC opponent. Still waiting to hear what Missi St pulls out of their hat for 2016.

You gotta love those neutral site games, avoiding (the risk of) playing a true road game.

Ole Miss is good? Right. They are a annual cellar dweller who had slightlyl above average year, they will revert to their mean. Btw, they played 4 easy OOC’s..No P5’s . In fact, they have 1 good win bama…an upset that happens one in a while, they lost to LSU who is 7-4, lost to Aub 8-3, just lost to Ark 6-5 30 to 0. Teams currently ranked in the CFP top 25 they have 1 win and 2 losses and a loss to ark.

To soup: “annual cellar dwellar” what an idiot. Back-to-back 9-3 seasons (11-5) isn’t too bad is it. Oh and just to remind you, “an upset that happens once in awhile”. I think ole miss has earned the title of a “good team”

Well…I do believe Ole MS beat a Boise State this year who had a pretty good year. Ole Miss has played Texas as an OOC the two years before and beat two ACC teams in bowls games in 202 and 2013. The past three season Fl. St has scheduled Bethune-Cookman, Idaho, Nevada, Murray State, Savannah State and the Citadel and had a bowl game against Northern Ill, not even against a Power 5, how pathetic. Somehow, you think you have room to talk?

Schoup you sounds like someone that hates the SEC I think you need to worry about your own team and conference. If you are truly a college football fan you need to start giving the SEC the expect a they deserve for all the great things they have brought and will continue to bring to the game college football!!!!

Sorry rebels about the gae tonight good luck on the next one. Hotty toddy