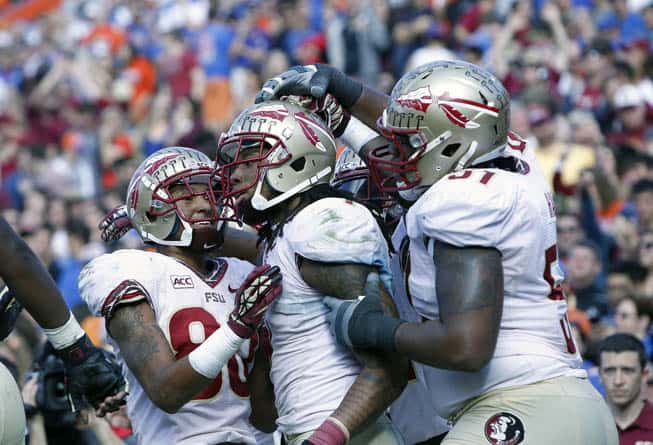 The Florida State Seminoles are the new top-ranked team in college football. The Ohio State Buckeyes are right behind them in 2nd place of the Week 15 BCS Standings.

Sitting in fifth place are the Missouri Tigers, which will face Auburn in the SEC Championship Game this weekend. The winner of that game could find themselves in the BCS National Championship Game if either Florida State or Ohio State lose, or if they work they way up in the standings.

Florida State takes on Duke in the ACC Championship game and is expected to win. Ohio State has a tougher match-up in no. 10 Michigan State.

Clemson dropped from 6th to 13th after falling at South Carolina 31-17. The win moved the Gamecocks up two spots to no. 8.

Northern Illinois sits at no. 14 and is in good position to claim an at-large berth to a BCS game. That could change, however, if the Huskies lose to Bowling Green in the MAC Championship Game.

Listed below are the complete Week 15 rankings.

So if you have seen the BCS Standings on http://www.espn.com, then you can find the message, that is are the final standings in 2013: ;-)

So then we will have the following BCS Games:

Alabama is guaranteed a BCS bid as long as they remain top 4.

Good, ESPN has watched this blog, and changed their BCS Standings back to Week 15. Everything is possible, although that Duke and Louisville will reach the BCS Bowls.