Florida State in talks for Neutral-Site Football Game in Orlando in 2016, Atlanta in 2018 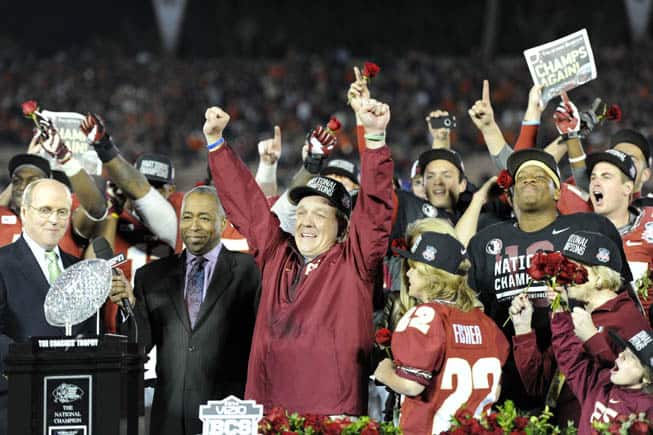 The Florida State Seminoles are in preliminary talks to play neutral-site football games in Orlando in 2016 and Atlanta in 2018, David Hale of ESPN has reported.

According to Hale, no discussion of opponents for either game has taken place.

The two neutral-site game possibilities came to light in a Q&A with FSU athletic director Stan Wilcox. Here is the section on football scheduling:

Hale: One of the big knocks on FSU last season was its strength of schedule. That’s come even more to the forefront as college football’s playoff system begins in 2014, and it’s a topic the ACC is debating, too. What’s the discussions regarding conference scheduling, and where does Florida State stand in the debate?

Wilcox: We’re still in conversations with that, but what I would say is that as a league, we’re trying to do what’s best to position the league so that we can get teams into the playoff. If you can get more than one — like this year, we got more than one team in the BCS — that’s even better. There are conferences that have already decided how they think they’re going to do that. They’re going to nine games. We’re contemplating and discussing what’s going to be the best way, just like the SEC is doing. Each league is considering how best to position the conference from a scheduling perspective without compromising the regular season and the rivalries that have been established. You also want to make sure you have the right inventory you can sell to networks and sell to create channels. And from the ACC perspective, nothing has been decided yet.

From [Florida State’s] perspective, we’re at the point now that we would like to continue to be able to have as many quality home games as we can, potentially take one of those games on the road — this year, we’re going to Dallas, and we’re looking at Orlando and other cities.* Some of that can be jeopardized depending how the conference ends up. If we had our druthers, we’d like to just keep everything the way they are right now. But I can’t say that’s what’s going to happen.

Florida State currently only has two non-conference games scheduled in 2016 (at USF, vs. Florida) and one in 2018 (vs. Florida). It’s no coincidence that the Seminoles would prefer to play a neutral-site game in years that they host the rival Gators in Tallahassee.

So who could the Seminoles play? One or both of the games is likely to be against a team from the SEC, and the first team that comes to mind is Georgia.

Last May, then FSU athletic director Randy Spetman mentioned that he was talking with Georgia about playing in 2016. At that time, he said that talks between the two schools were “moving along” and that the game would be played at the Georgia Dome in Atlanta.

UGA athletic director Greg McGarity likely held up those conversations because he’s waiting on his own conference to hash out their future football scheduling format.

If the dates and locations hold true, FSU will play in the renovated Citrus Bowl and the new Atlanta stadium. The Citrus Bowl in Orlando is currently undergoing a huge renovation project and is expected to be completed by November of this year.

Atlanta’s new retractable-roof football stadium, which will replace the Georgia Dome, is expected to open in time for the 2017 football season.

How about a FSU vs Tennessee rematch in the Chick-fil-a kickoff game.

They have to play another SEC team since everybody all are all on their nuts. Bama, GA, or Auburn would be great. I’d like to see them play those teams even and even over rated Oregon or Stanford.

I wish Florida and Miami would do a Orlando game in the remodeled Citrus Bowl, actually I wish they would do a home-away series, but thats not going to happen since Florida doesn’t want to give up the home game. I can see why they make a lot of money, but I think they could shop this series to ESPN and get enough money to play they series.

One team or the other will be designated the home team. If it is Miami, ESPN already owns the rights under the ACC deal. If it is Florida, CBS has first dibs and if they pass because another game looks better that day; it goes to the ESPN package ESPN already negotiated with the SEC.

Ha! I bet they are

Alabama could be an opponent, given the Jimbo Fisher-Saban connection. Either way, more big games, better for CFB.

Lsu,oregon,bama,Michigan or the suck eyes

Michigan…. Since they never gave us our home game after we beat them in the big house in 1991.

Florida State-LSU would be a good matchup, as well.

The cities mentioned point to FSU-UGa; but Alabama, Auburn or LSU would be awesome opponents. All are top notch programs, with outstanding fans.

The FSU 2015 schedule is an absolute joke and should nullify them from and playoff possibilities.

Your a joke bruh

FSU vs GEORGIA in Atlanta and FSU vs Alabama in Orlando

I don’t understand people asking for Michigan ??? That program is a joke. Michigan State would be a great match-up.

Michigan is a joke? We went to our bowl game and obliterated your nemesis. I have an idea, why don’t you send The NOles up to Ann Arbor in November for a nice fall football game….or have a late December/early January bowl matchup In Michigan with you soft florida babies…That would be something. It sure would be more entertaining than watching Fla St get spanked by Houston.

We will. Play anyone