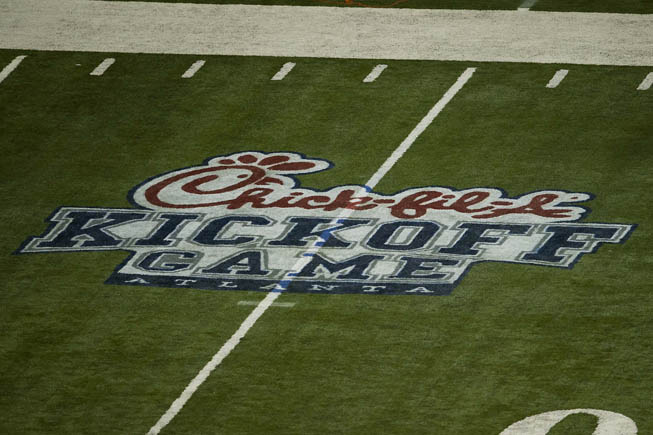 Florida State and Georgia could meet in Atlanta in 2016. (Paul Abell-USA TODAY Sports)

The Florida State Seminoles and the Georgia Bulldogs could face off in the 2016 Chick-fil-A Kickoff Game, according to a report by The Orlando Sentinel.

FSU athletics director Randy Spetman first revealed that he was talking with Georgia about a future football match-up at FSU’s Spring game in April.

But at the ACC Spring meetings today, Spetman told the Sentinel that talks between the two schools about meeting in a neutral-site game in 2016 are “moving along.” He also said that the game would be played at the Georgia Dome in Atlanta, which means it would likely be a Chick-fil-A Kickoff Game.

“The AD at Georgia (Greg McGarity) just doesn’t know if he has room to put it in there,” Spetman said.

McGarity has gone on record on numerous occasions recently that he is waiting on the SEC to decide on a future scheduling format before he resumes adding non-conference games.

The SEC is set to discuss a potential nine-game conference football schedule at the Spring meetings in Destin later this month. That conversation, which will likely be heated, has Georgia and other schools in a future schedule holding pattern.

Georgia currently has only two non-conference games lined up for the 2016 season – Georgia Southern (Nov. 19) and Georgia Tech (Nov. 26), both home games. So they have two openings under an eight-game schedule and one with nine games.

Even though a nine-game schedule still affords Georgia an opening, it could alter how many home games they have that season. And Georgia, like most other BCS schools, wants seven home games for financial reasons.

The Seminoles are in a better position as far as knowing their schedule setup that season. At the ACC Spring meetings today, coaches have “unanimously” agreed to keep an eight-game conference schedule because, to some, Notre Dame is the “de facto” ninth game in some years.

Georgia and Florida State last met in the 2003 Nokia Sugar Bowl. The Bulldogs won that game 26-13 and extended their lead in the overall series to 6-4-1.

Georgia will NOT play in this game again any time soon. After they got blown out by Boise St.
They will play some cupcake at home the first game as always …….scared !!!!!!

When was the last time your precious jackets played a big game on the road mr GT bob? You have lost to middle tenn state and byu at home, and lost to us 11 out of the last 12 years shut your face!

GT Bob has his head in the hive! He does not really know what he speaks about pertaining to Football or who the Dawgs play.

You DO know these schedules are made years in advance, right???

uga is scared of the indian from florida state

Georgia beat Florida State in the Sugar Bowl the last time they met up with each other..Bobby was their coach at the time still…We’ll be glad to do it again….Go DAWGS!!!!