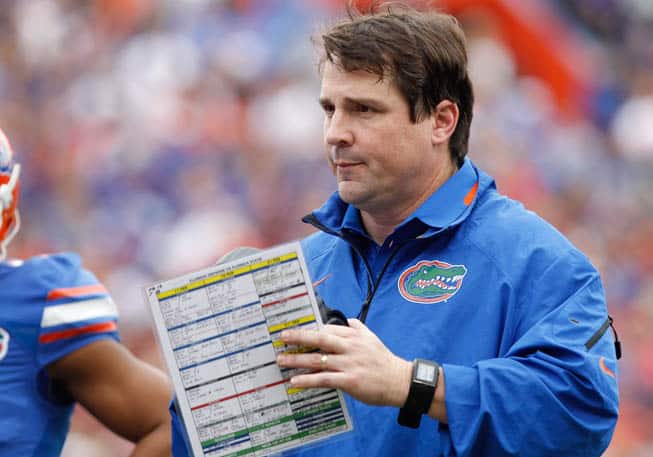 The SEC Spring meetings began today in Destin, Florida, and football scheduling is once again at the forefront of the discussion.

With the 8-game football schedule format and the future cross-division rotating games already announced, you would think there wouldn’t be any scheduling issues to discuss. But evidently there is.

Florida head coach Will Muschamp said today that the Gators will “move forward” without playing any more FCS schools.

Muschamp’s reasoning for discontinuing games against FCS schools is that “the fan base wants to see better opponents.” That’s a good reason, and it’s certainly just a coincidence with the timing.

Last season, then FCS Georgia Southern went into The Swamp and upset the Gators 26-20. It was Florida’s first-ever loss to a lower division opponent.

Georgia Southern is moving up to the FBS and will officially join the Sun Belt Conference on July 1, 2014.

Florida is currently scheduled to host Eastern Kentucky this season on Nov. 22. But that is the last FCS team on Florida’s future football schedules.

It would be interesting to see some kind of assessment of how a FCS team impacts the SOS calculation vs how an average G5 school would impact it.

In the old BCS format many FCS teams were ranked above many G5 schools. Georgia Southern, Eastern Washington and North Dakota St for example often finished the season ranked in the top 100 of D1.

Well, Georgia Southern did beat Florida (really?) as a FCS school. Maybe Florida should put them on their future schedules, alongside with Miami (FL) and Florida State.

Yeah, Ga. Southern was a fine choice for that “scrimmage” before playing the ‘Noles……maybe instead try Charls. Southern or Presbyterian.

Let’s see Florida play a non conference game on the road outside the State of Florida. W
ould they go to Green Bay to play Wisconsin?

Wisconsin is complete and utter garbage. You will grow a brain before they win anything that matters

The Red Sea has evidently parted. Just make sure to schedule some home and aways outside of the state of florida (no neutral fields) because why should a power program be scared to play anybody. 1 Mac & 1 Sun Belt, Florida State (home/away) & Power 5 (away/home). Maybe send a challenge to Notre Dame and see if they have the balls to play in the Swamp. That would be amazing for college football. Make it happen.

I respect the Gators for this decision. I am a lifelong Tennessee fan and i feel, if Florida can schedule year in year out without FCS teams, the Vols and every other SEC team could do so as well.

Way to go Florida for stepping up and doing the right thing!

Did you really say “since moving up to Division I in 1973”? Really?

Yeah, that was a typo.

Yeah heaven forbid uf should play home and home against state schools that have a combined 8 titles since 1981. Another Internet retard weighs in.

Why has the part of this story about, Georgia, LSU, SC, Ole Miss etc planning to continue to schedule FCS been deleted? Les Miles, Mark Richt etc are all in favor of scheduling FCS teams which I applaud!! Share the wealth.

There was nothing in this article about Georgia, LSU, SC, Ole Miss, etc. You probably saw this article which was posted shortly after:

Let’s be honest, this was the real reason Muschamp was fired. The SEC only wants weak out of conference games. Muschamp’s record had nothing to do with it.