Florida and Miami have no plans for future football series 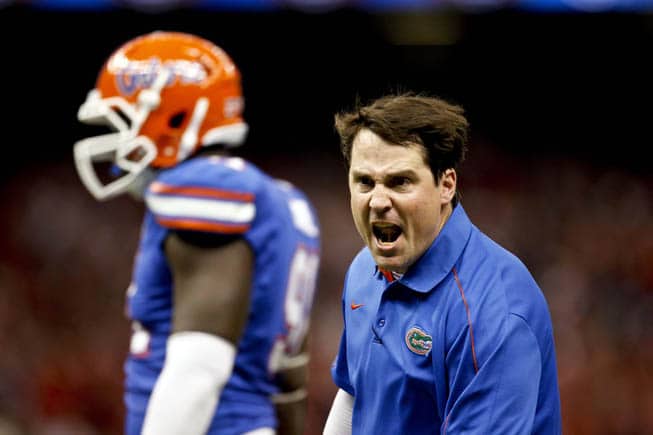 On September 7, 2013, the Florida Gators will travel to take on the Miami Hurricanes. It will be the first time Florida has played at Miami since a 38-33 loss back in 2003.

The last meeting between these two schools was in Gainesville in 2008, which the Gators won 26-3.

This year’s meeting will also be the last for the foreseeable future as Florida and Miami have no future games scheduled and have not had any discussions for a series.

“I haven’t spoken with Jeremy (Foley) or the University of Florida about future games and I don’t know how it would fit into their schedule or fit into ours right now. There hasn’t been any conversation and there isn’t anything on the schedule for the future” Miami athletic director Blakes James told ESPN back in May.

Florida and Miami began playing in 1938 and met each season through 1987. Since then, the two have only squared off five times and two of those were in bowl games.

Fans would love to see Florida and Miami meet annually. Heck, this year’s allotment of single-game tickets is already sold out! But an annual game with Miami just isn’t feasible for Florida for a couple of reasons.

First, the Gators play their biggest rival, Florida State, in an annual non-conference game that alternates home sites each year. Second, they play conference rival Georgia every season in Jacksonville.

In even years, Florida travels to Tallahassee to play FSU. That leaves them with seven possible home games since four SEC games are on the road (including the Georgia game in Jacksonville).

In odd years, the Gators only get three SEC games at Ben Hill Griffin Stadium since they are considered the “home” team in Jacksonville. That again leaves them with the possibility of having a maximum of seven games at home.

But when they step outside the box and agree to a game at Miami, they get what should be considered an anomaly for their 2013 schedule — only six home games.

With the SEC considering a move to a nine-game conference schedule and teams trying to tweak their schedules for the upcoming College Football Playoff era, the possibility of a regular Florida-Miami game looks dimmer by the day.

“You never say never, but that’s not high on the agenda right now,” Foley said. “You’ve got too many other issues. For me to sit here and say we’ll do that right now down the road, there’s too many unknowns with scheduling right now.

“If you’re at nine conference games, plus Florida State, I’d probably tell you it’s really unlikely. But there has been no discussion between us and the University of Miami. Again, I have great respect for the Miami total athletic program, but that’s just something that is not high on the list right now.”

What a joke. There’s no excuse for Florida and Miami not to play each other every single season. What, do these teams not want to bump their annual FCS opponent off the schedule? Too many teams these days schedule garbage opponents because they’re scared of losing. Games like Florida vs. Miami make college football better. Period.

It is called money to run the program. Florida will sell out every home game and they need 7 home games to make the maximum profit to run an SEC program. A game at Miami instead of a home game probably costs Florida 2 to 3 millions in lost revenue.

Here is the excuse for not playing the Hurricanes every single season – Because they screw the fans. Guess how many tickets were sold through the UM ticket office to the general public for this September’s UM-UF game – Zero tickets, none, nada. Yesterday there were over 7600 tickets for re-sale on Stub Hub alone. With all the re-sale sites together and Ebay, there were over 25,000 ticket offered for re-sale. Basically, the UM ticket office gave a select few insiders the opportunity to profit by selling tickets for 7 times face value. I spoke to the UM ticket office Friday and they said I could get a UM-UF ticket if I spent $140 on a season ticket for lousy seats. Seats in this SAME section are $140 on Stub Hub for the UF-UM game alone. The market is saying that all other home games on the UM schedule are pretty much worthless.

I love the Canes and I agree with you completely. That is awful they are screwing their own fans with the sites like stubhub and a select few selling their tickets are such high prices. Very strange, I would think the VT game is still big in Miami but not nearly the caliber of a game with the Gators. Regardless of this issue, this game on Sept 7th should be very close and very exciting!!

your post makes little sense. Florida doesn’t base their decision around how Miami distributes their tickets for a Miami home game. Miami is doing what they think is best for their school. They are not obligated to sell single game tickets. If tickets to the game are worth $140 to you, then buy the season ticket package. If its not worth $140 to you to go that game, then don’t go to the game.

Palm Beach—–How is it screwing the fans by offering tickets at a price that some are willing to pay and others aren’t? Does a restaurant that charges 90 dollars for a steal “screw it’s customers” because the Denny’s down the block has a $9.99 special.

If you don’t think the price to a big game like UF-UM is worth it stay home. Or go see a Division III game. I think the last one I went to cost me five bucks to get in, and even with sodas, hot dogs and parking it was less than 20 bucks for my girlfriend and I to enjoy a day at a game.

I don’t think it’s right to purportedly offer tickets for sale through a, y’know, TICKET OFFICE but in practice only offer them at mark-up prices through third parties.

If you went to Denny’s for a steak but got told you had to go Delmonico’s and pay $90 for the actual finished product (which was still Denny’s quality), would that be okay? What this StubHub/scalping act is doing is not remotely comparable to simply setting a price and letting the market/demand dictate its worth.

at Pete – Miami doesn’t control the stub hub third party stuff. Miami has made a decision that they are going to use their best product (the UF game) to try to drive sales and interest in the rest of their product (the other games) and that they will do so by offering no single game sales to the UF game. Once someone buys the season ticket package or receives a ticket through some other special means, Miami has no control over what they do with their ticket to the UF game. If you are a UF fan who will except for UF-UM games never attend a UM game, then you are a really low priority to them when it comes to their business model.

I understand what you are saying. My (personal) issue is to reward individuals who pay face value for a ticket and have no interest in the game other than to resell the ticket for a profit.

at Palm Beach County Gator – you’re not exactly showing great intelligence by assuming that the professionals over in the UM ticket office haven’t researched the various possible scenarios and that their superiors in the multi-million dollar athletic department haven’t thoroughly reviewed the decision. You seem to be upset because the UM office is not catering to Florida fans. They have made a conscious decision not to do so and instead have tried to use this big game to lure new Miami fans or to get Miami fans more involved. but that is cool that the UF has agreed to this game because its much more interesting for us neutrals than UF or UM vs. an FCS school is.

Shame, would have like to see this series played regular with all the talk of schedules being upgrade because of the playoffs. Well lets see and hope that ESPN puts some money on the table and get this series going again. Maybe play it in Orlando (Citrus Bowl) / Tampa Bay (Ray Jay) like the Florida-Georgia series?

gators are chickens, always have been always will be PROVE ME WRONG

In other words Florida is only going to schedule one OOC game away from home, Florida St, and they will now definitely never leave the state for a ooc game. And that means they’ll probably never play a decent team from a AQ conference; not that that is news, since 1991 or so the only other AQ teams they’ve played have been Florida St, Miami and one game against South Florida.

“But when they step outside the box and agree to a game at Miami, they get what should be considered an anomaly for their 2013 schedule — only six home games.”
Some other AQ teams actually do have seasons in which they only play 6 home games.
USC routinely only plays 6 or 7 home games, travels out of state for 1 ooc game, sometimes 2. Yet UF can’t do either for over 20 years.

Maybe Florida, FSU, and Miami could work out a way so that they each play one of the other 2 at home, then the other 1 on the road. It would still be tough though.