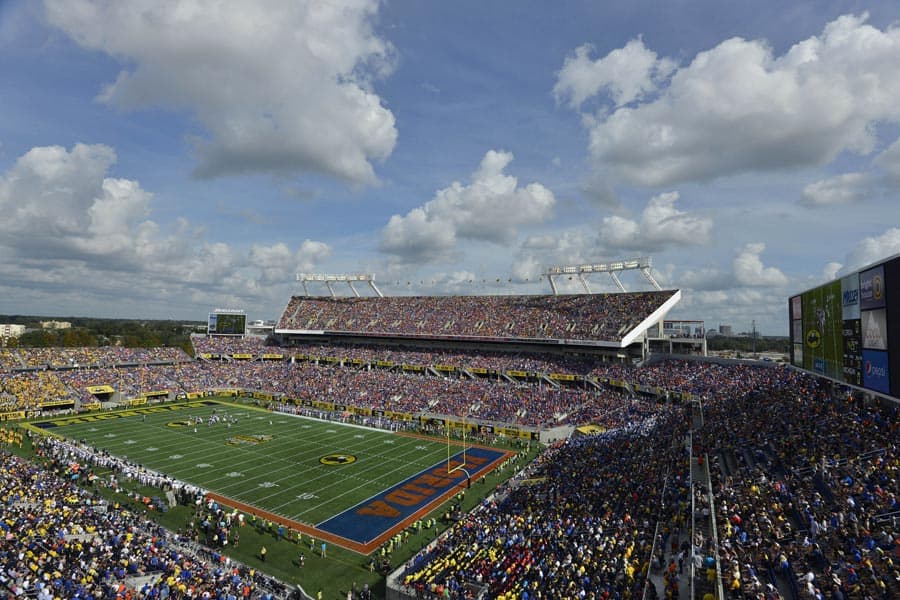 The Florida Gators and the Miami Hurricanes have finalized an agreement to open the 2019 season in the Camping World Kickoff game in Orlando, FCSports announced today.

“Florida Citrus Sports is proud to announce yet another big-time college football game for Orlando,” said FCSports Chief Executive Officer Steve Hogan. “We’re excited to pair two in-state teams for a match-up with tremendous appeal locally and nationally at the top of the 2019 season.”

The two schools will meet at Camping World Stadium in Orlando, Florida, which was previously known as Citrus Bowl Stadium. A date was not indicated, but it will likely be Saturday, Aug. 31 or Monday, Sept. 2, 2019.

Florida-Miami is now the third Camping World Kickoff game on the future docket. Camping World Stadium will host Florida State-Ole Miss on Monday, Sept. 5, 2016 and Alabama-Louisville on Saturday, Sept. 1 2018. A match-up for the 2017 season has yet to be announced.

Florida and Miami have met 56 times on the gridiron and the Hurricanes lead the series 29-26. In their last meeting in Miami in 2013, Miami defeated Florida 21-16.

The Florida Gators now have two neutral-site matchups on their future schedules. UF is also scheduled to open the 2017 season against Michigan at AT&T Stadium in Arlington, Texas.

“We are pleased to have partnered with Florida Citrus Sports and ESPN Events to kick off the 2019 season against Miami,” Florida Athletic Director Jeremy Foley said via a release. “Orlando is a great Gator city and we look forward to playing in front of our fans from all over the state of Florida and beyond.”

Miami also has one other neutral-site game on their future schedule. The Hurricanes are set to face LSU in 2018, also in Arlington.

“We are excited to have this opportunity to play the University of Florida in Orlando,” said Miami Director of Athletics Blake James. “There have been so many memorable games between our two institutions and I am confident that all of our alumni and fans will enjoy seeing the two teams square off in the Citrus Bowl. I would like to thank Steve Hogan and Florida Citrus Sports, ESPN events and our game sponsor, Camping World for making this game a reality.”

Oh goodness, here we go, another SEC team opens up with a Cupcake Game.
Ok lets hear you numb nuts go on about the easy schedule Fl plays.

lol…..no, they will complain about how Florida never leaves the state meanwhile they play in Texas next year.

Well in 2017 and 2019 Florida will be doing something sort of rare for an SEC team. That would be playing 2 OOC games with P5 teams. Good for Florida.

FWIW, the Gators haven’t played an OOC regular season games outside the state of Florida in 25 seasons. In 1991, they played Syracuse in NY, lost, and it cost them an undefeated regular season, a likely shot at a national championship, and it absolutely demonstrates what kind of advantage it is to never have to travel far for away games. Good for them for never having to leave their state for OOC games, and I get that they have had a tough OOC opponent in Florida for all 25 of those years. But anyone pretending that it’s not an advantage (to never have to leave the state except for SEC games) is joking themselves. Without looking it up, that has to be the longest streak in the country… It’s good to see them play Michigan in Texas, but even with that game, it won’t be a “road game”…so they will still have the longest streak in the country in not playing a true OOC road game…

Congras Orlando! Yet another great neutral site game, they should play this game every year & meet halfway like the the UGA vs UF in Jacksonville.

I’m glad to see them renew the rivalry. It is good for college football when they play. I would like to see them play every year, like they used to do.

when was the last time UF played a non-conference game outside the state of Florida, during the Nixon administration?

It is not that Florida does not leave Florida for it’s OOC schedule, (Not Every BlueBlood Will be Like Ohio State, Oklahoma or Texas and play Home and Home’s). My complaint is that they repeatedly schedule the dregs of the FBS AND and FBS in one season.

Florida could do a 2-1 with USF and/or UCF (and those schools would be willing to have have one huge sell-out) each year to go along with their FSU game at the least.

Since the ACC and the SEC refuse to go to 9 game conference schedules, Miami and Florida should renew their series that ended after the 87 season. Home and Home, like it used to be. If they want to play in Orlando every year, that is okay also.

I think Florid and FSU would be glad to schedule UCF, if UCF would agree to play in Citrus Bowl when they are the home team. UCF has a nice stadium which holds only 45,000. Both FSU and Florida can help UCF fill up the citrus bowl now and than.

Of course UCF and USF can attract good P5 programs to come play home and home series with the respective programs, as teams want to show the flag in Florida for recruiting.UCF has shown they can get series with P5 teams which may never be willing to schedule Florida FSU or Miami such as Texas and Stanford.

Why do so many folks think that the ACC should go to 9 conference games? They already play ND five times each year and Clem, FSU, GT, and Louisville all play annual games against decent SEC opponents and several schools play good teams early in the season in the OOC schedule. There are reasons why that kind of schedule makes sense for the Pac 12 (geography makes it hard to get OOC opponents) and Big 12 (same thing, plus it allows for round robin scheduling). The B1G also has a reason (BTN content) to go to 9 conference games, but there is very little driver for the ACC as long as its members continue these games with the SEC and Notre Dame. FWIW, the ACC played more (conference plus OOC) games against P5 opponents (133) than any other league in 2015. More than the Big ten (127) who also played an 8 game league schedule in 2015.

The average number of games against P5 opponents for all 65 P5 schools was 9.37. That seems like the average number for FSU and Florida over the past decade. Not sure what the problem is here.

Any rumors of who florida plan on scheduling next?