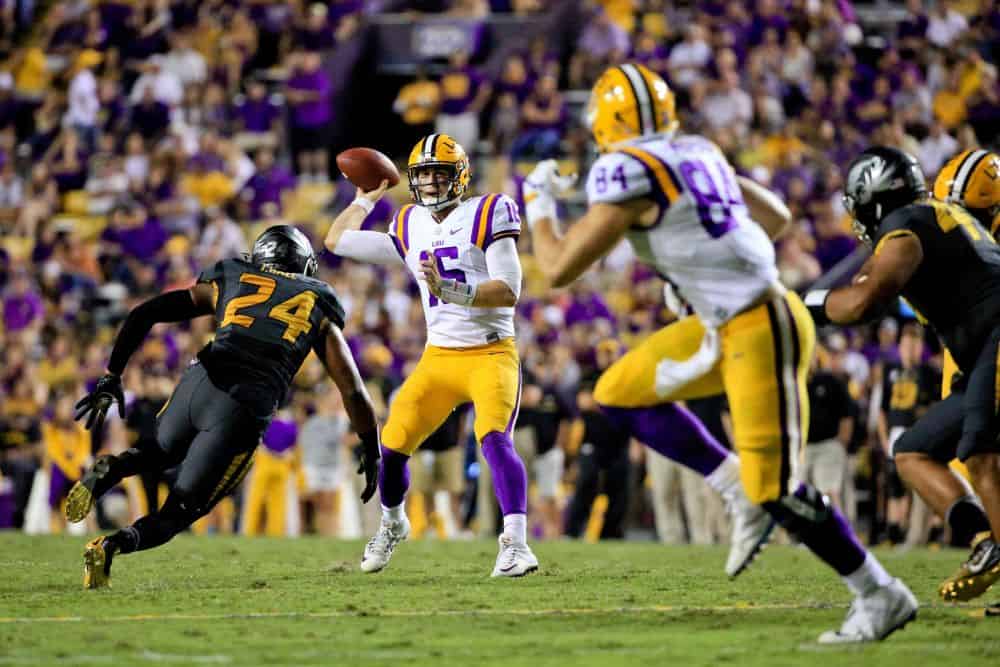 Dellenger also notes that the schools will buy out of their respective non-conference games with Presbyterian and South Alabama. Terms for those buyouts and possible reschedule dates have not been announced at press time.

As LSU will be hosting this season’s game, the 2017 and 2018 games between the teams will be played at Ben Hill Griffin Stadium in Gainesville.

The SEC issued a press release late Thursday about the change, outlining, among other things, the process for rescheduling such affected games in the future. There was a considerable amount of acrimony from national writers and fans of both teams in the days leading up to and following the originally-scheduled date. The release states:

In addition, the Presidents and Chancellors have established the expectation for existing Conference policy to be revised to better define the process for completing postponed or interrupted contests and to grant authority to the Commissioner to determine the date and location of future games that may need to be rescheduled if the two involved institutions cannot mutually identify a date.

Should have moved to 12/1 and SEC title game to 12/8. Why? Because we NEVER see the SEC title game in primetime. Holding it a week later would have allowed the game to be in primetime and have higher ratings without worrying about going against other conference title games. Sure it means delaying the final CFP rankings but it would be worth the sacrifice.

Obviously the SEC believes that ratings are just fine with the game where it is, or it’d already be moved. Not everything has to be in prime time, especially on a Saturday.

Also, I believe the Georgia Dome is unavailable the weekend of 12/8 due to high school football championships.

You can’t just move the SEC Championship game a week later, because one conference Regular Season game had to be rescheduled. There are different factors that play into the Conference title game:
First, the Georgia Dome has to be booked for a date to hold such game in advance (Sat. Dec. 3rd).
Second, CBS which holds rights to broadcast the game on TV, already has it’s television schedule set for Sat. Dec. 10th, including an afternoon game between Army vs.Navy.
Third, people have already bought tickets, hospitality, and transportation for the SEC tittle game.
Forth, moving the SEC title game, would delay College Football Playoff, and bowl game scheduling of matchups. Which would be a huge conflict.
Fifth, do we really want a delayed SEC title game to over shadow the Heisman, and possibly prevent a nominee from attending? The answer is no.
Finally, they are not going to delay the game a week, especially if it’s likely neither team qualifies for the SEC title game.
So while it may seem easy to push the SEC title game a week later, the truth is that it’s not.

All of the people suggesting they just move these pieces around like tokens on a game board must not have ever planned anything in their lives.

It simply isn’t as easy as just picking a different day.

Let’s get on the ball, South Alabama! Invite Presbyterian to come to Mobile and play on 11/19! No reason both schools should sit idle!

They should – already getting paid for the road game and now they have the chance for an additional home game against a fairly subpar team, which may even count towards a bowl considering the unusual circumstances it would be played under.

Just one hurdle – South Alabama has already played an FCS team. I believe to be Bowl eligible, you can only count one win over an FCS team. The NCAA can grant a waiver – which they should as consolation for South Alabama getting the shaft here. I bet South Alabama is waiting for a waiver and then once they get it, they schedule Presbyterian.

I bet they would much rather have the buy-out check and the week off to rest and heal up.

Should have never happened but UF was playing games. Good, we get to have a rested Fournette to kick butt.

Army has 4 bowl eligible wins after they crushed FCS Lafayette today. They will be hard pressed to get 2 more. They scheduled another FCS team – Morgan State on November 19 – which would not count as a bowl eligible win. How about Army buy out Morgan State and replace them with South Alabama. Then Presbyterian and Morgan State – 2 FCS teams – can play.

Will season ticket holders get tickets to this game?

Will season ticket holders get tickets for this game?

LSU season-ticket holders will use the tickets they previously had for the South Alabama game: