Florida-Idaho declared no contest, teams will meet in 2017 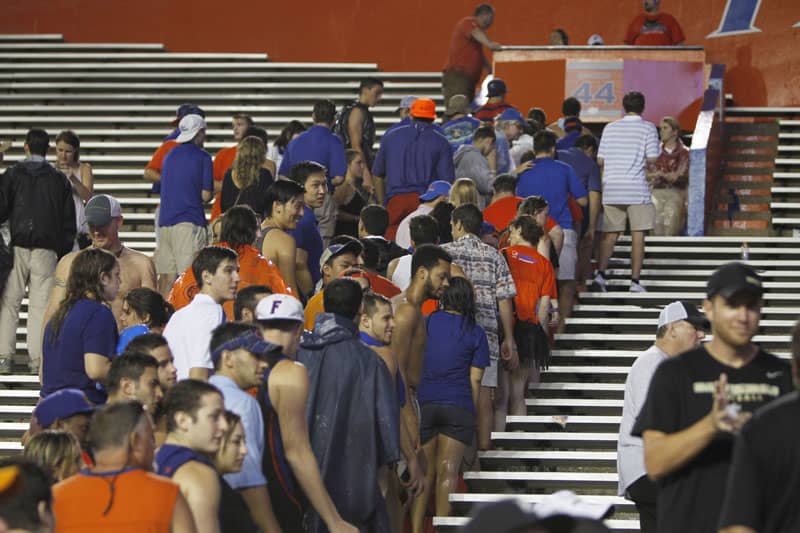 Fans file out after the game was canceled. (Kim Klement-USA TODAY Sports)

The Florida-Idaho game from Saturday that was suspended due to lightning will not be played this season, the two schools announced this evening.

“We looked at a number of options and, in the end, we both thought it was in the best interest of our student-athletes and football programs to play out the remainder of our respective schedules as they stand,” Foley said.

Florida will honor the contract guarantee to Idaho, which was $975,000. In addition, all tickets purchased through the schools will be refunded.

“I want to thank UF, especially AD Jeremy Foley, for the professional and first-class way they worked through this issue and the focus on student-athlete welfare,” Spear said.

As a result of the cancellation of the 2014 game, the two schools have agreed to meet again in Gainesville in 2017. An exact date will be announced later.

Florida and Idaho mutually shared an open date on Oct. 25 this season, but neither school wanted to play on that date. The Gators wanted to preserve their open date prior to the annual rivalry game against Georgia in Jacksonville.

Idaho, on the other hand, would have had to play games on 11 consecutive weeks if the Florida game was moved to Oct. 25.

The addition of Idaho to the 2017 schedule gives Florida three non-conference games for that season. The Gators open vs. Michigan in Arlington, Texas and the close the regular-season at home vs. Florida State.

Idaho now has their non-league slate tentatively completed in 2017. The Vandals also host UNLV and travel to Nevada and Western Michigan.

And now we wait for UF to finish 5-6 and scramble to find a FCS school to play the same week as the SEC championship while petitioning for a waiver to get into a bowl with 2 FCS victories (maybe).

They might try to petition for a 5-6 eligibility waiver in that position, and I bet the NCAA would grant it.

Florida already has Eastern Kentucky so if they are 5-6, another 1-AA game wouldn’t help. What they could potentially do is get Hawaii or one of the Mountain West teams who didn’t make use of the 13th game exemption to go out there if they are not playing in the Mountain West Championship.

Or Florida goes 6-5 or better & there’s no problems.

Props to Florida for doing the right thing. Idaho’s athletic department is not exactly swimming in money and the school had set expenses to go across the country and it will be difficult for Idaho to find a money game replacement at this time. Good points by Dave , in addition to the MWC teams, Oregon State is going to Hawaii this weekend and has only 12 games so OSu is another option and that could definitely be a more competitive game .

If Oregon State and the MWC teams wanted a 13th game, they would’ve scheduled one by now. I doubt they would take on a Florida team that could quite possibly beat them and them a 7th loss. 6-6 is bowl eligible. 6-7 is not. Even if Idaho somehow gets to 6-5 they wont be bowl eligible due to academic sanctions.

Why was the game not played on Sunday or Monday? I just don’t get it.

Read this statement from Florida on why the game couldn’t be played on Sunday.

Logistics. It takes several thousand employees to work a major game . Many of hem are part timers with other commitments. Who is going to handle the public safety, security, parking, concessions, field maintenance and other behinds the scenes stuff.

Also, Idaho was going to fly back right after the game. It is likely there was no hotel that could accommodate the team. Their charter airline has a plane ready. That plane had a schedule to keep. The airline (Sun Country in this case) needed to have it’s plane back in Idaho so it could be placed back into service elsewhere. How would you fly 100 to 150 people back across the country on short notice?

Pathetic: “Florida and Idaho mutually shared an open date on Oct. 25 this season, but neither school wanted to play on that date.”