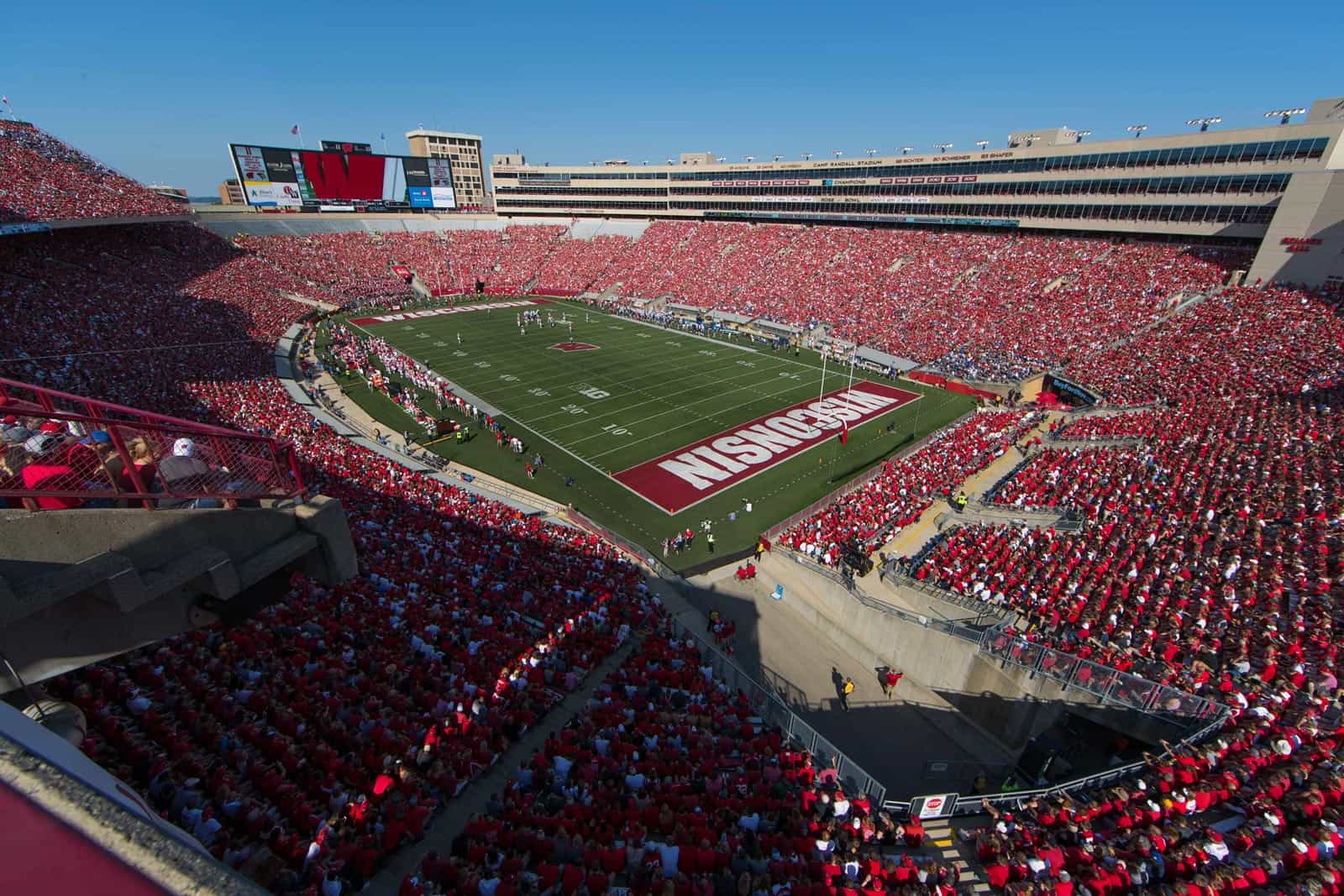 The 130 college football programs competing at the FBS level have home stadiums that range in capacity from Charlotte’s 15,314-seat Jerry Richardson Stadium to the University of Michigan’s Michigan Stadium, which holds a whopping 107,601.

Regardless of the size, age, conference affiliation or success rate, each of these venues has a unique story to tell. What follows are five of the absolute best.

Some 40 years before the Badgers began playing football in Camp Randall Stadium, the same physical site (which shared the same name) was occupied by 70,000 men training to serve as soldiers in the Union army during the Civil War. The complex was also used during the same time (1861-65) to house nearly 1,500 Confederate prisoners of war.

According to Daniel Einstein, the University of Wisconsin’s historic and cultural resources manager, those who experience Camp Randall the football stadium are literally walking through history.

There, lining up perfectly in the student section on the field’s north side, is where a group of barracks was built for enlisted Union men during the Civil War. The space for the stadium’s luxury suites once served as a hillside headquarters for Camp Randall military operations.

When the football players are marching down the field, they are following in the footsteps of the military parade ground during the Civil War period…Most people don’t have an awareness of the precise cohabitation of the present activities with the Civil War activities. I wouldn’t say that the level of awareness is very high. But there is certainly a mystique.

NC State’s stadium used to be a lake

Earle Edwards was the head coach at NC State from 1954-70, earning a 77-88-8 record in 17 seasons. While that may not seem all-world, he won the ACC five times, including capturing three straight titles from 1963-65. It was good enough to get his employer to agree to build him a new football stadium, which was completed in time for the 1966 season. Carter-Finley Stadium – as it is now known – was built on 75 acres of land that included a small research pond.

A lake that had been [used] as a research fish hatchery was drained to help create the bowl of the stadium, while fields of alfalfa hay and corn were plowed under, cleared and leveled to create the expansive parking lots.

The seats for the new stadium were initially built into the sides of the old lake. The South end zone was left open, utilizing the pond’s original grassy bank for student seating and general admission, a feature that was enjoyed until the stadium was renovated in the early 2000s.

Arthur D. Carr (1883-1966) was a native of Athens, Ohio, who, according to a piece by Kayla Beard in The Athens News, played quarterback at Ohio University from 1903-04. Not only is Carr “recognized as the first black student athlete to play football at OU” but it’s thought that “he may have been the first black quarterback of any predominantly white university football team.”

Carr graduated from Ohio University in 1905 and from there continued his education at Howard University where he earned his medical degree in 1912. He went on to have an “extremely successful career” as both a physician and a teacher.

But Carr’s legacy in college football doesn’t end there. In 1928 he donated 4.5 acres of land to his alma mater – Ohio University – where “the front entrance of Peden Stadium and a portion of the parking lot sit now.” The Bobcats have been playing football at Peden (originally branded “Ohio Stadium”) since 1929. It’s current name honors Don Peden, who compiled a 121-46-11 record (including six Buckeye Athletic Association titles) as the head coach at OU from 1924-46. Perhaps someday Carr’s name will also be honored at the facility he helped become a reality.

In the early 1930’s, then Louisiana governor Huey P. Long asked the state for funds to expand LSU’s football stadium. After legislators denied his request, he found out that what the state had approved was money for new dorms. Combining the earmarked funds with his gridiron vision, Long built a dormitory that was shaped like – and also functioned as – a football stadium. The updated version of Tiger Stadium – which seated 22,000 football fans on top of rooms which housed several thousand students – was completed in 1937. The stadium dorms, which were all-male and far from luxurious, were occupied until the late 1980s. While there are still 500-plus dorm room windows visible on the exterior of Tiger Stadium, the most-lasting legacy of its former residents may be the deafening noise level on game days.

Because of the unique underlying architecture of the stadium dorms, the lower bowl of Tiger Stadium has a steepness that makes seating more intimate while also facilitating some fairly intense acoustics. Yes, the dorms are the structural reason why Death Valley is so insanely loud.

Georgia Tech’s Grant Field opened in 1915, originally consisting of a single set of concrete stands that held nearly 6,000 fans on what is now the west side of the stadium. The facility grew around this base, eventually reaching 40,000-plus seats in the late 1960s when upper decks were added to raise the capacity to nearly 60,000. It was during this set of renovations that it was decided it would be easier to build over the old original west side stands rather than remove them.

This means that those very first concrete bleachers, complete with seat numbers and the brick walls that encompassed the original structure, still stand. Only now, rather than being in the open air, they’re located in the bowels of the 2021 version of what has been called Bobby Dodd Stadium since 1988. While this hidden treasure isn’t open to the public, the space is used for storage. Follow the link to enjoy some amazing pictures.

College football is the only sport I know where stadiums have nicknames.

Some of those same Union soldiers, trained at Camp Randall, later stormed up Cemetery
Ridge at the behest of Arthur McArthur and his “On Wisconsin!” command.