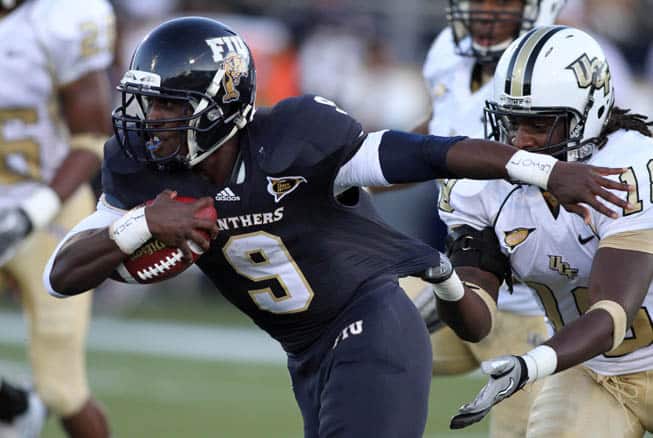 FIU and UCF will now meet each season through 2016. (Robert Mayer-USA TODAY Sports)

FIU will host UCF at FIU Stadium in Miami on a date to be determined in 2015. The Golden Panthers will then travel to face the Knights at Bright House Networks Stadium on Sept. 17, 2016.

The two schools first played a home-and-home series back in 2011 and 2012 with each team notching a win at home. FIU hosts this years match-up tomorrow night (Sept. 6), and then the venue moves to Orlando on Sept. 6, 2014.

“I want to thank UCF Director of Athletics Todd Stansbury and Head Coach George O’Leary for extending the series between FIU and UCF,” said FIU Executive Director for Sports and Entertainment Pete Garcia. “I know that our fans, students and alumni enjoy playing these state rivalry games and we will continue to schedule quality opponents like UCF.”

FIU now has one non-conference game slated for the 2015 season. In 2016, the Golden Panthers also host Maryland on Sept. 10.

As for the UCF Knights, they now have a second game for 2015 to go along with a trip to South Carolina on Sept. 26. They were previously scheduled to play at Maryland in 2016, but that series has been postponed.