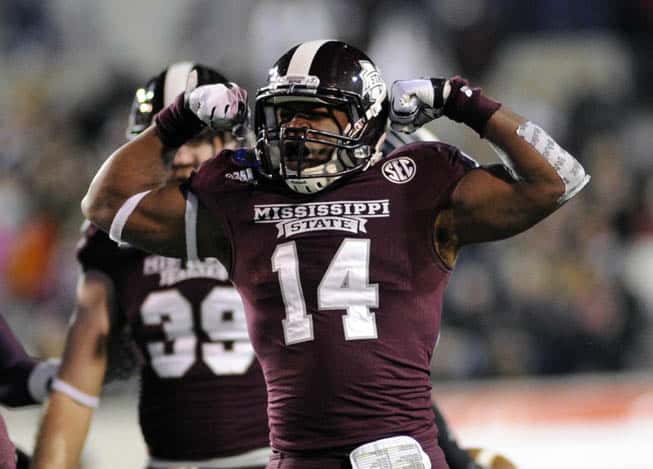 Mississippi State had one of the toughest schedules in 2013. (Justin Ford-USA TODAY Sports)

Strength of schedule has been a big topic in college football since the playoff was announced. But it really heated up on Sunday when the SEC announced their revised scheduling format.

To aid in the discussion, fans, writers and even the schools have been referencing the final strength of schedule rankings of their team for the 2013 season.

The source of that information comes from the NCAA’s own website, and the Top 35 was tweeted in a graphic Sunday night by the SEC Communications Director.

But a closer look at those numbers has revealed that they don’t add up. Tennessee is listed as number one by the NCAA with their past opposition having a record of 79-42. But the actual number is 94-59, which places them 13th.

So what is the discrepancy? It’s not clear to me. Tennessee is missing 15 wins and 17 losses from their totals. If the NCAA method is omitting FCS games, then 12 losses are accounted for because Austin Peay went 0-12.

That still leaves 15 wins and 5 losses unaccounted for. Conference championship games and bowl games may not be included, but that still isn’t enough.

Can anyone figure this out? While we crowd source, here are what we believe to be the most accurate NCAA method strength of schedule rankings courtesy of KPIsports.net.

The Playoff Guru has solved the issue here. The information on the NCAA’s site does not include records of teams played that are FCS or that are FBS Transitional. Last season, Appalachian State, Georgia Southern, Georgia State, and Old Dominion were classified as FBS transitional teams.

Also, conference championship games are included, but not bowl games.

Maybe they removed FCS games from opponents’ records too?

It is all malarky when you have Alabama and our “national Chmpion” FSU beating up on FCS schools in November!!

The Playoff Guru has solved the issue here. The information on the NCAA’s site does not include records of teams played that are FCS or that are FBS Transitional. Last season, Appalachian State, Georgia Southern, Georgia State, and Old Dominion were classified as FBS transitional teams.

Also, conference championship games are included, but not bowl games.

NCAA Strength of schedule also does not include the result of the game played against the opponent. Tennessee went 5-7(4-7 if you do not count Austin Peay) so Tennessee’s opponents went 7-4 vs them so subtract 7 victories and 4 losses. And subtract AP’s 11 other losses. 94-59 becomes 87-44. Now you are missing 8 victories and 2 losses. Is that opponents games vs lower division teams. I think so – since I am pretty sure that bowl games are included.

For instance, Alabama had the #59 strength of schedule. Not bad, but not great. But, that #59 ranking doesn’t account for the fact that Alabama hosted both Georgia State (FBS transitional – that went 0-12 by the way) and Chattanooga (FCS, 8-4) in 2014? So, Alabama had the #59 SOS, but only if you ignore their TWO weakest cupcake opponents and pretend that the TIde played 10 games against FBS opponents? That is lame.

It’s also interesting to note that Alabama had BYE weeks before Texas A&M and LSU. And the FCS opponent before Auburn.

Indeed it does. And the value SEC SOS receives, by far, the greatest advantage of this bogus statistic.

I hope the payoff… oops…playoff committee sees through the smoke and mirrors.