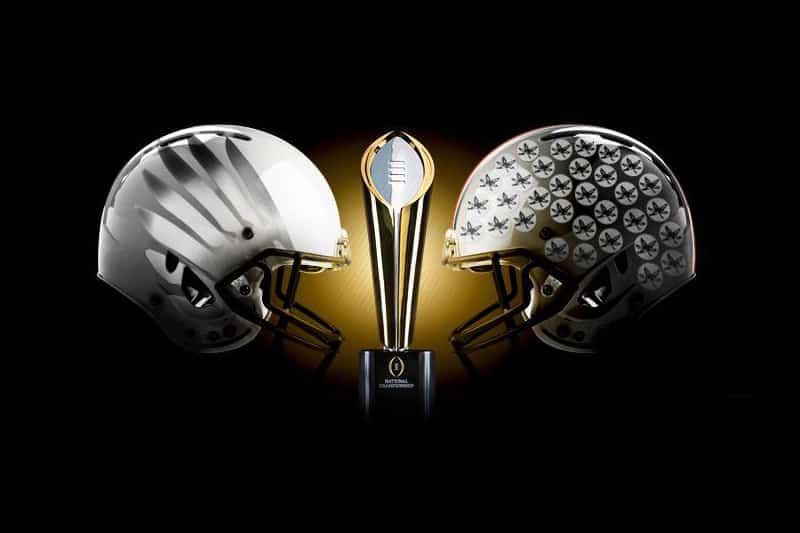 Oregon and Ohio State have met eight times in history, the Buckeyes winning on every occasion. The series dates back to 1958 and includes two postseason meetings: The 1958 and 2010 Rose Bowls.

The Buckeyes have outscored the Ducks 190-69 all-time, the narrowest margin of victory coming in a 10-7 decision in the 1958 Rose Bowl.

This is only the second time in history the two teams have met as ranked foes, the other being when then No. 8 Ohio State beat No. 7 Oregon in the 2010 Rose Bowl.

Not only have these two never met as head coaches, they’ve never squared off on opposing staffs at any point in their coaching careers.

How They Got Here

Oregon’s 13-1 record includes seven wins over teams that went on to bowl eligibility, five over losing FBS teams and one vs. a 2-10 program from the FCS. The Ducks went 3-0 in regular-season, non-conference play, beating FCS South Dakota, Michigan State (Big Ten) and Wyoming (Mountain West).

Oregon’s only loss came to 10-4 Arizona. Overall, they beat teams that finished the season 90-76 (54%), five of which were ranked in the final CFB Playoff rankings.

Ohio State’s only loss was to the 7-6 Hokies. Overall, they beat teams that finished 98-69 (60%), four of which finished the year ranked in the CFB Playoff rankings.

Though there are a ton of ways to approach how Oregon and Ohio State matchup, following are six of the biggest strength vs. weakness matchups between the two. Each presents an opportunity for one team to expose a weakness of the other, simply by doing something they’ve done well all year.

Forced Fumbles: Only one team has forced more fumbles than Oregon (20), it’s the backbone of its No. 10 ranking in takeaways. This sets up well vs. an Ohio State offense that ranks No. 82 in fumbles lost with 11, including multiple drops vs. Kent State, Michigan State and Minnesota.

Remember, the Ducks forced four fumbles in the win over Florida State in the semi-final, winning the game 59-20 despite giving up 528 yards of offense to the Noles.

Red Zone Touchdowns: Only two teams in the FBS have allowed more touchdowns in the red zone than the Buckeyes have, North Texas and Texas Tech. Included in the 73.2% season average are 100% success rates by Virginia Tech, Cincinnati, Maryland, Michigan and Alabama, who combined to score touchdowns 16-of-16 times inside of Ohio State’s 20-yard line.

Oregon ranks No. 32 in red zone touchdowns, again, not all-world, but definitely worth mentioning. The Ducks have scored six points on 67.1% of their red-zone visits and went 3-of-4 vs. Florida State.

Where the Buckeyes have 129 rushing plays of 10-plus yards the Ducks have coughed up 76 such plays.

Oregon’s defense coughed up rushing plays of 10 (three times), 17, 19, 20 and 21 yards to a Florida State offense that ranks No. 98 in the nation in rushing yards. These plays were all but obliterated by the Seminoles five turnovers. Throw in that Ohio State ranks No. 10 in rushing offense and this sets up a potentially explosive situation.

Third Down Conversions: If you track the Buckeye’s success this year, the common thread is converting third downs. Ohio State ranks No. 3 in the nation in third down conversions (51.91%), only Auburn and Georgia Tech are better.

This is likely the one underlying stat that will decide the game. The advantage, at least on paper, goes to Ohio State’s defense.

Sacks: The Bucks’ D has earned a No. 8 rank in sacks this season (43), registering three-plus in 10 of its 14 games. Included are the high-water marks of five sacks apiece in wins over Penn State and Michigan and three vs. an Alabama offensive line that had only given up only 13 coming into the playoff game (No. 18).

This sets up as a big advantage against an Oregon O-line that ranks No. 86 in sacks allowed, coughing up 29 for an average of two per game. That makes Marcus Mariota the twelfth most sacked quarterback in the FBS.

Oregon ranks No. 119 rank in penalty yards. Only nine teams have been penalized more than the Ducks this season, giving up 72.8 yards per game in penalties. Oregon has suffered 10-plus penalties three times: 10 the narrow 38-31 win over Washington State, 10 in the 34-21 regular-season loss to Arizona and 13 in the 51-13 win over Arizona in the Pac-12 title game.

Tony Washington (#91) and Torrodney Prevot (#86): Both linebackers, they lead the team with three forced fumbles apiece, a mark that ties them each for the fourth most in the nation. Washington also has two fumble returns for 79 yards and one score.

Troy Hill (#13): A senior cornerback, he leads the nation in broken-up passes (18) and is No. 2 in passes defended (19). Ironically, Hill hails from Youngstown, Ohio.

Michael Bennett (#63): A senior defensive tackle, he’s only had seven sacks this season (No. 3 on the team, No. 60 in the FBS), but he’s gotten to the quarterback at least once in his last four games and twice in the win over Wisconsin in the Big Ten championship.

it was great sitting with my kids watching pregame and hearing announcers talking about penis and droppingthe f-bomb. Are there any lines ESPN won’t cross?

They were pretty funny.