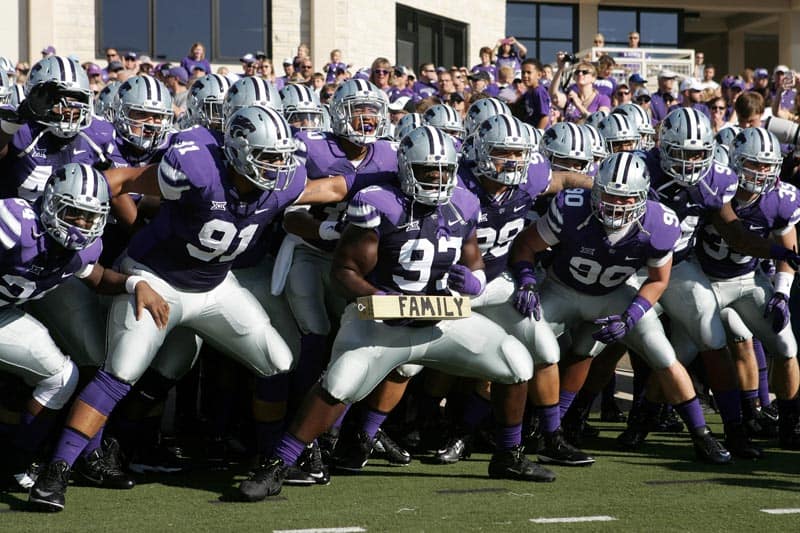 “After the love is gone, what used to be right is wrong.”

Earth, Wind & Fire made these lyrics famous way back in 1979, but they couldn’t be more true than the day after the first-ever CFB Playoff games. Yes friend, while it’s the biggest hangover in the history of college football, we can’t just ignore the six legit postseason games standing between us and the national title contest.

This is no time to hit the snooze button, roll over and go back to sleep. It’s game time.

The cream of the crop on Friday is the final regular-bowl game featuring ranked foes: No. 11 K-State vs. No. 14 UCLA in the early evening on ESPN.

On the last Saturday of college football this season, it’s an intriguing matchup between ECU and Florida, followed by Sunday’s late primetime clash between Arkansas State and Toledo.

Both are on ESPN and both set-up as tremendous matchups packaged as mundane, ho-hum bowl games. Don’t miss out.

12:00PM EST, ESPN: LOCKHEED MARTIN ARMED FORCES BOWL:  HOUSTON (7-5) vs. PITTSBURGH (6-6) (Amon G. Carter Stadium, Fort Worth, Texas): The most recent and only meeting between these two was a home-and-home series in 1996-97, the visitor winning on each occasion. The great matchup here is Pitt’s No. 16-ranked rushing attack, anchored by the nation’s No. 5 back James Conner (#24), taking on Houston’s No. 11-ranked scoring defense. The Cougars have only given up 170-plus rushing yards once this season, allowing 323 in a 33-25 loss at BYU. Pitt, on the other hand, has failed to hit the 200-yard rushing mark on only four occasions, all losses: 185 vs. Iowa, 129 vs. Akron, 116 vs. Virginia and 198 vs. Georgia Tech.   Check out Houston linebacker Efrem Oliphant (#50), No. 10 in the FBS in tackles (129). The Cougars last won a bowl game in 2011 when they downed No. 24 Penn State in the TicketCity Bowl. Pitt won as recently as last season when they beat Bowling Green in the Little Caesars Bowl.

3:30PM EST, ESPN: TAXSLAYER BOWL:  IOWA (7-5) vs. TENNESSEE (6-6) (EverBank Field, Jacksonville, Fla.): Only the third-ever meeting, these two clashed in the 1982 Peach Bowl and the 1987 Kick-Off Classic, each team winning once. What’s killed Iowa this season is turnovers, giving the ball away two-plus times on five occasions this season including coughing up two in the 20-17 loss to Iowa State, three in the 38-31 loss to Maryland, three in the 51-14 defeat vs. Minnesota and a whopping four in the 37-34 loss to Nebraska. Tennessee has 22 takeaways this season (No. 38 in the FBS), earning two-plus in eight of its 12 games. Look out for Volunteer defensive end Derek Barnett (#9), a true freshman who is No. 4 in the nation in tackles for a loss (20.5) and No. 13 in sacks (10). Tennessee hasn’t won a postseason game since dropping No. 18 Wisconsin in the 2007 Outback, while Iowa hasn’t won since beating No. 14 Missouri in the 2010 Insight.

10:15PM EST, ESPN: TICKET CITY CACTUS BOWL:  WASHINGTON (8-5) vs. OKLAHOMA STATE (6-6) (Sun Devil Stadium, Tempe, Ariz.): These two last met in 1985, a game Washington won 31-17, the only other meeting was in 1980, the Cowboys won that contest 24-18. Neither of these two have had stellar seasons statistically, Washington faring better overall on both sides of the ball. The biggest potential mismatch to look out for is Oklahoma State’s No. 57 ranked pass offense vs. the Huskies’ No. 123-ranked secondary. Though the Cowboys aren’t on their normal blistering pace through the air, they have managed 270-plus passing yards in their last two outings, road games at Baylor and Oklahoma. This is a scary proposition for a Washington D that coughed up 300-plus air yards in four of its last five games. This is your last opportunity to watch senior Huskie linebacker Hau’oli Kikaha (#8), No. 2 in the FBS in both sacks (18) and tackles for a loss (24). For Oklahoma State, check out true-freshman quarterback Mason Rudolph (#10), a former 4-star recruit who started the final two games of the season, including the 38-35 upset win at Oklahoma.