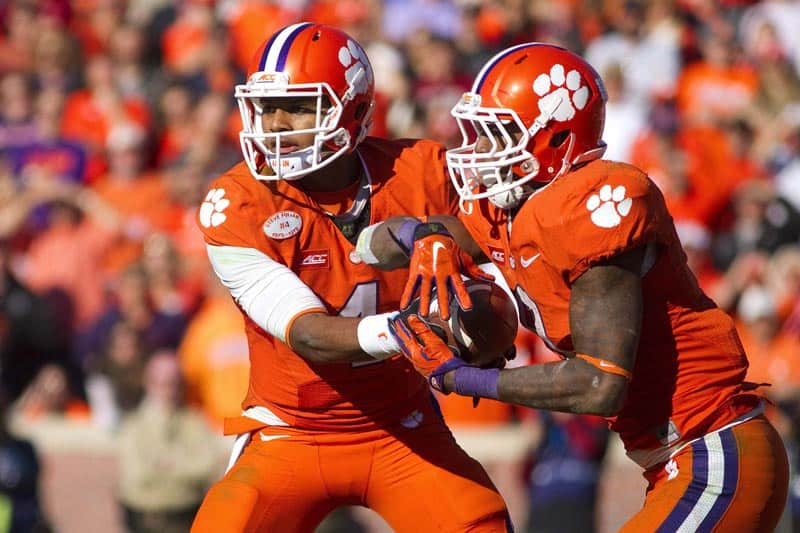 While there is lots to look forward to later in the week, don’t forget to tune in Monday and Tuesday for six solid bowl matchups.

The cream of the crop on Monday is Clemson-Oklahoma, a game pitting one of the best young running backs in the game vs. one of this seasons’ best defenses.

On Tuesday, it’s the dynamic duo of LSU-Notre Dame and Georgia-Louisville, both featuring top-tier coaches in compelling strength-vs.-strength matchups.

The entire early-week offering is aired on ESPN, meaning its simple for the viewer—stay tuned in to one channel and you won’t miss a beat.

If you’re already feeling a bit weary of the postseason, keep this in mind: We’re only 16 days away from a world devoid of college football.

2:00PM ET, ESPN: AUTOZONE LIBERTY BOWL: TEXAS A&M (7-5) vs. WEST VIRGINIA (7-5) (Liberty Bowl, Memphis, Tenn.): The first-ever football meeting between the two schools, West Virginia is looking for its first bowl victory since the 2011 BCS Orange Bowl when it blasted No. 14 Clemson 70-33. This game is the story of two prolific passing attacks taking on defenses that have been inconsistent against the pass. The Aggies are No. 12 in passing offense but rank No. 63 vs the pass, giving up 250-plus air yards to South Carolina, Mississippi State, Alabama, Louisiana-Monroe and Missouri. The Mountaineers have the No. 9-ranked passing attack, but will be playing minus starting quarterback Clint Trickett (#9), who just announced his retirement due to multiple concussions. This puts the ball in the hands of Skyler Howard (#3), a sophomore who took the bulk of the snaps in the final two games this season. On defense, WVU is No. 64 against the pass, giving up 250-plus to Alabama, Maryland, Texas Tech, K-State and Iowa State. Though passing comes to mind when you think of these two programs, A&M has given up an average of 361 ground yards in its last three outings. This makes the unlikely heroes a pair of sophomore running backs, Rushel Shell (#7) and Wendell Smallwood (#4), WVU’s leading rushers. Keep an eye out for Aggies’ true-freshman defensive end Myles Garrett (#15), a former 5-star recruit who finished the regular season tied for the eighth-most sacks in college football (11).

5:30PM ET, ESPN: RUSSELL ATHLETIC BOWL: No. 17 CLEMSON (9-3) vs. OKLAHOMA (8-4) (Florida Citrus Bowl, Orlando, Fla.): Just the third-ever meeting, these two last clashed in the 1989 Citrus Bowl, also in Orlando, a game Clemson won 13-6 its only win over Oklahoma. Clemson has made its way this season with one of the best defenses in the nation, ranked No. 7 in scoring, No. 7 vs. the run and No. 7 against the pass. This sets up deliciously against an Oklahoma offense that ranks No. 11 in scoring and No. 9 in rushing yards. It’s the Sooners’ true-freshman running back Samaje Perine (#32), who rushed for 200-plus three times this season, including hanging up an NCAA FBS record 427 on Kansas, taking on Clemson defensive end Vic Beasley (#3), tied for the seventh-most tackles for a loss (18.5) and the eighth-most sacks (11) in the country. Though Oklahoma quarterback Trevor Knight (#9) is due back, it’s unfortunate that Clemson quarterback Deshaun Watson (#4) is out after surgery to repair a torn ACL. The Tigers were 4-1 with Watson at the helm in 2014 as opposed to 5-2 with Cole Stoudt (#18).

3:00PM ET, ESPN: FRANKLIN AMERICAN MORTGAGE MUSIC CITY BOWL: NOTRE DAME (7-5) vs. No. 23 LSU (8-4) (LP Field, Nashville, Tenn.): The 11th all-time game, these two last met in the 2007 BCS Sugar Bowl, a game LSU won 41-14. The series is tied at five games apiece, the Tigers also won the only other postseason meeting, the 1997 Independence Bowl. The compelling matchup in this one is Notre Dame’s No. 16-ranked pass offense squaring off with an LSU D that is No. 4 vs. the pass. The Irish haven’t dipped below the 225-yard passing mark this year, while the Tigers have only given up 200-plus air yards three times, to Mississippi State, Auburn and Alabama, all losses. Brian Kelly says he’s going to start both Everett Golson (#5) and Malik Zaire (#8) at quarterback, so not only will this be interesting viewing, it will be a glimpse into the future of Irish football.

6:30PM ET, ESPN: BELK BOWL: No. 13 GEORGIA (9-3) vs. No. 21 LOUISVILLE (9-3) (Bank of America Stadium, Charlotte, N.C.): The first-ever football meeting between the two schools but the third-ever meeting between head coaches Mark Richt and Bobby Petrino (the previous meetings came when Georgia played Arkansas in 2009 and 2010). This game features a stellar strength-vs.-strength matchup between the Bulldogs’ No. 13-ranked rush offense and the Cardinals’ No.-3 ranked rush defense. It’s one of the best matchups of the bowl season. The other compelling bit is Georgia quarterback Hutson Mason (#14), a kid who has only thrown four picks all year, taking on a Louisville secondary that leads the nation with 25 interceptions. Is Mason really that careful or are the Cardinals really that opportunistic? Keep an eye on Georgia’s true-freshman running back Nick Chubb (#27), despite only starting six games he is No. 27 in the FBS in rushing yards (1,281). For Louisville, it’s the final chance this season to see sophomore safety Gerod Holliman (#8), leading the nation with 14 interceptions. All in all, this is one of the best games of the 2014-15 postseason.

10:00PM ET, ESPN: FOSTER FARMS BOWL: MARYLAND (7-5) vs. STANFORD (7-5) (Levi’s Stadium, Santa Clara, Calif.): Another first-ever meeting, Maryland has only won two games against Pac-12 members (Cal in 2008 and UCLA in 1955), both home games in College Park, Md. The Terrapins have never won a game on the West Coast. Stanford has been all-about defense this year, ranked No. 2 in scoring, No. 11 vs. the run and No. 7 vs. the pass. This doesn’t bode well for a Maryland team that rushed for fewer than 100 yards in three of its five losses. The key to beating Stanford is converting third downs, the Cardinal have held opponents to an average of 35.64% on third-down attempts (No. 24) and have lost all but one game where the other team has converted 36% or better. The Terrapins rank No. 119 on third down this season, converting only 31.98 percent of the time. Keep an eye on Maryland cornerback William Likely, a sophomore tied for the fourth most interceptions in the FBS (six). This game is at the new home of the NFL San Francisco 49ers, located a convenient 13 miles from Stanford Stadium.