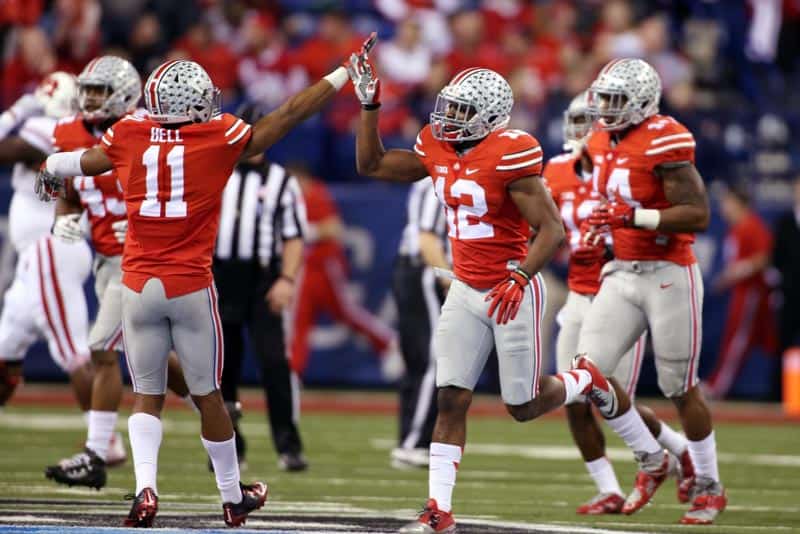 This is what we waited through 16 long years of the BCS for…bowl games that lead to a national championship game.

If you don’t watch any other part of the postseason, this is the time to tune in, this is our time.

The class of the New Year’s Eve schedule comes early when TCU squares off with Ole Miss (ESPN), featuring one of the best offenses in the nation vs. the very best defense.

New Year’s Day kicks off with what might be the best single day in the history of college football: Auburn-Wisconsin (ESPN 2) and Baylor-Michigan State (ESPN) early followed by the first-ever meaningful bowl games, Oregon-Florida State in the late afternoon (ESPN) and Alabama-Ohio State in primetime (ESPN).

The winner of each will meet on Jan. 12 for the biggest, cheesiest enchilada in the history of the game.

12:30PM ET, ESPN: CHICK-FIL-A PEACH BOWL: No. 9 OLE MISS (9-3) vs. No. 6 TCU (11-1) (Georgia Dome, Atlanta, Ga.): These two haven’t met since 1983, Ole Miss holds the all-time advantage 5-1, TCU’s only win coming in a 1949 regular-season game in Fort Worth. This is the best New Year’s Eve contest featuring compelling matchups on both sides of the ball: TCU’s No. 2 scoring offense vs. Ole Miss’ No. 1 scoring defense, the Rebels’ No. 30-ranked passing attack vs. TCU’s No. 87-ranked secondary and Ole Miss quarterback Bo Wallace (#14), who has thrown four picks in his last three games taking on a Horned Frog defense that ranks No. 2 in the nation in both takeaways (36) and interceptions (23). Keep an eye on potential game changers lurking on each squad’s defense: TCU linebacker Paul Dawson (#47), No. 7 in the FBS in solo tackles (78) and No. 9 in tackles for a loss (18.5) and Ole Miss cornerback Senquez Golson (#21), No. 2 in the nation in interceptions (nine). Will either of these former Playoff contenders come out flat, suffering from a case of “if we had only…?” Ole Miss and TCU have had two other postseason meetings, the 1956 Cotton Bowl and the 1948 Delta Bowl (in Memphis, Tenn.).

8:00PM ET, ESPN: CAPITAL ONE ORANGE BOWL: No. 7 MISSISSIPPI STATE (10-2) vs. No. 12 GEORGIA TECH (10-3) (Sun Life Stadium, Miami Gardens, Fla.): These two have played four times in history with Georgia Tech winning on all four occasions (2009, 2008, 1929 and 1908). Look for Mississippi State’s No. 25 rank in rushing defense to be tested against Georgia Tech’s No. 3 rank in rushing yards, powered by the option. On the flip side, the Bulldogs’ No. 15-ranked scoring attack might have a field day vs. Georgia Tech’s No. 52-ranked scoring D. The key to beating Mississippi State is scoring touchdowns in the red zone. The Bulldogs rank No. 1 in the nation in red zone defense, giving up a score only 60% of the time and a touchdown only 37.5% of opponent’s visits inside the 20. These were numbers that got blown up in losses to Alabama and Ole Miss, which scored on a combined 75% of red zone visits, 63% resulting in touchdowns. Georgia Tech has scored on 79.71% of its visits inside the red zone (No. 88 in the FBS) and scored touchdowns 68.12% of the time (No. 24).

12:00PM ET, ESPN 2: OUTBACK BOWL: No. 19 AUBURN (8-4) vs. No. 18 WISCONSIN (10-3) (Raymond James Stadium, Tampa, Fla.): The fourth-ever meeting and the third-consecutive bowl clash, these two last faced each other in the 2006 Capital One Bowl, a game then No. 21 Wisconsin won over No. 7 Auburn 24-10. This game features two of the best rushing attacks in the country: Auburn’s No. 12- ranked ground game anchored by running back Cameron Artis-Payne (#44) (No. 17 in the FBS in yards per game) and Wisconsin’s No. 4-ranked attack, headlined by Heisman runner-up Melvin Gordon (#25) (No. 1 in yards per game). The imbalance, at least on paper, is the Badgers’ defense, statistically superior to the Tigers’ D. Auburn is No. 46 vs. the run, giving up an average of 229 rushing yards in its four losses vs. 110 in its eight wins. Wisconsin, on the other hand, is No. 17 vs. the run, giving up 200-plus ground yards only twice this season: 203 in the upset defeat at Northwestern and then a whopping 301 in the 59-0 beat down vs. Ohio State in the Big Ten title game. The better defense will win this game.

12:30PM ET, ESPN: GOODYEAR COTTON BOWL: No. 8 MICHIGAN STATE (10-2) vs. No. 5 BAYLOR (11-1) (AT&T Stadium, Arlington, Texas): These two have only clashed once previously, 47-years ago in 1968, a regular-season meeting that the Spartans won 28-10 in East Lansing. This is one of the most compelling matchups of the postseason: Baylor’s No. 1-ranked scoring offense squaring off with Michigan State’s No. 12-ranked scoring defense. It’s just a shame that this isn’t last year, when MSU’s D was more experienced and ranked No. 3 in scoring. Either way, this game will go a long way in answering the age-old question of which is better: Trying to score more points than your opponent or trying to make sure your opponent doesn’t score any points. What may make the difference is the Spartans’ No. 39-ranked pass offense vs. the Bears’ No. 104-ranked secondary, a unit that gave up an average of 397 passing yards to its last three opponents. Check out Spartan running back Jeremy Langford (#33), he’s put together a nine-game run of 100-plus yard performances and is looking for number 10 in this game.

1:00pm ET, ABC: BUFFALO WILD WINGS CITRUS BOWL: No. 25 MINNESOTA (8-4) vs. No. 16 MISSOURI (10-3) (Orlando Citrus Bowl Stadium, Orlando, Fla.): The ninth-ever meeting and the first-ever in a bowl game, these two last met in 1970, a game Mizzou won 34-12, Minnesota’s last win over the Tigers came in 1945. This is a battle between two scrappy programs from power conferences who are better than advertised, though this matchup won’t get near the press of the rest of the New Year’s Day games will, don’t be fooled, this will be a great game and is well worth watching. The key matchup is Minnesota’s No. 27-ranked rushing attack taking on a Missouri rushing D that ranks No. 30. Check out Golden Gopher running back David Cobb (#27), No. 9 in the FBS in rushing yards (1,548) and Tiger defensive end Shane Ray (#56), No. 3 in the nation in tackles for a loss (21) and No. 6 in sacks (12.5). Minnesota has dropped six-straight bowl games, last beating Alabama in the 2004 Music City Bowl.

4:30pm ET, ESPN: ROSE BOWL/CFB PLAYOFF SEMIFINAL: No. 2 OREGON (12-1) vs. No. 3 FLORIDA STATE (13-0) (Rose Bowl, Pasadena, Calif.): The first-ever CFB semifinal game is also the first-ever clash between Oregon and Florida State. While it’s fun to talk about how Florida State has barely won a games, it’s more important to understand why: FSU does not have a championship defense (No. 30 in scoring, No. 60 vs. the run and No. 50 vs. the pass), it also is heavily dependent on the pass, ranking No. 14 in passing yards vs. No. 104 in rushing. Finally, the Noles rank No. 85 in turnover margin, a stat driven by 19 interceptions thrown, the fourth most in the FBS ranks. This sets up well for Oregon: With an offense that is balanced and lethal, ranked No. 3 in scoring, No. 22 in rushing and No. 11 through the air and the No. 2 rank in turnovers, a number that includes 25 takeaways, No. 25 in the nation. The one blaring area of concern for Oregon is its No. 103-ranked secondary, a unit that held its final three opponents 145 yards through the air but before that gave up 328 in a string of games vs. Cal, Stanford and Utah. If the Ducks’ defense can shut Florida State down through the air and force them to run, they could be on their way to the title game. The potential game changer in this one is Oregon safety Erick Dargan (#4), his six interceptions tie him for the fourth-most in the nation, a scary proposition for FSU quarterback Jameis Winston (#5), who didn’t throw a pick in the ACC title game but before that threw at least one in six consecutive games, including three at Louisville, two vs. Virginia and four vs. Florida. All stats aside, the Seminoles are the only team in the Playoff that hasn’t lost a game, a fact that Oregon, and all comers, will have to respect. If nothing else, the Noles know how to win, even if it isn’t pretty.

8:30pm ET, ESPN: ALLSTATE SUGAR BOWL/CFB PLAYOFF SEMIFINAL: No. 1 ALABAMA (12-1) vs. No. 4 OHIO STATE (12-1) (Mercedes-Benz Superdome, New Orleans, La.): The fourth-ever meeting and the first since the 1995 Citrus Bowl, Ohio State has never beaten Alabama. On paper, this is the better of the two playoff games, pitting the Tide’s No. 17-ranked scoring offense vs. the Buckeyes’ No. 23-ranked scoring defense and Alabama’s No. 4-ranking scoring defense vs. Ohio State’s No. 4-ranked scoring offense. The key to beating the Buckeyes is stopping them on third down, where they’ve posted a 51.52% average this season (No. 4). It’s no coincidence that Ohio State went 25% on third down in its loss to Virginia Tech, and again, it’s no surprise that it posted a 58% average in its next 10 games, all wins, including a season-high 71.43% night in the statement win at No. 8 Michigan State. Hidden in the blowout win over Wisconsin in the Big Ten title game is a 25% performance on third down, when the Bucks went 2-of-8, this drop in performance was masked by Wisconsin’s whopping four turnovers. OSU’s third-down performance will likely, again, be compromised by backup quarterback Cardale Jones (#12), not because he’s not good, but because he’s inexperienced, with a mere 36 attempts as a collegian. Remember, he’ll be facing Alabama’s No. 4-ranked scoring defense, a unit that has held foes to 30% on third down this season. The Buckeyes cannot allow themselves to believe that the 59-0 beat down of No. 13 Wisconsin means that they are invincible, instead they’ve got to have an underdog mentality, prepared to fight for every yard, down and point against a club that knows how to win championships and won’t give up without an ugly fight. For Alabama, it can’t allow itself to feel like it “got lucky” by drawing Ohio State, a team that is statistically superior to both Oregon and Florida State. This may be the best game of the year, and, oh yeah, it means something.

In the beginning of your article when you mentioned the match-ups you made a major mistake when you referred to Baylor – Michigan. Being a big Michigan “State” fan it’s imperative that you don’t confuse these two schools. Go MSU!