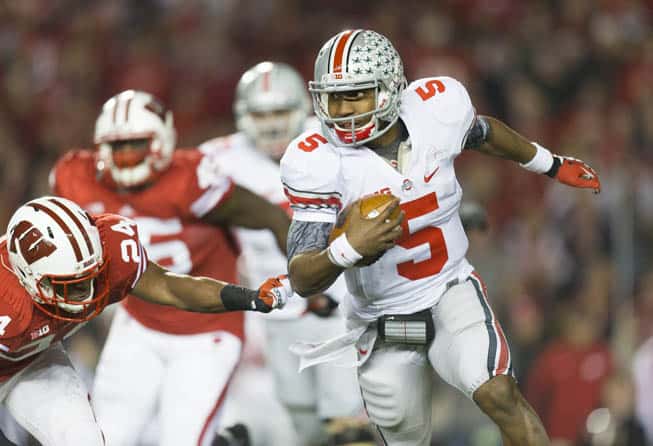 ESPN has announced six 2013 Big Ten football games for prime time telecasts on either ABC, ESPN or ESPN2. Two of the B1G games feature Notre Dame as the opponent.

The schedule kicks off on Saturday, Sept. 7 when Notre Dame travels to the Big House to take on Michigan. The game will be televised by ABC, ESPN or ESPN2 at 8 p.m. ET.

Listed below is the 2013 Big Ten game that were announced today for coverage on ESPN networks:

Thanks! Now if I only knew how many of those hid us from their news feed… :)

The big Ten was wise to insist in the ESPN contract that all ESPN/ABC games get national coverage. So if ABC is showing 3 or more games the mid west will get the BigTen on their local ABC’s and the rest of the country on ESPN2.

Between ESPN family and BTN a true Big Ten fan never has to order Game Plan.

no Nebraska? no Michigan State? only one game with Wisconsin?
i had picked other games …

These are prime time games. They are not daytime games. Many Big Ten teams prefer to play during the day, Especially after the weather turns.

They can add more later.

I see where September 7 lists ABC as an 8:00 option for Notre Dame – Michigan. But if I remember correctly, doesn’t ABC do the Richmond NASCAR race that weekend?

Notre Dame – Michigan was on ESPN in 2011…and a heck of a game it was. I can easily see this one doing the same, and if the game’s half as good I’ll count myself fortunate.

I am betting the local ABC affiliates/markets specific to the teams involved in the game will pick up the football games while the NASCAR gets pushed to ESPN. Market Specific instances

I hope that you are right. Where I live in Canada, the local cable company gets their American feeds from Detroit.

Really?!?! Notre Dame and Purdue on Primetime?!?! I’m about to puke

Go ahead puke C. They are just giving the people what they ask for. If the ND-MSU was at MSU this year, that one would be on there too! Go Irish, Go Boilers!

At least we will see Alabama in the Championship Game and Norte Dame needs the practice. :-)