ESPN’s College GameDay to Begin With Georgia at Clemson 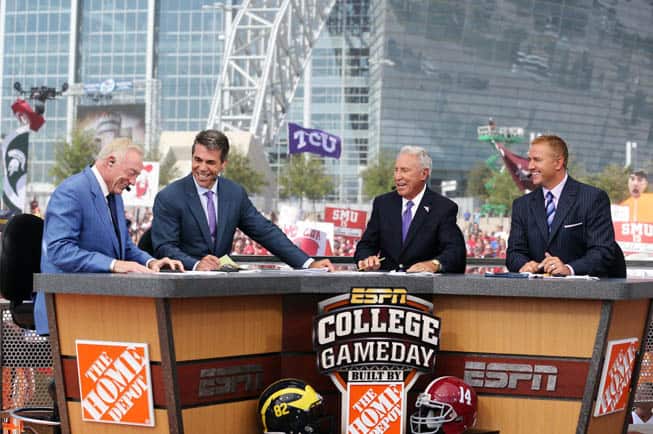 ESPN’s College GameDay Built by The Home Depot will kick off the 2013 season on Saturday, Aug. 31 in South Carolina for the Georgia Bulldogs at Clemson Tigers football game.

The show is expanding to three hours and will begin at 9 a.m. ET on ESPN. The past few years, the show began on ESPNU before continuing to ESPN.

For the season premiere at Clemson, College GameDay will run four hours from 9 a.m. ET until 1 p.m. ET.

The highly anticipated game between Georgia and Clemson, which kicks off at 8 p.m. ET on ABC, will feature two preseason Top Ten teams. Georgia is ranked 5th in the nation in the USA Today Sports Coaches Poll while Clemson is ranked 8th.

Still the only sports pre-game show I’ll watch, even though it means waking up at 7 am on a Saturday here in California (or 6 am to catch the first hour on ESPNU).

That’s 9 Eastern time he did say in California which is pacific time.

Andy is correct about the time, but Kevin is correct that the article says that you no longer have to catch the first hour on ESPNU because the whole show is now on ESPN.

That, and Andy is a contributor here. Just messin’ with him.

Well maybe if you had made that super clear at the start of the article Kevin … oh wait … never mind!

I love waking up in the fall to a pot of hot coffee, the birds chirping, and Lee Corso vaguely making sense about 25% of the time. He’s awesome.

One of the many great things about living in California: waking up and not having to wait all morning for football. Of course, I overdo it and hit the gym at 4:00 am so I’m home in time for the 6:00 GameDay start! At least there’s less guilt with the wings and pizza that show up at about 11:30! :)

As a Bulldawg, I hope Courso picks Clemson. We always lose when he picks us.

Bill, this is awesome and looks pretty much like my schedule other than attending the San Jose State opener versus Sac St. on Aug. 29th (yes I know … game of the year!) :)

Gameday at the Georgia Clemson game is the best choice. A great game being played on campus. I am grateful that there are some teams willing to play big games on the opening weekend

This will be a boring game, decided by a field goal in overtime. Gamescore 5 – 2

Boring game? met one sick puppy! This game could very well be the National Championship

ACC can’t compete with the big boys in the SEC…