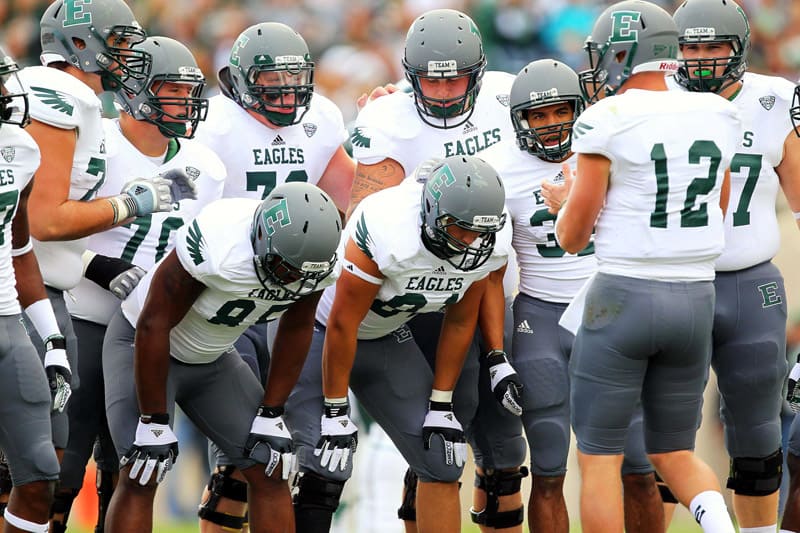 EMU will travel to face the North Carolina Tar Heels at Kenan Memorial Stadium in Chapel Hill on Sept. 9, 2017. The game will be the first ever meeting between the two schools.

The following season, the Eagles travel to face the Purdue Boilermakers. The third overall meeting between the two schools is slated for Sept. 8, 2018 at Ross-Ade Stadium in West Lafayette.

Eastern Michigan will take on another Big Ten school in 2019 when they travel to face the Illinois Fighting Illini on Sept. 14. It will also be the first meeting between the two schools.

EMU now has games scheduled against a team from a power five conference for each season through 2020. The Eagles play at Florida and Michigan State this season, at LSU in 2015, at Michigan State again in 2016, and then EMU hosts Michigan State in 2020.

Eastern Michigan, which finished 2-10 overall and 1-7 in the MAC last year, opens the 2014 season at home against Morgan State on Saturday, Aug. 30.

Please stop embarrassing yourself and the state and drop down to at least FCS, maybe D-II where you’ll still get pummeled by GVSU.

Eastern’s problem is the same problem Georgia State has. They are primarily a “commuter school”. That coupled with the fact that dropping the “Huron” nickname alienated most alumni and donors of any substance, thereby also drastically reducing community support, keeps EMU vastly irrelevant consistently. Coach Creighton has a mountain to climb in Ypsi.

I’ve been to Ypsi, I’d sure as hell be a commuter too. Yuck.

Been to about 6-7 games and yeah,while the fan base is small…its still a great place to see a game. And while Michigan State is actually going to visit EMU,Michigan,a mere 10 miles away,won’t even consider give EMU a home game despite the fact such a game could only help EMU. Another reason why Michigan sucks….

Why would Michigan EVER play at EMU? $100 says that MSU at EMU game is moved to a ‘neutral site’ at Ford Field just like MSU did with Florida Atlantic years ago

I think Michigan State will in fact make the trip to EMU. These games are part of the “Celebration of the State” series announced in 2009. MSU opens at WMU next season on a Friday night.

The EMU team is making progress. They held the Michigan MAC Trophy for 2 of the last 3 years for their victories over CMU and WMU.

Yet you don’t hear the same negative nabobs say anything about those schools. No, the Eagles will be just fine.

Let’s not listen to people unsatisfied with their own life. Their losers and they desperately want to find something or someone to criticize.

As an MSU alum living in Western Wayne Co. I’m super stoked that MSU is scheduled (Ypsi about 15 mins from me.) to play at Rynearson in 2020!

However, I do fear, like Zach said, that this game may indeed be moved to Ford Field. I personally dont think the good folks at EMU are quite ready for an opponent that will sell out the place (with many more tailgating etc.) and all the traffic associated with this. Hope I’m wrong because Rynearson is a great (Did I mention it’s close by?) place to see a football game.